We recently inadvertently used a photo of some tomatoes that we found on Google Images in a subcategory of our web site and which is also available at Salmonella Blog.  Getty Images have sent us an unreasonable letter stating that we have, supposedly, breached the copyright of some photographer called Wilf James for use of his photo in a thumbnail-sized picture and will "generously" only charge us a discounted licence fee of £381.15.  On knowing this , we immediately removed the photo and apologised, however (and even after an unseemly bit of begging by me for a reduction in costs) they have continued to be unreasonable and not waived the costs, which considering we only sold £420 of tomato products in the last 18 months is really mean, but then that's business.  Getty Images comment is (a) that's Steenbergs problem not Getty Images; and (b) that it is up to Steenbergs to ensure that there is no copyright in images on the Internet, however the law is outmoded and needs to be changed as this makes it unreasonably onerous on small businesses and individuals who cannot afford the time and money to determine the copyright hidden within an image and as they cannot see a chain of ownership of intellectual property cannot reasonably be expected to check authenticity of copyright.  I think it is time for the UK's law on copyright to be overhauled to take into account reality of Internet and modern technology - another example of lack of clarity is that every time you download a CD track from a purchased CD onto your computer or MP3 that may also a breach of copyright, but this is plainly unenforceable and probably not in the spirit of the law.

(i) For any intellectual property rights to be claimed, there should be genuine intellectual value in the item found free on the internet.  However, this was a generic photo of some tomatoes that was used in a minor subcategory as a cm x cm tiny photo that came up as your mouse waived over it.  Not much genuine value or intellectual effort in there, which I recreated in a few minutes (see below).

(ii) I am unconvinced that it is reasonable and equitable to make retrospective charges for an item that was prominently available without charge and without restriction as a top ranked picture on a global medium such as Google, and which a couple of seconds of research can be found on at least 2 other sites unacknowledged and without evidence of copyright.  This is like opening Wembley for a football match, letting everyone watch it, then pursuing people for ticket money after the event for photographing the match and publishing photos on the internet.

(iii) I believe that the onus should be upon the copyright owner to protect its copyright by using technology to prevent copying (which is available) and/or to make known that an item is subject to copyright when it is so.  This provides shoppers for content the opportunity to make a purchasing decision at a point of sale through weighing up economic value at an intangible (but real) checkout.  It should not be up to innocent users to make those checks nor to pay unreasonable licence fees later.  There should be a statute of limitations based on linkages that acknowledges that where a chain of ownership becomes broken it is up to the copyright owner to rebuild that chain and show effort in protecting that chain rather than seeking out overtly usurous consideration for innocent users of free content after the event.  In effect, this is like money laundering - how far down the chain are people guilty?  Obviously, the original money launderer is guilty then perhaps the one after that but by the fifth person down the line, they are completely unaware that any money they are touching is illegal so they cannot be complicit or guilty of being involved in the original crime.

(iv) Finally, I revert to point (i).  The copyright owner needs to demonstrate that there is value in its copyright.  I do not believe there is any significant value in this copyright.  To prove this, I have taken a photo of tomatoes that does the job that the illegally used picture is supposed to have provided valuable intellectual input into, and so worthy of the payment of economic consideration.  It took about 2 minutes to set up and photograph and 5 minutes on Photoshop, plus a few minutes to upload.  We had already got the tomatoes in the fridge, but that plus my time, gives the thumbnail a value of about £2.38 not £381.15 (which intriguingly is also twice the cost of the tomatoes from Morrisons).  And anyone who wants it it's free and you can use it... 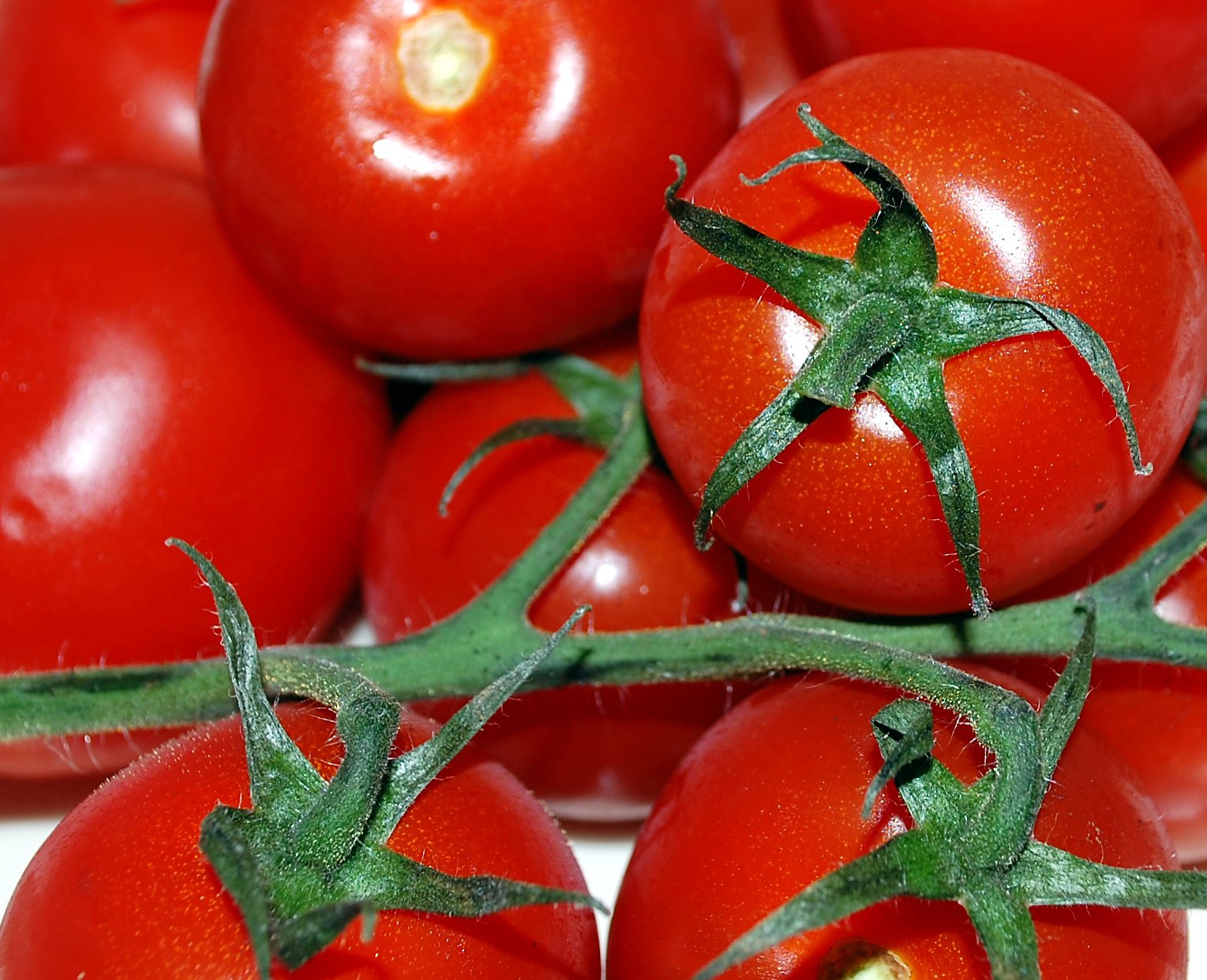 Since we started, we have tried to do all our own photography and, where we haven't, it is photography that we have been provided by suppliers.  This was the only photo (I am told) that we didn't take - a bout of human laziness for which we apologise and must obviously pay in blood.  While we theoretically have copyright in our own pictures and wording, we do not charge for this or stop people using it free of charge.  In fact, some of our competitors have even taken our wording straight from the web and then put it into their marketing literature, but we don't complain - it's a form of flattery - and life is about sharing the glories of the world rather than keeping them for oneself, selfishly.

Greed is so outmoded.  Bling is so dated.

My rant hides a more important point.  The internet kills the idea of intellectual property.  It has massacred the music industry, decimated the newspaper industry and will soon destroy the TV sector.  It has changed the way we communicate and purchase most products.  The days of making money out of controlling intellect are over.  In the same way that printing destroyed the control of intellect by the scribes and church, mass education took away the power of the political oligarchies formed around the landed classes, so the internet (and digital technology generally) is removing the value and power of politicians, media barons and the intellegentsia.

This is freedom, this is highly destructive and it's awesome.

The key to the future is collaboration.  Collaboration between scientists and academics is provided essentially for free through magazines and the internet (in fact the internet was invented to share scientific knowledge).  Collaboration is what drives Twitter and Facebook.  Collaboration is what will save people from themselves.  The mobile phone has connected more people together and done more to sort out third world poverty than all the charities combined.  Working together, connecting with each other and sharing is how we will all build the future together, rather than miserly behaviour to any overinflated perceptions of our own intellectual worth and value.

As a result, I have asked our web developers at Engage Interactive to address one of my bugbears about our site - that the photos are not searchable over the web nor are they captioned with a title, but just come up with a numerical value.  But we already are providing some of these photos over Flickr and I would also love to open up all our pictures on the blog to the wider world.

So the question is: do I just pay the money or do we pay it in tomatoes (that would be fun to send a pallet of tomatoes to the posh offices of Getty Images at 116 Bayham Street in London) or do we seek to challenge this stupid concept of seeking to charge for free content after the event through the Courts?

I add this update as this blog post has received a load of comments some 5 months after it was originally posted.  Rather than take it down after the resolution of the original complaint, I posted a comment below that explained what we had done (18/6/2010), so that anyone who read the piece could see changes as they developed over time, however the comments I have been receiving do not realise that payment was paid in full.  We accepted that we were wrong and, although it was an crass error by someone within Steenbergs, we settled the claim, paid the full amount to Getty Images and took down the tomato picture, replacing it with one of our own photos.  And as I say in several other comments, Steenbergs does not have a policy of using photos other than our own, which we take ourselves (several thousand of them - all of an amateurish Steenbergs standard), but out of laziness a picture was used rather than doing as we expect and taking an original photograph; I then had to take a picture at no cost in time or real effort as we did not need a professional photo in the first place.  Notwithstanding all of that, as enthusiastic amateurs, we place no creative value on our own IP within the retail web site and corporate web site, blog, Flickr, Twitter or Facebook accounts and people are free to use the content should they so wish.