A Short History of Spices 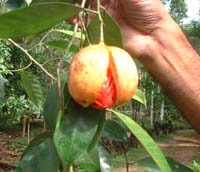 THE SPICE OF LIFE

Vast fortunes made and squandered, powerful rulers seduced, ailments cured, and nations discovered - all in the name of spice. Spices have always cast a spell on our imaginations. They flatter our senses: our sight with their vibrant colours, our smell with their enticing fragrances, and our taste with their distinct flavours.

Spices have been the catalysts of some of the greatest adventures in human history, from Christopher Columbus to Vasco da Gama, as well as being the driving force for the British East India Company and the British Empire, whose merchants turned London into the greatest spice market in the world for 200 years.

More dramatic, through the book Nathaniel's Nutmeg, is the transfer of Manhattan Island in 1667 to England in exchange for the nutmeg rich island, Run, to the Dutch. Spices energize our daily adventures in food and remind us of journeys to exotic places - and great nights out with friends and family.

Though the word "spice" didn't appear until the end of the 12th century, the use of herbs dates back to early humans. Early civilisations wrapped meat in the leaves of bushes, accidentally discovering that this enhanced the taste of the meat, as did certain nuts, seeds, berries - and even bark.

It is claimed that the lavish use of spices in ancient times was a way to mask the often unpleasant taste and odour of food, and later, to keep food fresh.  We don't believe this myth as the cost and value of spices has always been very high, so it would be unlikely that you would use something very expensive on cheaper, less fresh, food.

The first spice expeditions were organized in ancient times to ensure that these coveted commodities would always be in supply. Legend has it that: in 1000 BC the Queen of Sheba visited King Solomon in Jerusalem to offer him "120 measures of gold, many spices, and precious stones." A handful of cardamom was worth as much as a poor man's yearly wages, and many slaves were bought and sold for a few cups of peppercorns.

Arab traders were the first to introduce spices into Europe. Realizing that they controlled a commodity in great demand, the traders kept their sources of supply secret and made up fantastic tales of the dangers involved in obtaining spices. At the crossroads of land trade from India and sea trade from the Mediterranean, spices played a huge role in Phoenician trade. The Phoenicians were expert merchants and smooth navigators; so much so that at the end of the 14th century BC, spices were called "Phoenician merchandise." These slick middlemen knew how to offer their services to kings as well as pharaohs in order to extend their supply sites and possibly pave the way to India.

PEPPER REIGNS IN THE ROMAN EMPIRE

The Roman Empire, whose boundaries progressively extended from one side of the Mediterranean to the other, couldn't ignore these bewitching spices. Cleopatra herself used a "very stimulating" food to seduce Caesar. Huge quantities of saffron were strewn on the streets of Rome to celebrate Nero's entrance into the city. The reputed excesses of ancient Roman food consumption were apparent in the wide variety of seasonings used in the meals of the rich.  Long pepper, the Roman spice of choice, was as omnipresent as garum iberico (a special salty fish paste from Portugal) on the Roman tables. Without a doubt, spices had become status symbols.

In the biblical story of the Magi, three kings from the exotic reaches of the Orient give gifts of gold, frankincense, and myrrh to the newborn Jesus Christ. Frankincense and myrrh were rare, very expensive spices of the time. And in the 5th century, the Prophet Mohammed, from the merchant tribe of the Quora chites, took advantage of the spice trade to spread his Holy Message.

SPICES IN THE MIDDLE AGES

From the 10th century on, the crusades prompted a rediscovery of spices; seasonings made an obvious comeback to the tables of the great and powerful European courts. It was mainly from the Orient, overland via Arabia and the Red Sea, Egypt and the ports of Venice and Genoa that spices reached Britain. Venetian merchants, strategically located midway between the Levant and Western Europe, became the great middlemen of the spice trade. They sent their cargoes via Flanders and the Low Countries for sale in local markets to supply the Northern European countries.

Certain spices were worth so much that one of them even became currency: pepper. In court, litigants bribed judges with spices. A prototype of sugared almonds, some spices were covered in honey in order to disguise them as candy. Their culinary and medicinal uses overlapped, and grocers and apothocaries often worked in the same companies. Besides traditional black pepper, some of the other prized spices of the era were long pepper from Sumatra, ginger, cloves, cinnamon, nutmeg, and galangal (a ginger-like spice from Southeast Asia).

As with any great discovery, the opening of the Southern seaboard spice route was no accident. Portuguese navigators and geographers had been working at it for over a half-century. Henry the navigator, who encouraged exploration of the African coast, was the most famous of them. Christopher Columbus set sail in 1492 to head West and find gold and spices, hoping to hit the Indian coast where these precious commodities could be found. Controlling and supplying the spice market were key objectives for the Portuguese and Spanish powers at the time in their goal to overturn the Arab and Venetian monopoly in the Mediterranean.

Poor old Venice. The virtual monopoly - that it had held of the European spice trade and which had made the Serene Republic rich - was doomed. One day in May 1498 Vasco da Gama anchored his ship off the cost of India. The Arab merchants were shocked to see a Portuguese man on Indian shores. "We are looking for Christians and spices," stated the Portuguese navigator, and with that, the Arabs saw their monopoly crumble. The sea route to India was discovered at last.

Three months later da Gama set off on his return voyage to Lisbon, bearing news that the ruler of Calicut was prepared to barter cinnamon and cloves, ginger and pepper for gold, silver and (strangely) scarlet cloth. The European spice trade passed into the hands of the Portuguese, who held on to it - with difficulty - for a century, only to lose it to the Dutch, whose trade with Java and the Spice Islands, as the Moluccas came to be known, led to the formation in 1602 of the powerful Dutch East India Company.

By the 1680s, the Dutch had established a total monopoly of the highly profitable trade in cloves and nutmegs, while the Portuguese retained a corner in the cinnamon business. At this period, British cooking was still heavy with ginger and pepper, cinnamon, cloves and nutmeg. The food of Italy, Portugal, France, Holland and Germany was similarly spiced and scented.
It was not until towards the middle of the seventeenth century that the British East India Company held a monopoly on all trade with India and that the British began developing its cooking along lines we recognise today. Spices and sugar were readily available and became relatively cheap, and were therefore less prized and used with more discretion. But the economic value of these products declined as farming sites increased.

The Dutch jealously protected access to the Moluccas for fear of seeing their clove and nutmeg trees exported to other regions, which would have ruined their monopoly. Thievery of this sort was punishable by death. After many attempts, a few pepper and nutmeg trees were successfully transplanted to Mauritius Island. This eventually led to a dispersion of plant production sites across Dutch, English, and French colonial empires, which involved spices in addition to coffee, cocoa, and many other plants. The tight reins on the industry were loosening.

WHERE ARE WE NOW?

Today, colonial empires have all but vanished, spices are used in almost everything we eat, and costs are relatively low. It is hard to imagine that these fragrant bits of leaves, seeds, and bark were once so coveted and costly. For centuries wars were waged, new lands discovered, and the earth circled, all in the quest of spices. However, many of the spices have other purported properties as well as their culinary uses, such as nutmeg which is believed by some to be an aphrodisiac.

Thanks to the vogue of international travel, we can engage in our own spice conquest now. We can stroll through market stalls around the world where spices, perfumes, and exotic plants and flowers enchant the senses. And when we take these scents and tastes of far-reaching places back to our homes, we are again compelled to discover the allure of the unknown.