Steenbergs' woodland offers lots of opportunities to create a rich and diverse space for nature, and to help tackle climate change. Here, we explore some of the issues for UK woods and how we will address these.

We have a woodland in Wales.  Why Wales? Because Sophie’s family comes from Wales, in and around Talgarth, but mainly because we love nature.  That is what the wood is really about – doing something for nature.  Environmentalism can be quite negative, telling us what we should not do, but planting trees and creating a natural space feels much more positive and uplifting.

Here we explore some of the problems facing woodlands in the UK, then how we will tackle these in our wood.

13.2% of the UK is covered in woodland, up from only 4.7% in 1905, but the rate of woodland expansion has slowed recently (Reid et al, 2021).  Most of this expansion has been in Scotland (accounting for two-thirds), with a quarter in England and a tenth in Wales.  Both Scotland and Wales contribute relatively more to the overall total at 18.8% of land area for Scotland and 14.9% for Wales (Reid et al, 2021).

There is some way to go compared to Germany and Poland where 33% and 30% of their land area is covered in woodland.  There are additional trees in areas outside of woods, in hedgerows and in parkland, however this still does not get us anywhere near to one-third.

Planting more trees, enlarging existing woods and increasing their connectivity in the landscape is important for providing ecological services to nature and people, as well as playing their key role in climate regulating.

But it is not just about the number of trees.  We need, also, to look at the condition of these wooded habitats, because it is the health of woodlands that determines how well they can provide vital ecological services.  A 2020 assessment of woodland ecological condition by Forest Research found that only 7% of native woodland is in good ecological condition, with 92% in an intermediate state (Ditchburn et al, 2020).

Drilling down further, all woodland types lack deadwood, veteran trees, and open space, many were found to be lacking in levels of regeneration and had poor age distribution (with only one or two age classes present), but most were better in having native tree species in the mix.

We are quite lucky in that there have been hedgerows and scrub areas here for many years and some of the self-sown trees are decades old, with areas of established woodland and some old oaks on a knoll that are 150 years old.

The trees in the 6 acres of established woods are about 50 years old.  Two-thirds of this is identified as wooded areas or scrubland in maps dating back to the 1880s.  However, except for the old oaks, these areas are more likely 40 – 50 years old, perhaps a bit older.  The hedges are, also, old and well established.  Because the hedges have not been cut for 20 years, they are the main focus of the natural spread of the woodland, where hedges have expanded and self-sown trees seeded in the fields. 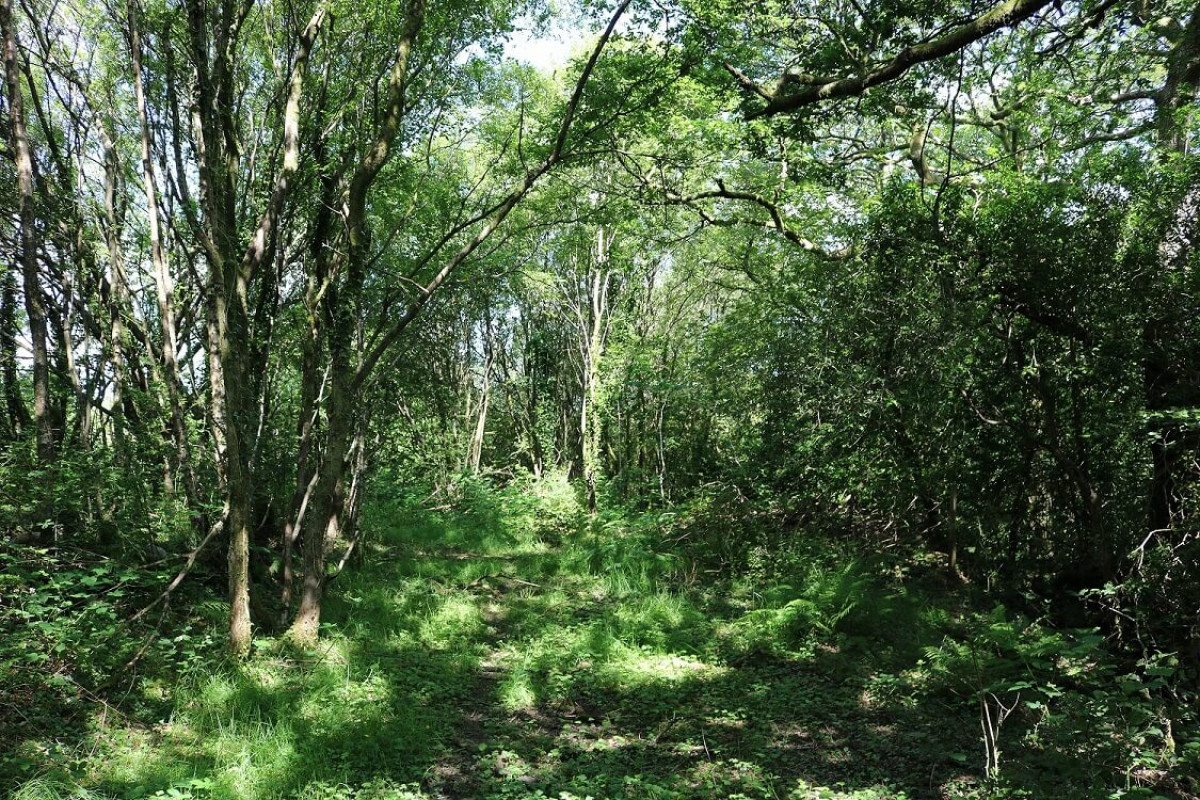 So, while many of the trees are recently planted, one-third of the trees are a mix of medium and old-aged, giving a surprisingly good age distribution to this young woodland.  Then, the new and older trees give a good mix of native (or honorary native) trees: alder; ash; blackthorn; downy birch; hazel; hawthorn; field maple; sessile oaks; sycamore; and willow.

Another important issue is that many woodlands are relatively isolated “wooded” islands with little connectivity to other semi-natural habitats, for example many are surrounded by intensively farmed land.  This reduces geneflow and species movement between woodland patches.  Hedgerows provide excellent wildlife corridors, as can roadside verges when they are left untouched.

As nature is our passion, let’s think about biodiversity.  The species richness of vascular plants in broadleaf woods increases with the cover of broadleaf trees, growing until about 26% cover, then tails off after about 30%; in contrast, species richness does not change with conifer cover (Reid et al, 2021).  High plant species richness correlates with higher broadleaf cover, but also suggests that open spaces, such as glades and rides, are important to optimize plant species in our wood as too much cover may be detrimental to species richness.  Indeed, there is always a lot of biodiversity at the edges of habitats, so where one habitat changes into another.  However, this analysis was done on hectads (10km x 10km) which is a large area, and, also, ignored a lot of important species that are found in older woodlands, such as fungal, bryophyte, lichen and saproxylic communities.

A concern for biodiversity is that although woodland cover has increased, woodland wildlife continues to decline.  For overall UK trends, there has been a 41% fall in woodland butterflies between 1990 and 2019, a 29% decline in woodland birds between 1970 and 2018 and woodland plants have gone down by 18% since 2015 (Reid et al, 2021).  However, these indices do include only a small range of species, so are not necessarily directly relatable to what is happening on the ground in any particular location.

What has driven this are fundamental changes in the way we interact with nature.  It is people’s switch from utilising fields and woods as a common, low intensity natural space that are relatively open resources for provisioning to closed, intensively farmed agricultural land or fairly undynamic leisure space (amenity woodlands that provide cultural services).

For example, some butterflies coevolved with humans and to the dynamic wooded ecosystems that we created, where coppice rotation resulted in younger growth that would have traditionally been used for charcoal and firewood, thatching materials and weaving.  This favoured butterflies like the pearl-bordered fritillary, which are now declining.  In contrast, generalists like the speckled wood butterfly have increased their range.  Coppicing, also, made open spaces that birds, such as nightingales and nightjars, preferred.

There is no way that people will return to those older ways of life and interact so richly with woods, valuing them for provisioning services, so we will have to accept some change.  Nevertheless, we will need to consider how to inject some natural dynamism into our wood rather than just let it become a static, dark and silent, covered space.  We are not after creating a plantation but a biodiverse natural space with trees as the lattice in which other species can thrive (flora, fauna, fungi, microbes etc.).  There is nothing like a fallen tree to create sudden, furious activity within a woodland or livestock, such as cows or pigs, to disrupt the status quo by grazing and scruffling up the ground.

The key for us is sympathetic management – it is not a big enough space for a grand wilding project, so some intervention will be needed, but this will be kept to a minimum.  In fact, we are here in North Yorkshire, so there is little chance of overly intensive management.

In a nutshell, our plan is:

Also, we will consider introducing some animals (most likely temporarily) to keep the open space open, graze the vegetation and break up the ground.  We will look to how water flows across the space and how this interacts with our land; currently, there is some poorly functioning drainage in place, but perhaps this should be removed to allow the water to flow across the land in its own way.

Our woodland is in a rich cultural landscape that has been influenced by how people have lived with nature throughout history.  Garnant and Gwaun-Cae-Gurwen were coal mining towns and there were small coal mines all around the wood, even with parts of Garnant Colliery on site.  There was, also, a tramway that cut across the wood from the New Cawdor Colliery to the railway line that ran to Gwaun-Cae-Gurwen.  Nevertheless, most of the land was farmed – rough pasture – throughout its industrial period.  So, we need to be mindful of this cultural heritage as we create our woodland, for example the line of the dismantled tramway is being kept unplanted.

Finally, longer term, we need to connect our wood to other local natural spaces, so species and genes can flow across the landscape and biodiversity can be optimised.  There is the relatively barren common land at Cwm Helen and Mynydd y Betws plus better, wooded areas at Garnant Golf Club, which offer local semi-natural habitats that we will need to link up with and so enlarge the available space for nature.  Our conservation advisers, Menter Cadwraeth Natur Cymru, are best placed to help us with this.

We are really excited by Steenbergs woodland project.  It offers us loads of opportunities to create a rich and diverse space for nature – and to help tackle climate change.

“Nature” covers the environmental problems of biodiversity loss, land use changes, nutrient cycling, deforestation, pollution, and water, as mentioned in the previous blog.