What is Steenbergs’ carbon footprint?

We seek to offset our carbon footprint so it is pretty small.

For 2014, Steenbergs has purchased carbon offsets for 72 tonnes of carbon dioxide (i), up from 17 tonnes in 2013.  This has increased, because we are now retiring even more of the greenhouse gases from our business.  This is in addition to using solar energy for 45% of our electricity usage and recycling as much of our waste as possible.

In previous footprints, we included direct greenhouse gases from energy consumed and business travel, together with those from the transport of goods to and from Steenbergs (ii).  In effect, this is the climate change impact resulting from what we do.

However, in looking more closely at our products’ lifecycle from farm-to-landfill, we were excluding virtual carbon embedded within our packaging and ingredients.  So that’s the greenhouse gases arising from farming and the manufacture of glass jars, steel lids and tins, together with impacts resulting from the disposal or recycling of packaging by our customers.  But this embedded carbon (or traded carbon) should be brought into consideration, or an oil trader becomes very green when you ignore the oil (iii).

This would be fine if our suppliers offset their climate costs, but they don’t.

82% of the carbon footprint in Steenbergs’ products is indirect: 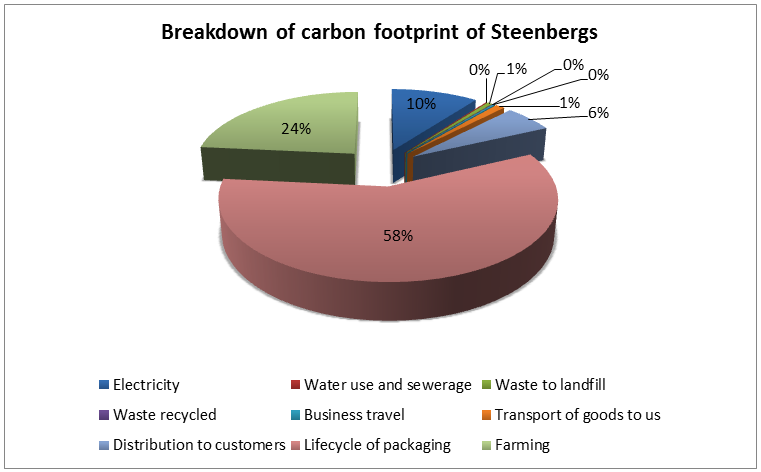 Breakdown of carbon impact from Steenbergs in 2014

42 tonnes of carbon dioxide relates to packaging, compared to the 13 tonnes from our business.

As for farming, we had naively assumed that its carbon costs are analogous to the carbon captured in the plants themselves.  Mike Berners-Lee in How bad are bananas? gives zero as the carbon footprint of an apple plucked from a tree in your garden.

Initial research gives the impact may be 0.87 kg CO2 per kg of spices; this compares to 12kg and 19 kg CO2 per kg of beef and lamb.  Farming might add another 17 tonnes carbon dioxide (iv).  Because this relates to what we sell, we will need to dig deeper.

But using this, Steenbergs’ total footprint over the lifecycle of its products is 72 tonnes carbon dioxide every year, or 6 families’ worth of carbon.  This has been offset through ClimateCare, which neatly uses projects such as its LifeStraw project that combine Steenbergs' concern for water with issues of climate change.

Putting this into context, spices and herbs contribute a tiny proportion of the carbon footprint of a meal.

For example, the spices in rogan josh are 0.1% of the total footprint versus 89% for the lamb, or 0.5% in tandoori chicken compared to 85% for the poultry.  The herbs in spaghetti bolognaise are less than 0.01% of its total carbon footprint.  And last month we calculated the carbon footprints of your cup of tea, coffee and hot chocolate.

(iv)   I am unclear whether these figures are for the lifecycle of spices and/or include carbon captured in the plants themselves.  47.5% of carbon is locked in plant material, equivalent to 1.7kg CO2 per kilo.  So I am confused…