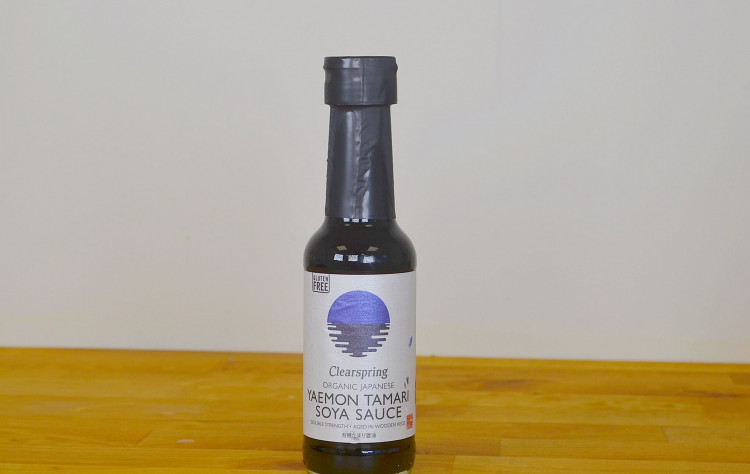 Clearspring Organic Tamari is a double-strength, gluten free soya sauce made using organic whole soya beans and uses twice as many beans for each bottle as ordinary soya sauces. This high proportion of soya beans results in a smoother and more balanced flavour.

Made to a 500 year old recipe using traditional processes and equipment handed down from generation to generation and naturally fermented and aged in cedarwood kegs over two summers. Clearspring Organic Japanese Tamari Soya Sauce has an award-winning flavour that's rich, full bodied, complex and concentrated - but never overpowering. It's perfect as a dipping sauce, as a traditional accompaniment to sushi and sashimi, and can be used as a condiment to give depth of savoury flavour to salad dressings, marinades, sauces, stir fries and cooked fish, poultry, meat and vegetable dishes.

Clearspring  'Organic Japanese Yaemon Tamari Double Strength' was founded by the Aoki Yaemon family in 1871. The family has been making traditional Tamari for nearly 150 years in Aichi prefecture, Japan. The craft of making our authentic Japanese Tamari involves handmade techniques, whole organic soybeans, Koji culture, water and sea salt. This tradition has been perfected and passed down from father to son for generations. The resultant Tamari is of a truly premium quality, whilst also being organic and gluten-free – all of which sets it apart from others. Tamari production usually starts in winter when the condition is ideal for making Koji. The process begins by soaking the whole soya beans in well water. It is then steamed until soft and crushed and made into small balls called ‘Miso Oama’. To start the Koji (Aspergillus spores) fermentation on the soya beans, a sprinkle of roasted barley flour is added to activate it. This is then dusted over the balls and placed in a temperature controlled room for 3 - 4 days. This is the most crucial time for a brewing master as this process will determine the quality of the Tamari. The master's art is in the nurturing and overseeing of the Koji process to perfection.

The Koji and beans are then mixed with a brine solution (sea salt and water) and placed in a large cedar wood keg. This mash is called ‘Moromi’ and here the mixture will spend at least two summers to ferment.

After the long ageing process the Moromi is placed in cloth sacks and pressed to extract the dark liquid; raw Tamari. The soy oil from the liquid is removed and Mikawa Mirin is added to prevent further growth of the natural Koji yeast. The Mikawa Mirin contributes to the aroma and deep rich flavour of Tamari. It is then bottled and ready for use.

Double strength
This product is Gluten-free, is Organic and is Vegan.