Steenbergs Wild Pepper or Voatsiperifery Pepper (Piper borbonense) is wild harvested from a Madagascan natural forest on an organic cocoa estate, which sits right next to the one of the estates where we source pink peppercorn... 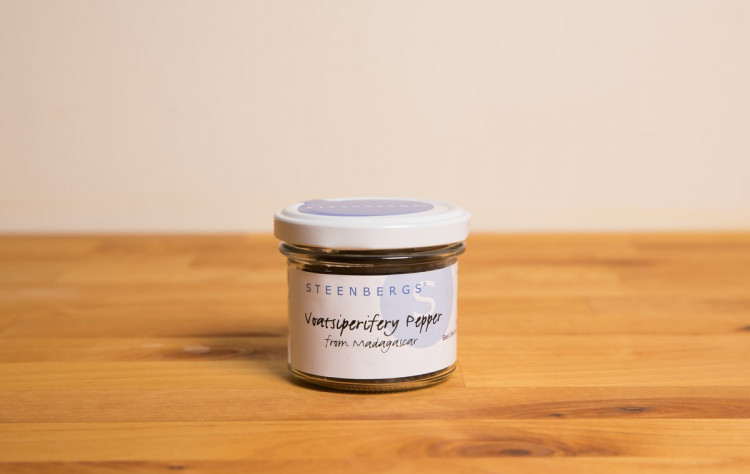 Steenbergs Wild Pepper or Voatsiperifery Pepper (Piper borbonense) is wild harvested from a Madagascan natural forest on an organic cocoa estate, which sits right next to the one of the estates where we source pink peppercorns on the east coast of Madagascar.  They are called Voatsiperifery deriving from “Voa” meaning the fruits and “tsiperifery” which is the Malagasy for this pepper vine.  The wild pepper vines grow high in the trees, and the fruits only grow on the young, new grown shoots and are hand-harvested from the wild by farmers who go into the forest especially to pick them once a year.

The wild pepper berries look similar to the comic-book-like bombs of the cubeb pepper (sometimes called Java pepper or tailed pepper) but are somewhat smaller.  Voatsiperifery peppercorns are 3mm long ovals with a 5 – 6mm long tail.  Wild Madagascan Pepper has a brown-black colour similar to normal black pepper.  For some photos and a little bit more information on Madagsacan wild pepper, try Axel's blog.  The flavour of these Voatsiperifery peppercorns is earthy and woody taste, with a certain citrus floweriness that gives some freshness to the palate.  The Tsiperifery flavours are long lasting.  Christine McFadden in her book "Pepper" describes the flavours as follows: "Gingery aroma with hint of cloves.  Complex flavour - woody, resinous, sweetish.  Pungent bite."

As for cooking ideas, use tsiperifery pepper in the same way as black pepper, grinding it onto food as an exotic finishing flavour where you will get the best wow factor for having it.  To be more authentic, you could make this Madagascan Chicken Stew or Madagascan Spicy Salad but in both cases using Madagascan wild pepper rather than black pepper.

Steenbergs Madagascan Wild Pepper is another specialist spice that Axel Steenberg has had great fun tracking down and is only sold to Steenbergs' web customers, and is not sell to trade.  If you need further information, please call us on 01765 640 088 or email to enquiries@steenbergs.co.uk.  If you live close to us, you can pop in, but it is best to forewarn us as we are a food factory not a shop per se.