Steenbergs Organic Rosemary has that characteristic strong, robust flavour that you expect from great home-grown rosemary.  Organic rosemary's needle-like leaves are very aromatic, with a slightly woody and highly pungent perfume, which is... 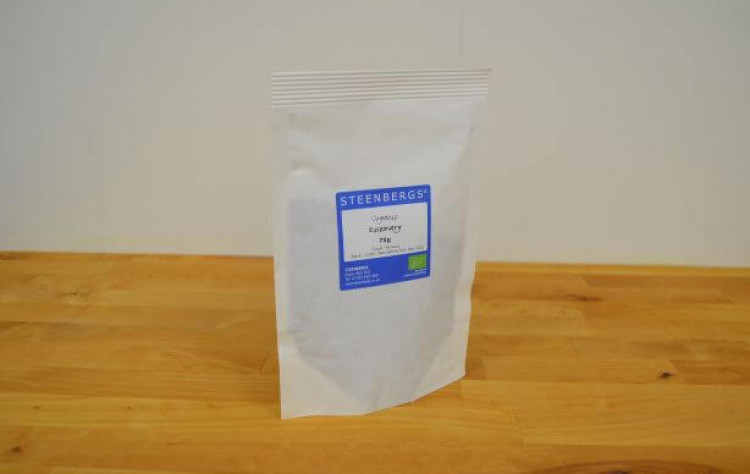 Steenbergs Organic Rosemary has that characteristic strong, robust flavour that you expect from great home-grown rosemary.  Organic rosemary's needle-like leaves are very aromatic, with a slightly woody and highly pungent perfume, which is not lost by long cooking. Use Steenbergs organic rosemary in lamb, pork and chicken dishes, giving them a sunny, Mediterranean feel.  Organic rosemary is ideal for those wonderfully easy and delicious casseroles with flageolet beans and either chicken or lamb.  Steenbergs generally buys its organic rosemary (cut or rubbed) from Turkey.

Rosemary is a hardy perennial shrub, Rosmarinus officinalis.  Rosemary grows to 1.5 metres high (5ft) for the upright variety or the low-growing prostrate variety (Rosmarinus prostratus) gets no higher than about 30cm (12 inches).  Rosemary has small bluey white flowers, or pink or white flowers.  Rosemary is characterised by its woody stems and silvery-green, needle like leaves, which have a longitudinal crease down the middle.  The leaves grow to 30mm (1 inch) and have a dark-green upper side and a gray-green underside, giving the overall silver-green appearance of its foliage.  To process, bunches of leaves are cut and dried in warm, well-aired dark places to fix the volatile oils in the leaves.  when the rosemary leaves have dried, they are rubbed off.  The aroma of rosemary is very fragrant, pine-like with a head-clearing eucalyptus volatile oil aroma.  The flavour of rosemary is similarly refreshing pine-like and camphorous, with an astringent, warming, nutmeg and pepper taste.  The flavour of rosemary is very dominant and so works best on its own rather than within rubs or herbal blends.  For more on rosemary, try Ingredientia and Wikipedia.

Rosemary's astringent freshness works well against starchy foods, such as breads, or against fatty rich meats like pork, lamb or duck.  Rosemary works well in tomato sauces, but I suggest you use a large sprig and then remove after about 15 minutes of hubbling away as by then most of its benefit will be infused in the sauce and too much longer and the rosemary can become overpowering.  It also can be drunk as a digestif when made into an herbal infusion to counter the richness of a heavy meal - pick it straight from the garden for the best impact.  For more inspiration, try Steenbergs, Allrecipes or the BBC website.

These mini bulk bags of rosemary come in the new Steenbergs recyclable or compostable plastic free packaging, just recycle with your other paper. 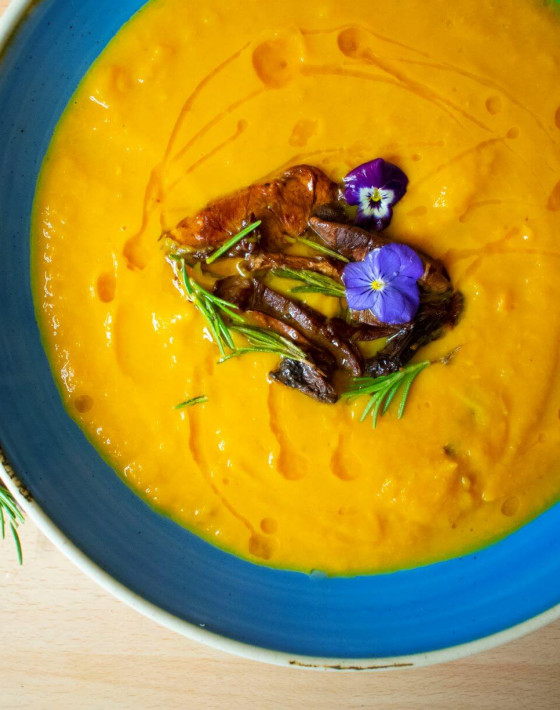 "A deliciously creamy squash soup with extra comforting flavours of rosemary and umami porchini mushrooms!" Thanks to @nikibakes_uk for the...