Ripon Water Walks - Along The Ure

I mentioned in my first blog about walks in Ripon in North Yorkshire that I did not believe that Ripon had only been settled as a monastery in 650AD.  I believe this basic historical fact about Ripon's history even less now after walking along the River Ure.  Firstly, wherever you walk along the Ure and also nearly everywhere you are in the Dallamires area south of the River Skell, you are watched over by the brooding presence of Ripon Cathedral.  It seems to be watching you, eyeing you up and saying: what are you doing, where are you going and are you sure you should really be doing that because I am watching you?  Secondly, Hewick Bridge by one of the markers that indicate the edge of the sanctuary of Ripon was an important bridge in the Roman times connecting a settlement near the bridge/river with Isurium Brigantium, the major Roman town that is now the ancient village of Aldborough.  There is no physical evidence just the circumstantial thoughts of someone who has walked the land and feels that this was just too good a location to ignore.

On Saturday 23rd May, which was a warm and sunny evening after a scorching day, I parked my car on Magdalen's Road and started my walk along the footpath over North Bridge Green.  North Bridge Green is a floodplain for the River Ure that stretches from the north side of North Bridge and follows the south side of the River Ure as it arcs round from the Bridge to where it meets with the River Skell by Fisher Green.  It is public land that floods regularly and is a green swathe of grass, however it would be great if more trees were planted, which would allow the ground to hold more water when the river is in spate and would also give more woodland for local biodiversity to thrive.

It's a gentle 30 minute walk along the edge of the river, which languidly flows towards the Skell.  The water had a peaty brown hue to it and looked temptingly cool on an evening like it was.  There are shingle beeches every so often that you can wander down to and watch the river flow past, look for fish, watch the ducks swimming and the insects swarming on the water.  There were some teenagers enjoying skimming stones across the water, but most were enjoying the delights of "Over the Rainbow - The Final"  or some other TV delight. 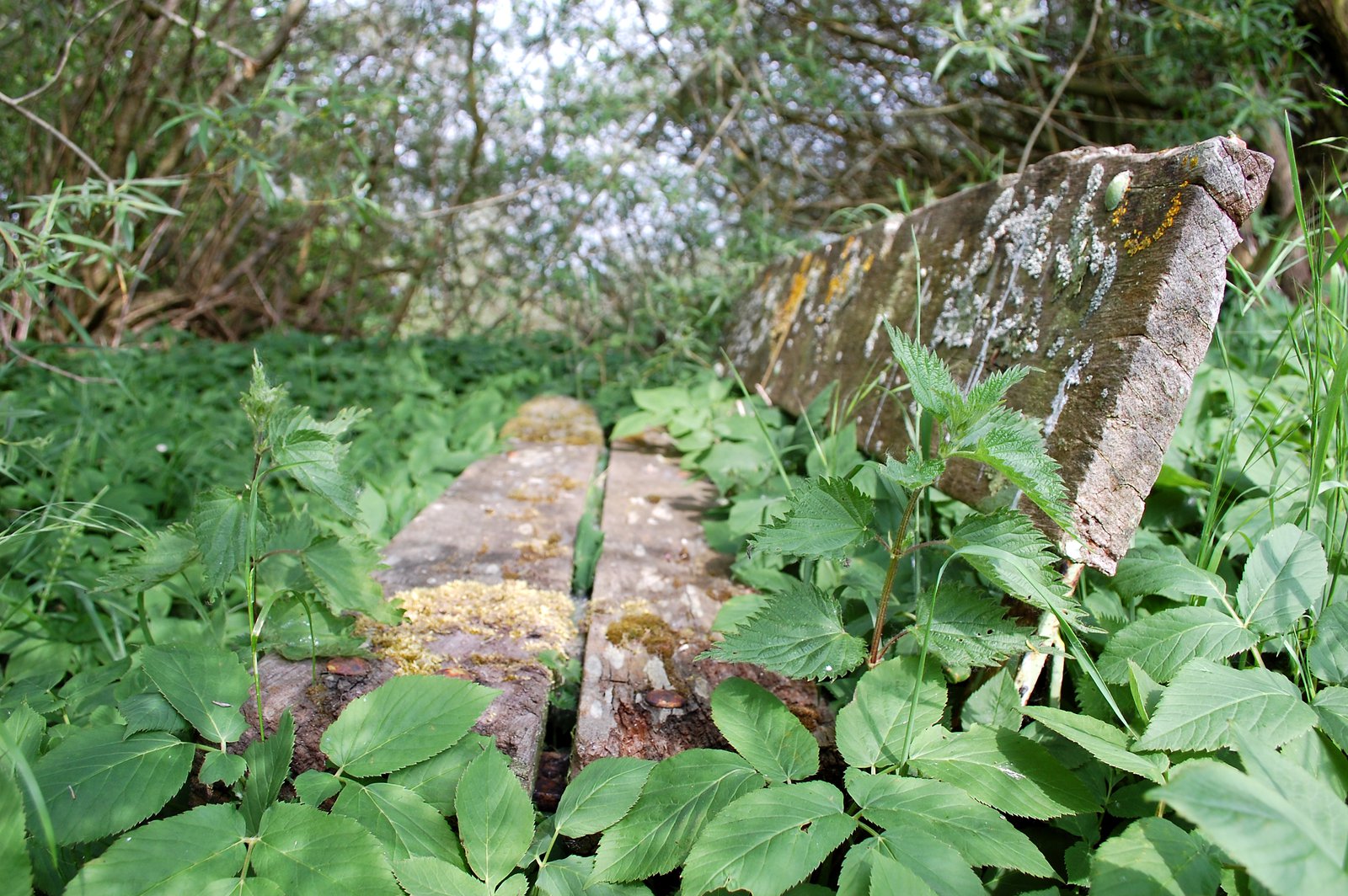 Around half way around, the land rises to a small height where you can look across to Ripon Cathedral as it keeps an eye on you, before you slide back down to river height.  As you get closer to the meeting of the Rivers Ure and Skell, there's an old bench hidden beneath bushes and covered in nettles, where once there must have been a lovely river view - a romantic sign of decay - while a newer bench by the meeting of the rivers has no seat and just the concrete base - a sign simply of neglect.  Once again, you can turnaround and see Ripon Cathedral checking up on you... 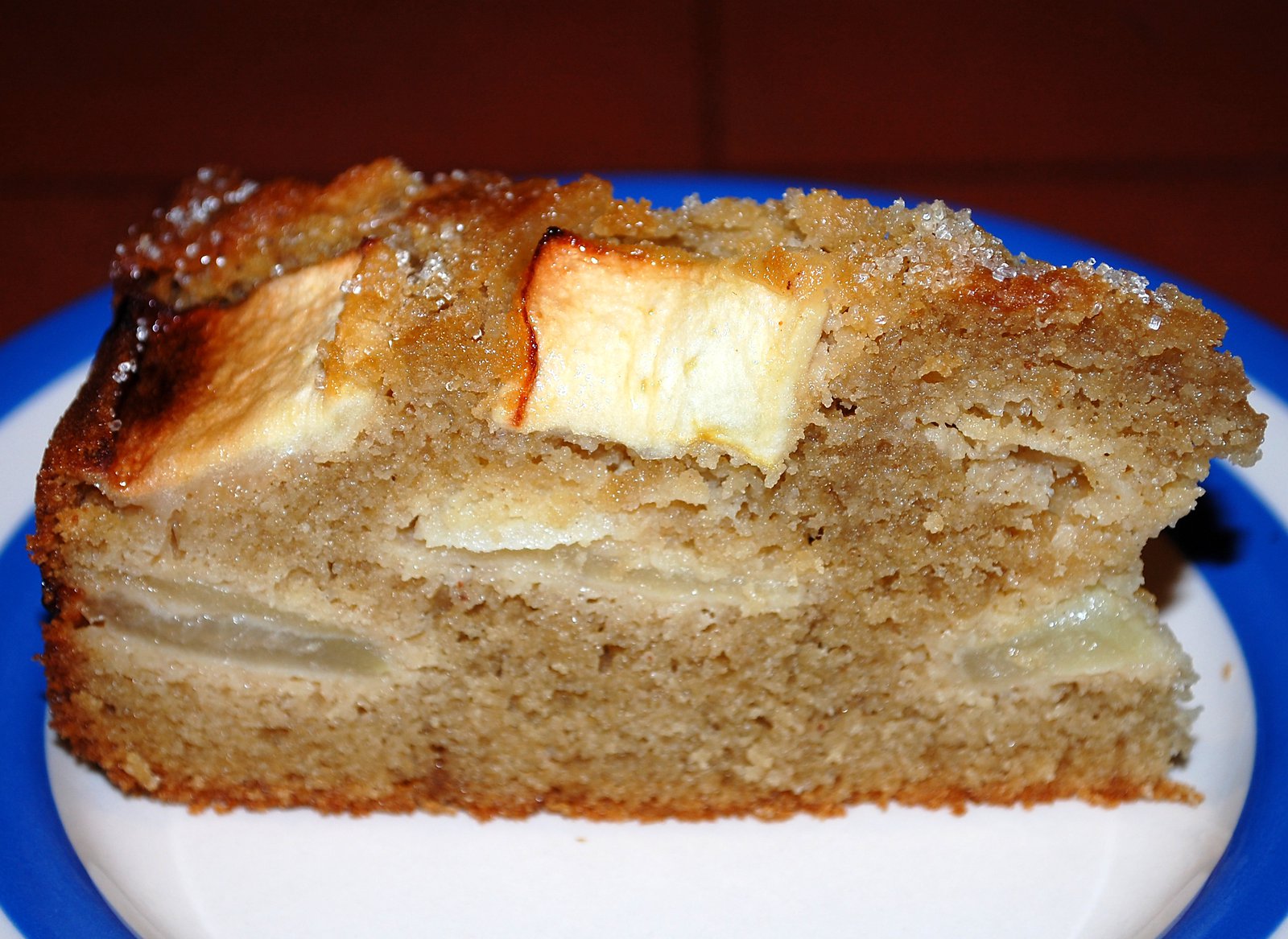 At  Fisher Green, we cross over the stepping stones across the River Skell and then follow the footpath along the south side past Yorkshire Water's wastewater treatment plant coming out on a field called The Green, which is opposite Ripon Race Course.  It flooded here last December after a snow melt in the Yorkshire Dales and covered over the road, and the field itself floods at least once every winter. 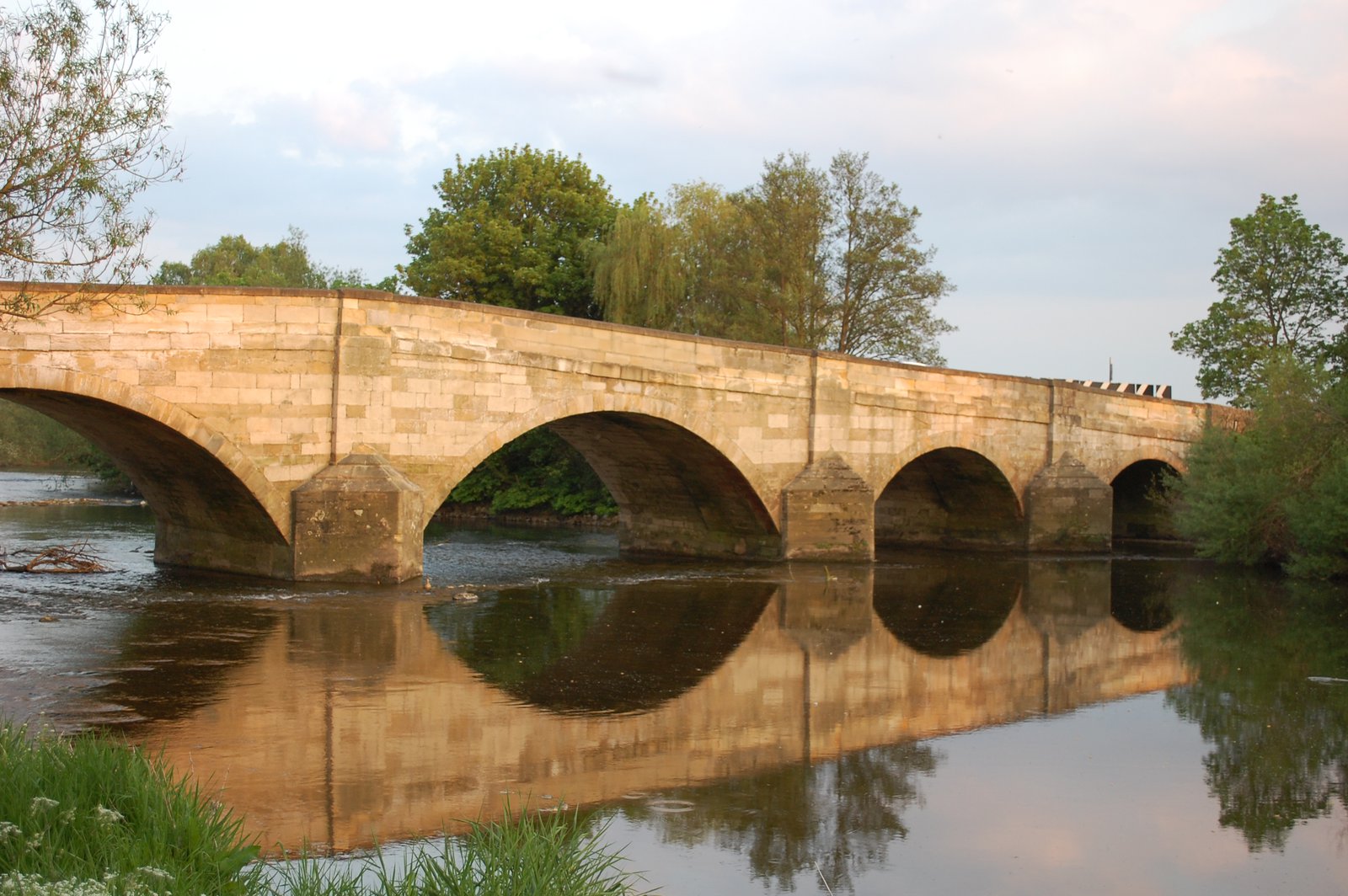 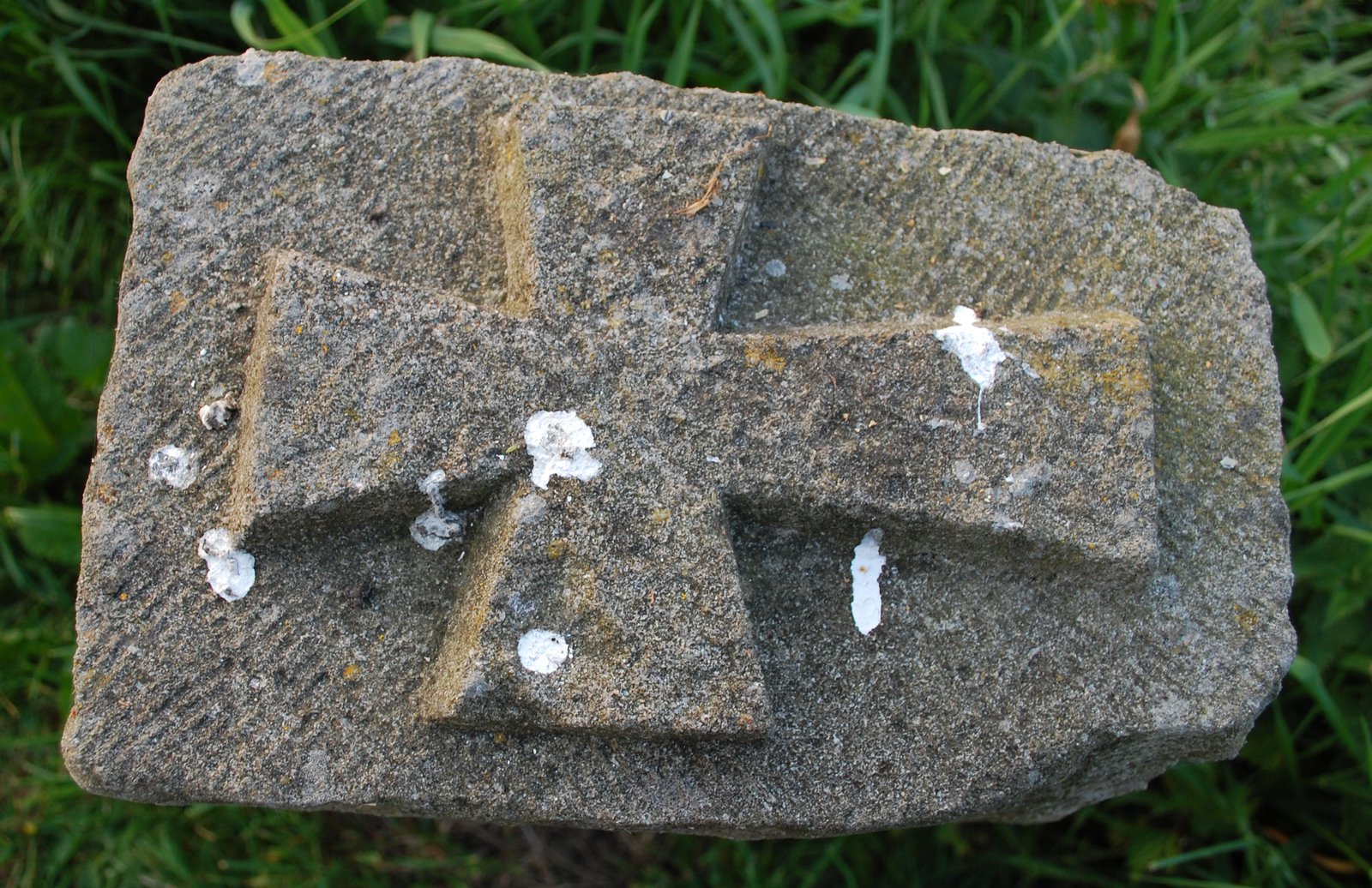 At Hewick Bridge, you need to be careful as you cross the bridge as it's busy and there's no footpath.  Just over Hewick Bridge, there's a footpath and a sanctuary marker that marks the start of a walk called the Sanctuary Walk, where you can walk around the ancient limits of one league from the monastery.  We just use the part that goes along the northern banks of the River Ure.  A few yards in from the start there is a concrete section that goes into the river and comes out the other side - I always thought this was a car park but apparently this is where tanks used to cross over the river.

This section of the walk to Sharrow and back to North Bridge takes another hour, bringing the total walk time to a good 2 hours.  This section is a decent walk in the countryside, save for the sound of cars constantly moving.  Soon you blot these out and can hear only the sounds of the birds with their evening chorus - swallows, thrush, ducks, blackbirds, pigeons, the high pitched chirrup chirrup of house martins and then the loud honking of a couple of geese as they flew overhead like 2 bombers.  The trees and flowers alongside the river were in full bloom - hawthorn, chestnut, white butterbur, nettles, wild garlic, bluebells and then you had the white parachute seed heads of the the Old Man's Clock's and downy female catkins on some small shrubby willow bushes (I think it's a type of Osier Willow or Salix viminalis as the leaves are definitely spear shaped, but I am not convinced about this), as well as a patch of forget-me-nots in the middle of nowhere as if someone had just dropped a pack of seeds as they wandered idly by. 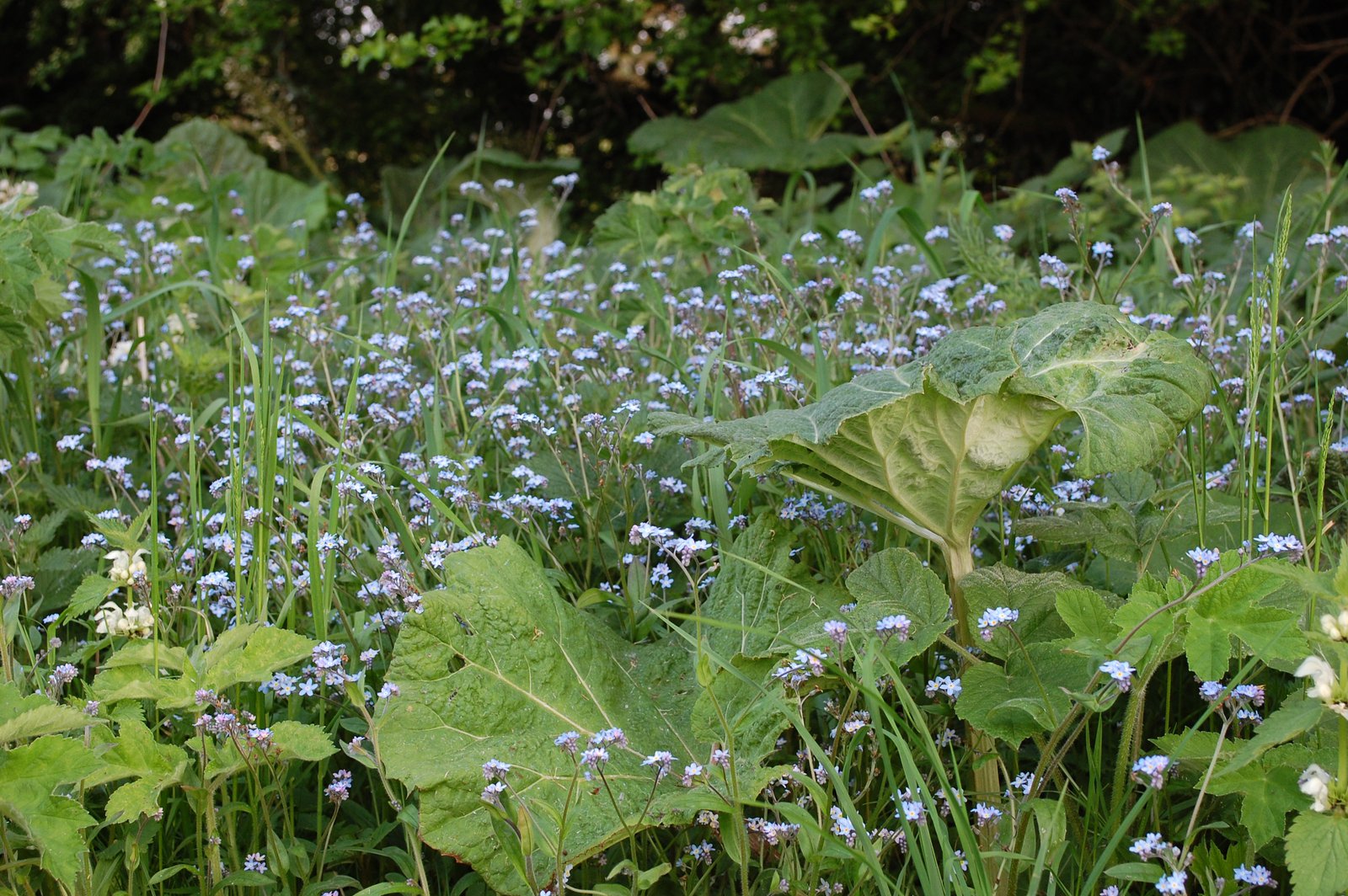 As I got to the point that the Rivers Ure and Skell meet, I walked through nettles and elder, climbed over an ineffectual fence and clambered down the riverbank and stood over the river on the trunk of an elder tree and took a picture of the confluence.  It was probably not worth the effort as it was decidely undramatic, but it was something I had been keen to do, and it satisfied a curiosity.  I still need to find the meeting places of the Ure with the Ouse Beck and also Kex Beck with the River Laver, having found the meeting between the Rivers Skell and Laver earlier. 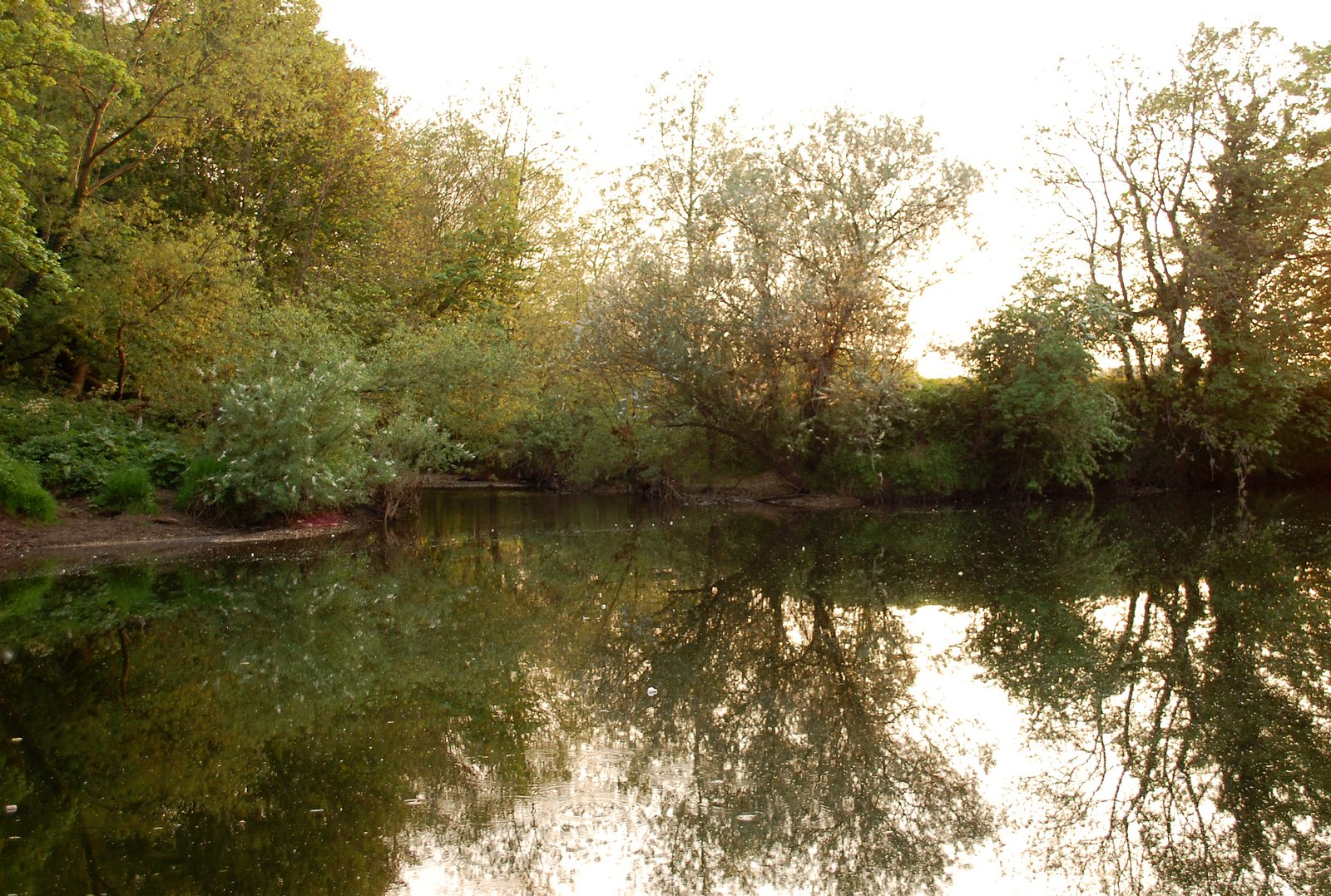 Near here it is worth looking east towards the Blackamoor Pub and looking over the perfectly landscaped farmland and the patches of Van Goghian yellow of rapeseed flowers, then to the north a derelict farmhouse that I will explore another day. 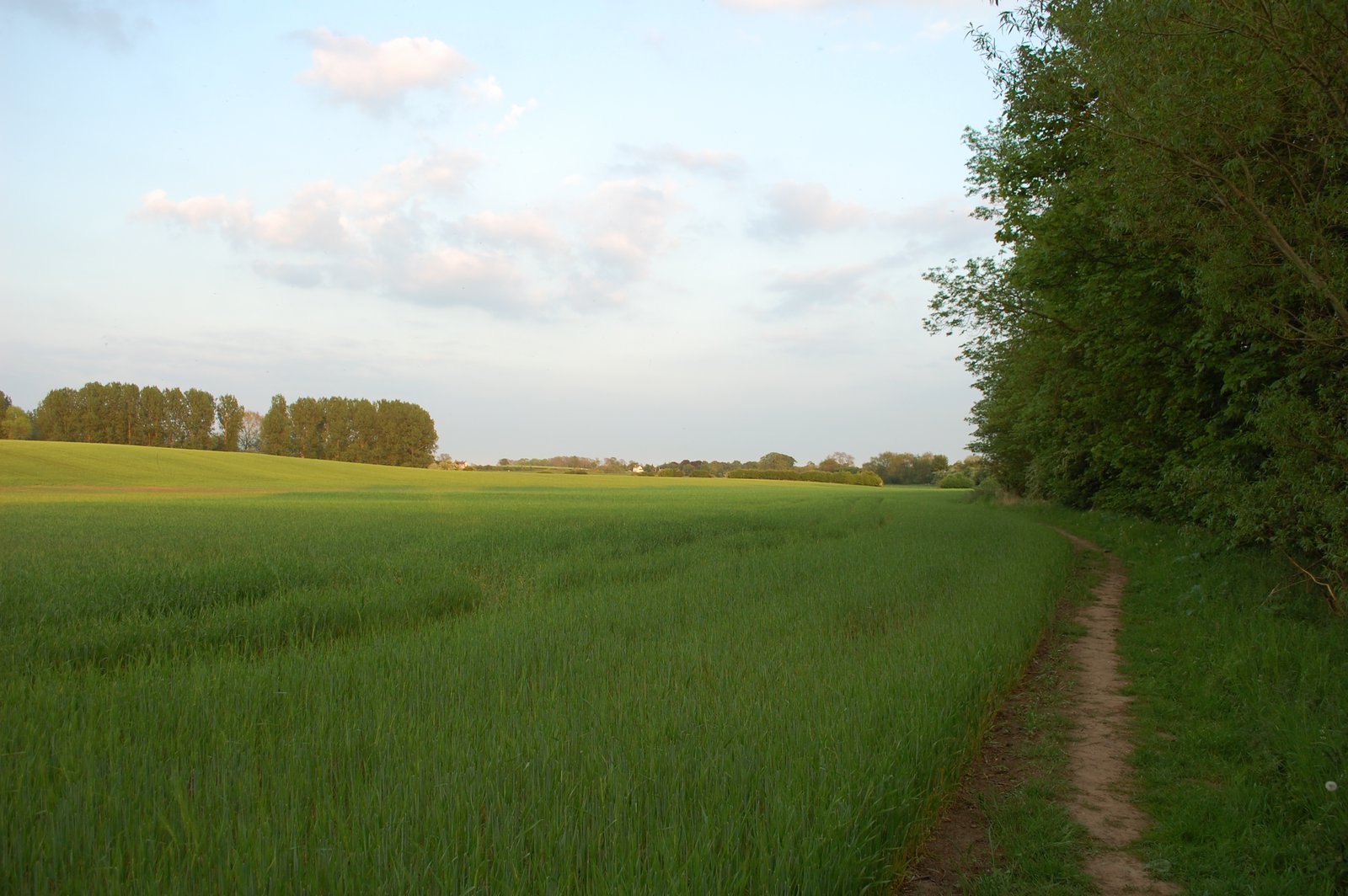 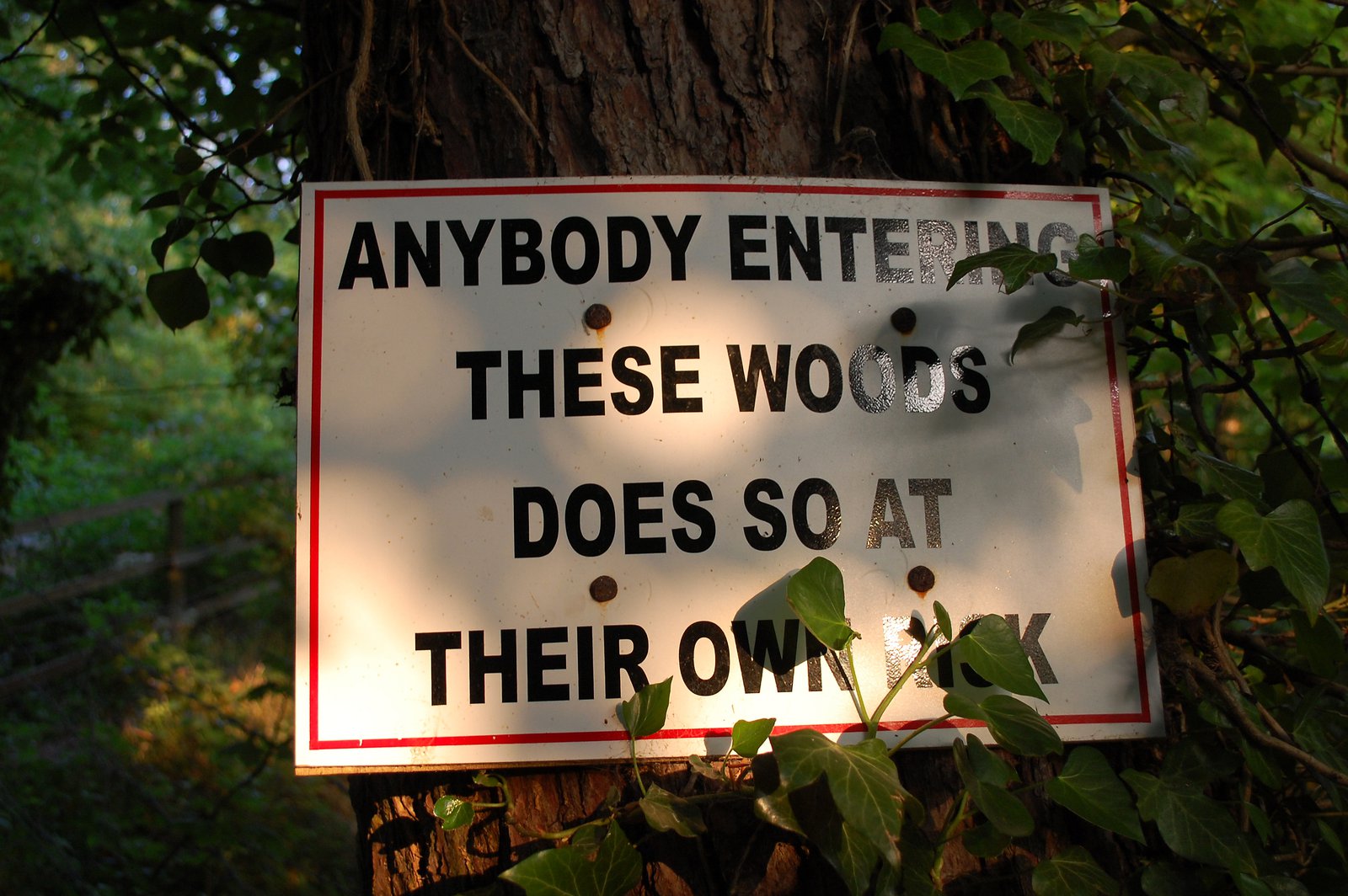 Two-thirds of the way along, you follow a pathway off the river bank and upwards onto Bell Bank, which is a National Trust owned wood that's about 30 metres above the Ure.  It's a steep slope upwards covered in trees clinging to the riverbank, so there's an out-of-place sign warning those who enter the wood that they do so at their own risk - what of: witches or the gruffalo or that I might not notice the steep slope down to the river.  The wood was shaded and dappled with the setting sun and with patches of bluebells here and there, adding a colour contrast to the greens and browns of the woodland.

As you come out of the wood, you get a good glimpse of Ripon Cathedral staring at you, then you are down and nearly out at Sharrow.  As you follow the path along, you go under the Duchess of Kent Bridge, then out and over North Bridge.  Cross over to the opposite side of the bridge and look over the floodplain at one of Ripon's curiosities - a white wigwam, why?  And you're back at Magdalen's Road. 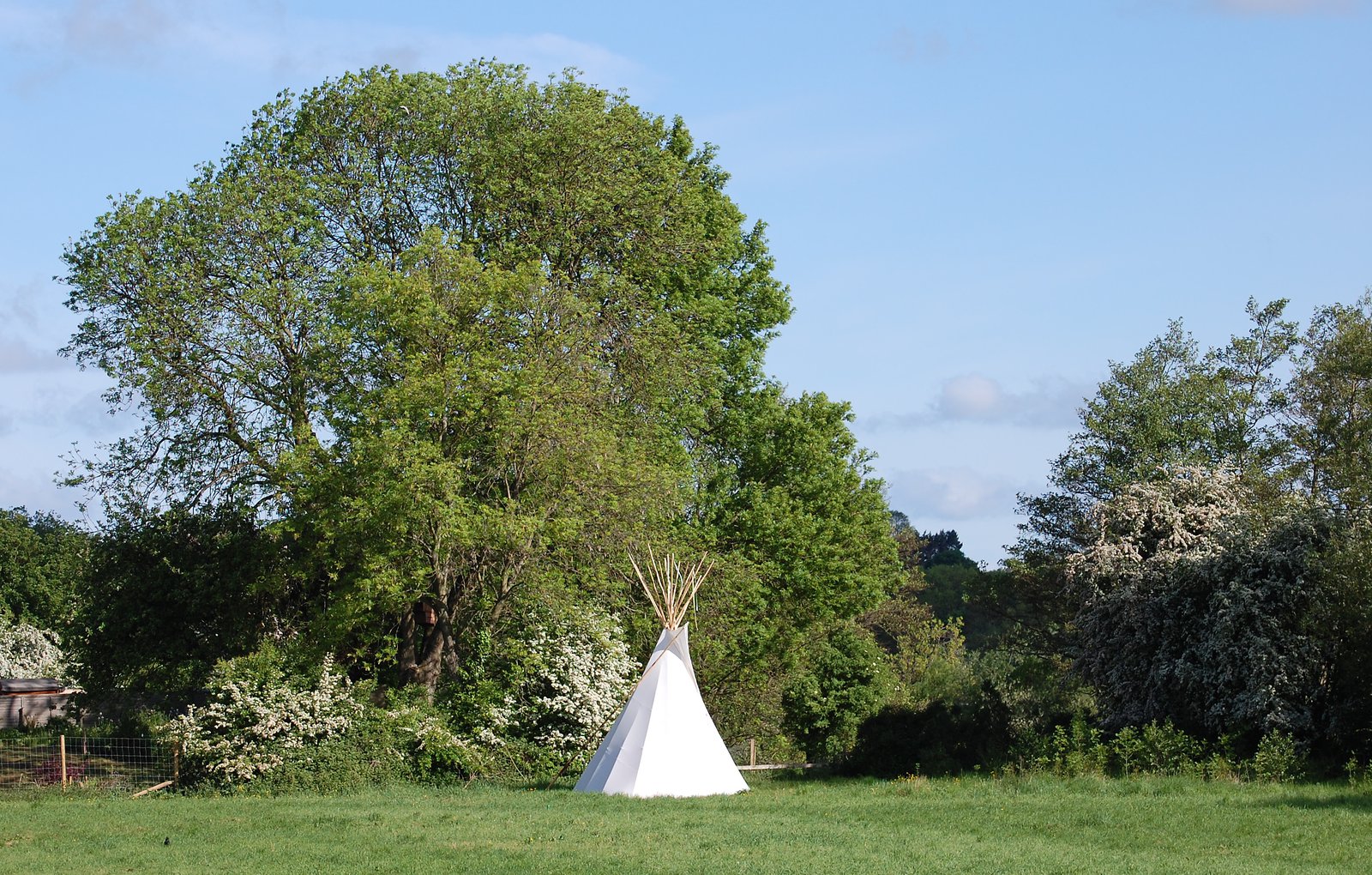 Thinking about it, do you know what I hardly have seen when I do these short potters - people fishing.  Only once have I seen someone and that was in the centre of Ripon, but few people seem to be sitting on the bank, idling their time away trying to catch brown trout or whatever is in the river.  I know there are fishers out there, but where are they hiding?

PS: I must get a filter for my camera as I regularly get the blue sky whiting out in the photos I am taking.