Ripon is blessed with lots of fabulous waterways and green corridors through the city.  One of the most noticeable is Ripon Canal, which cuts a straight caesura into the centre of the city, with the canal sitting on your left as you come in along Boroughbridge Road and onto Bondgate Green right up to Ripon Canal Head.  Like everything about Ripon, it's on a small scale (only 2.3 miles), beautifully formed and has become forgotten by time, having closed down in 1906 and later reopened for leisure boating and recreation in 1996.  I love it. 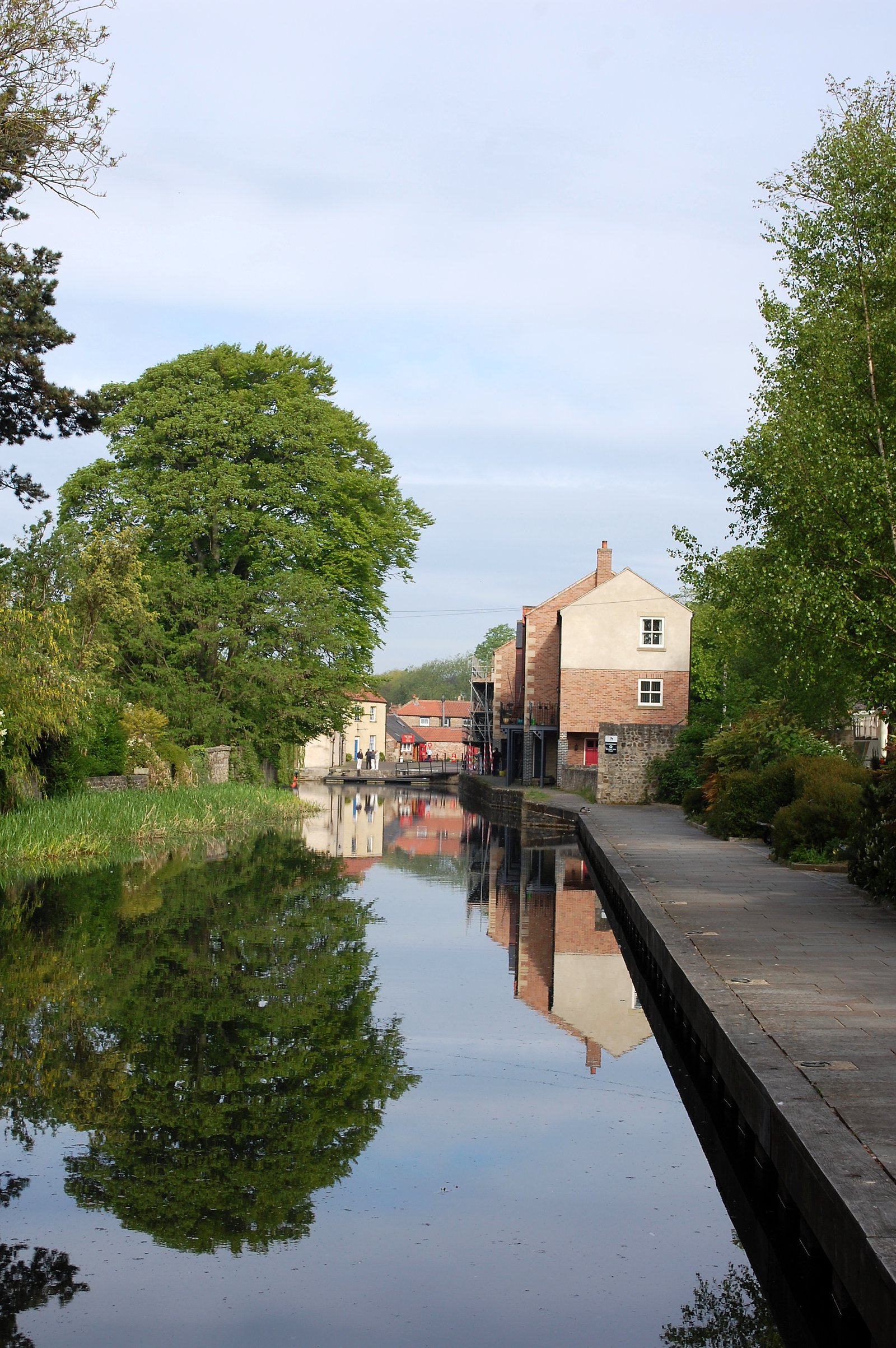 So following on from my last walk along the River Ure, I have spent some time putting together some thoughts on walking along Ripon Canal, together with some photos.

The concept behind the canal is simple: the River Ure becomes difficult to navigate on stretches upstream of Boroughbridge, so the building of the canal and other small sections of canal along the Ure made it possible for boats to pass from Hull and York to Ripon, especially with core industrial products like coal into Ripon from the Yorkshire coalfields and back the other way lead and other products.

A quick history of the canal is as follows: it was authorised to be built by an Act of Parliament in 1767, with construction work being completed in 1773, but it fell into a rapid decline from 1844 when the Leeds and Thirsk Railway Company opened successful negotiations to buy Ripon Canal.  Leeds and Thirsk Railway became part of the North Eastern Railway in 1854 and the Canal was left to decline; by 1892, no traffic was going along the Canal and the railway companies tried to abandon it, then to offload it on the Corporation of York.  When all other canals were nationalised in 1948, Ripon Canal was excluded and was officially abandoned in 1956.  From 1961 until 1996, private boat-owners restored the canal for recreational boating and it now is actively used by enthusiasts.

I start this walk usually by parking outside of Wolseley Center on Bondgate Green, then cross over the road and walk back down towards Ripon Canal Head before turning around and doing the walk properly.  Ripon Canal Head has been renovated and includes some compact canal view houses, a farm shop and an embroidery and craft shop called Barnyarns, as well as a renovated warehouse.  There were four boats moored just beyond Ripon Canal Head and I briefly chatted to a gentleman who was enjoying a glass of red wine and reading a book beside his narrow boat - the Moorhen - and discovered he was based in Retford in Nottinghamshire and spent much of his time travelling the canal network.  It is a short gentle walk to the first lock beneath lovely lime trees, with a few industrial buildings on the left - such as Ripon Builders Merchants and Wolseley Center - and just before the bridge you might get the curious dry, yeasty smell of bread wafting across the canal from Ripon Select Foods on Dallamires Lane, which is one of England's main manufacturers of breadcrumbs for the food industry.  It is reminiscent of the damper, beery yeasty smell of Edinburgh, which was one of the first memories I had when at university there back in the 1980s.

You amble under the dark, gloomy concrete bridge into the outskirts of Ripon, with Fisher Green on your left.  The canal bank here is covered in grasses and beflowered with meadow buttercups, white and pink wild roses and white ox-eye daisies and everywhere you look there are ducks and ducklings gliding busily along the waterway.  On your right, there's a quaint wooden bridge, painted white and black, that leads onto Dallamires Lane and down to one of the mooring points where you will sometimes see a long boat with the name, Belly Button, that has got a pub-sign-style painting on the side of a man carrying his large beer belly along in a wheelbarrow.  Today, it was empty save for drake resting his weary head on the concrete. 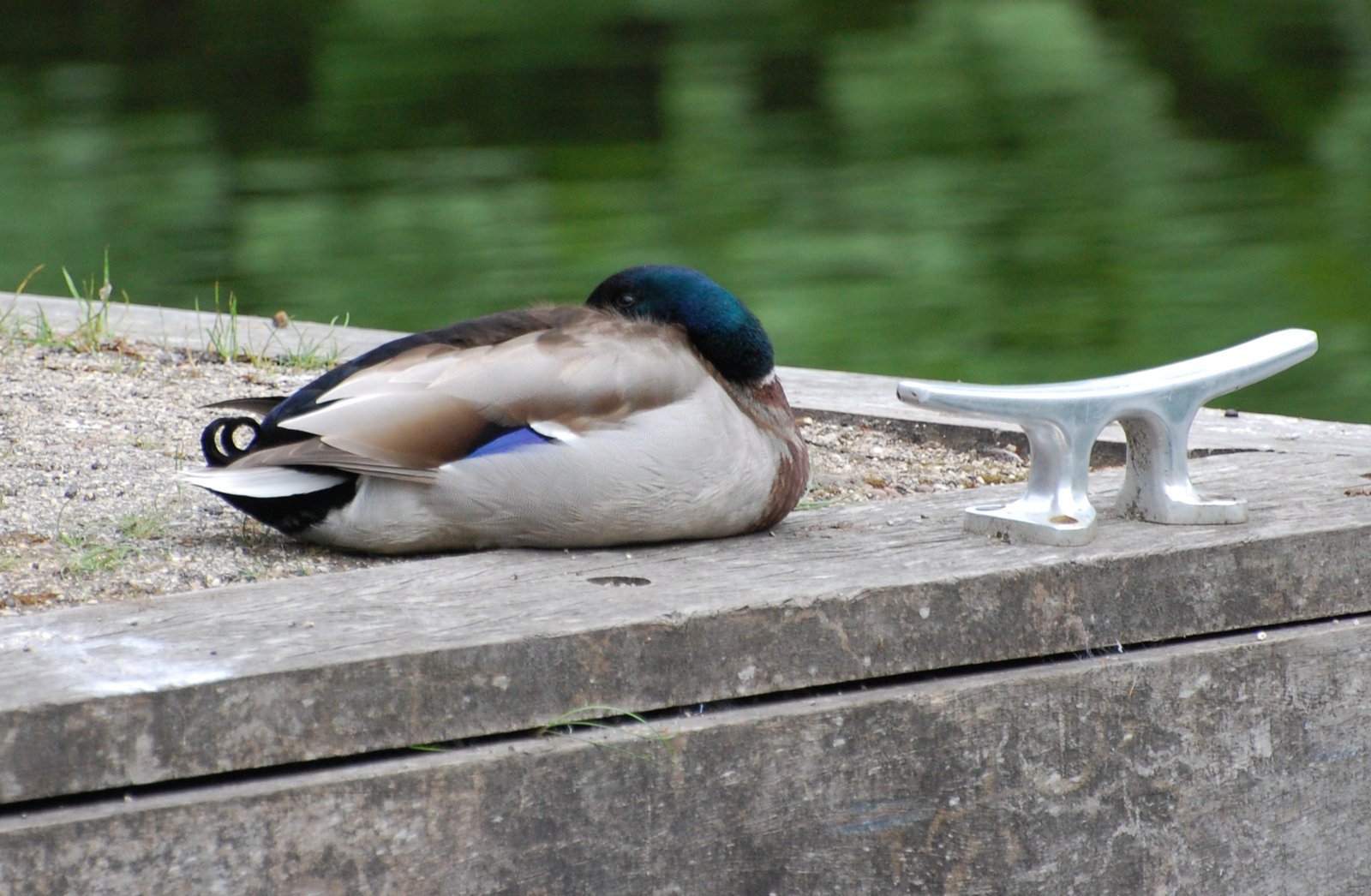 Just before the first lock - Rhodesfield Lock - there is the pretty whitewashed former lock-keeper's house and then you angle down about 3 to 4 metres to the new level alongside a caravan park and berths for narrow boats.  At Rhodesfield Dock, a local boat, the Graceland, had just completed coming up the lock system and the owner was pushing her off the side and was taking her to dock by the wooden canal bridge.  On the right, you can see sometimes see the blue-painted narrow-boat Söll, which has a row of beautiful carved birds on its roof; I don't know whether it is its Germanic name or the wooden birds on top, but it reminds me of Bornholm and its eider ducks (I know Bornholm is not Germanic but Danish-Swedish, but that's the way my thoughts erroneously wandered). 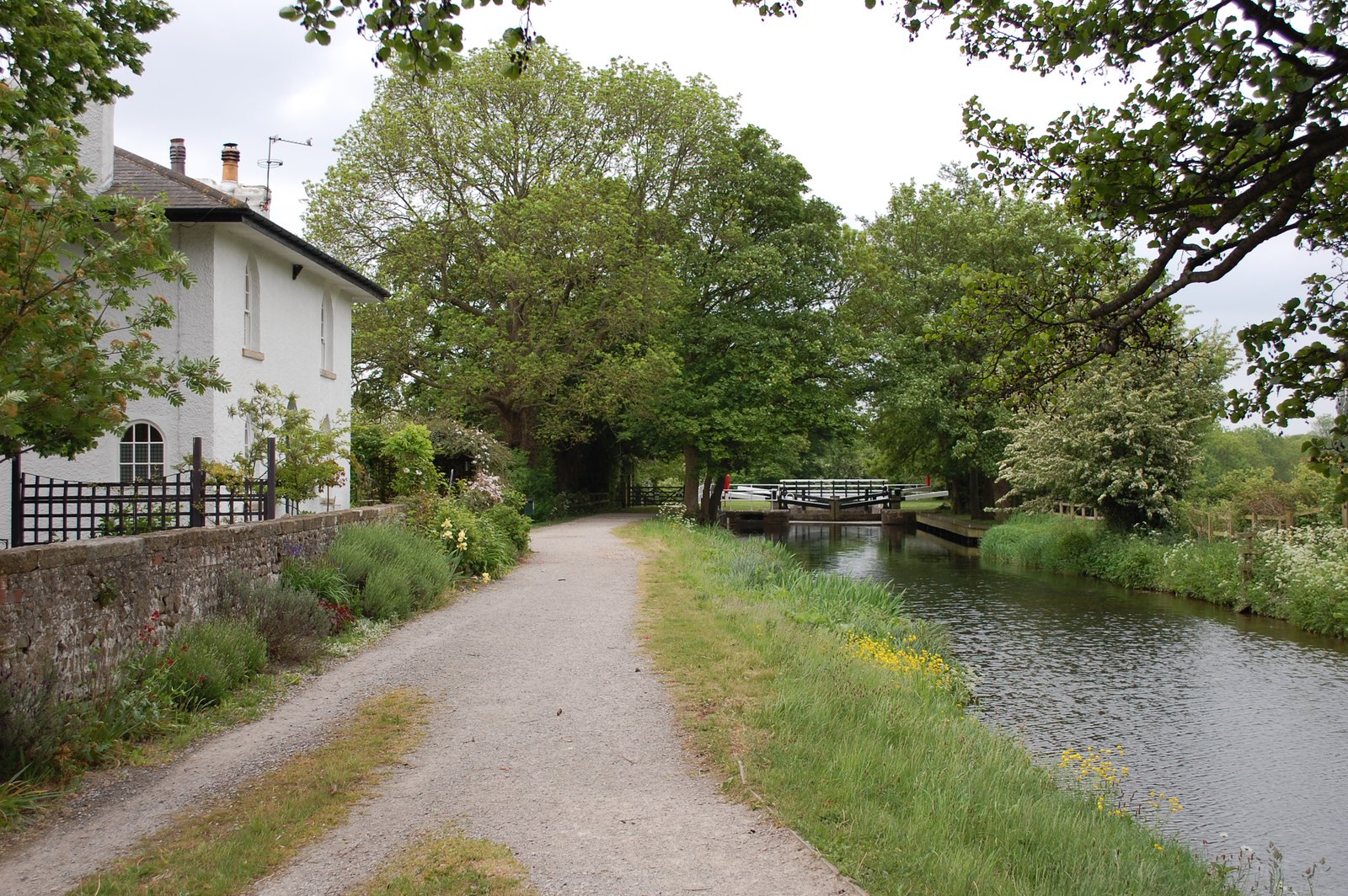 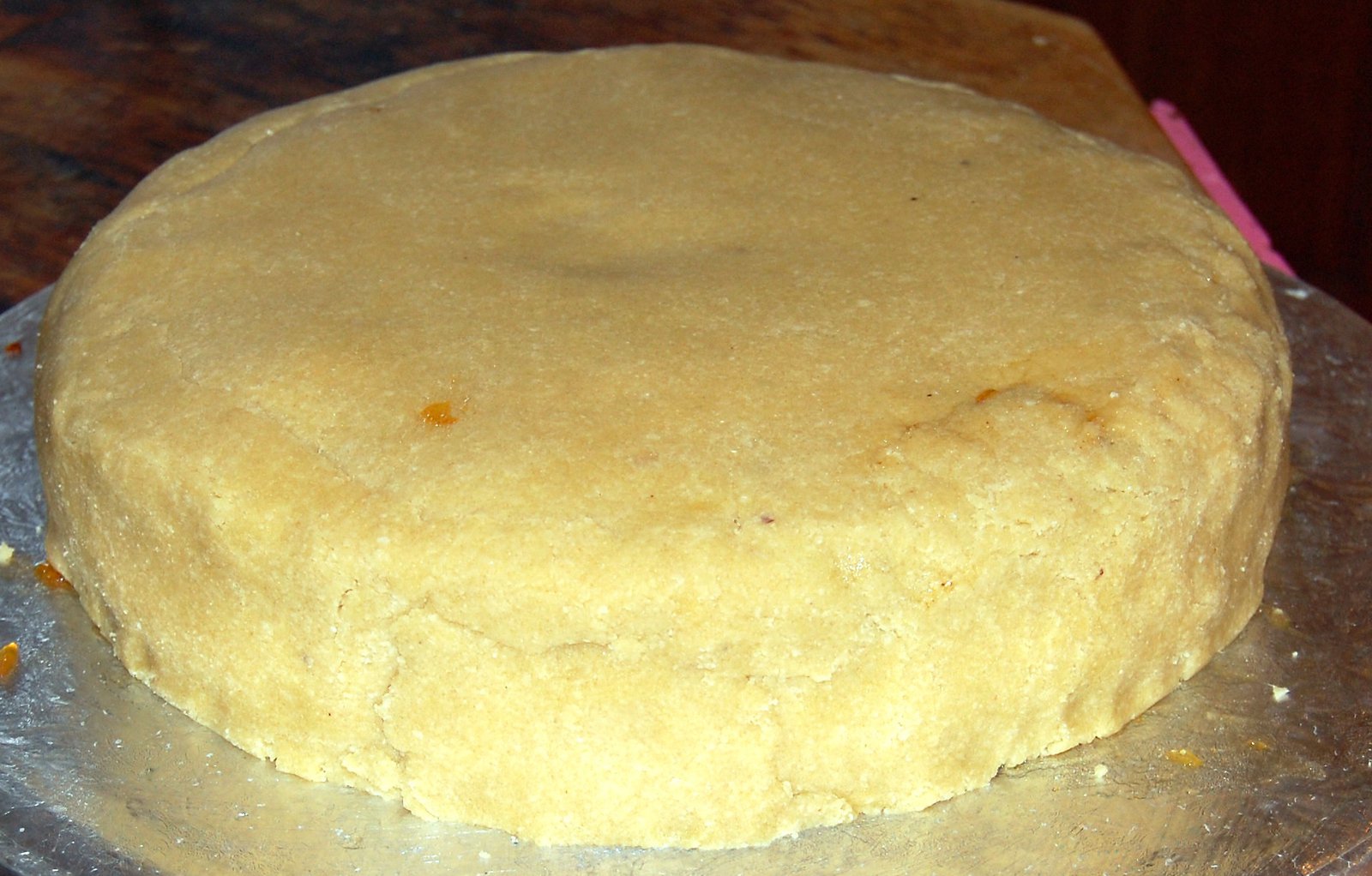 We now walk from Rhodesfield Lock to Bell Furrows Lock, which is beside Smeaton's Marina, named after one of the engineers who built Ripon Canal.  You can cross over Bell Furrows Lock to the other side, giving you a decent view back along the route you have travelled so far.  A common frog scuttled across the path. 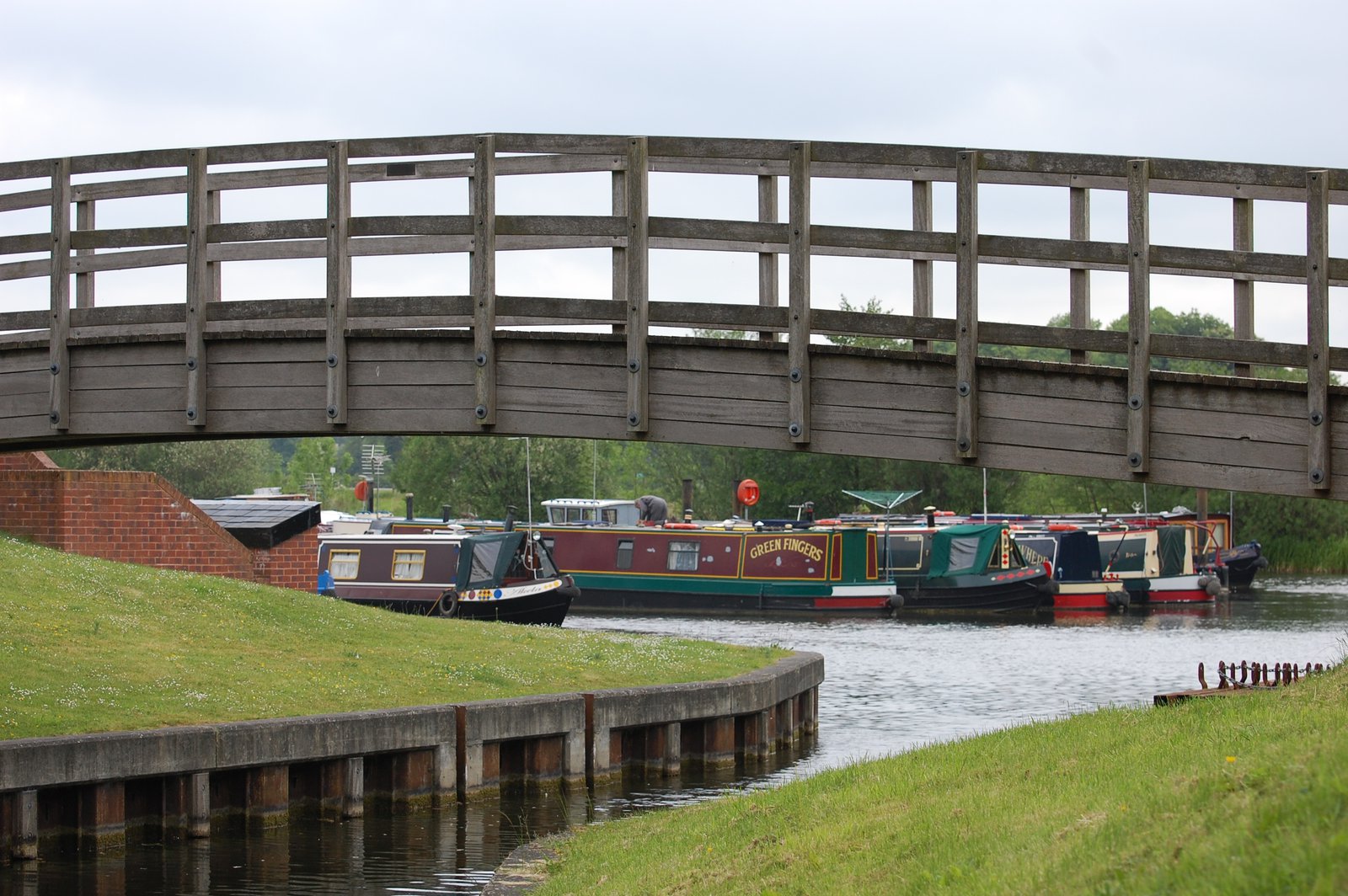 From Bell Furrows Lock, it's a half mile walk to Nicholson's Bridge and Ripon Motor Boat Marina.  On your left, you have a bird sanctuary beside Ripon Race Course; it is a wetland that has been restored from gravel pits, forming part of a larger wetland area along the River Ure and all the way down to the Humber Estuary.  On the other bank, there are some fields and the well manicured ends of some of the posher residences at the edge of Ripon, while the trees have changed to a mix of sycamores and elder.  I couldn't see much of interest the other day except a few swans and tufted ducks, while I raised a grey heron that had been calmly fishing in the canal and languidly started its laboured flight off the canal onto the wetlands, with its strange cricked neck folding back on itself.  By Nicholson's Bridge, you have the edge of Ripon Race Course to your left and the edge of Ripon to your right and move on to cut through farmland to the meeting of the Canal and the River Ure about one and a half miles further on. 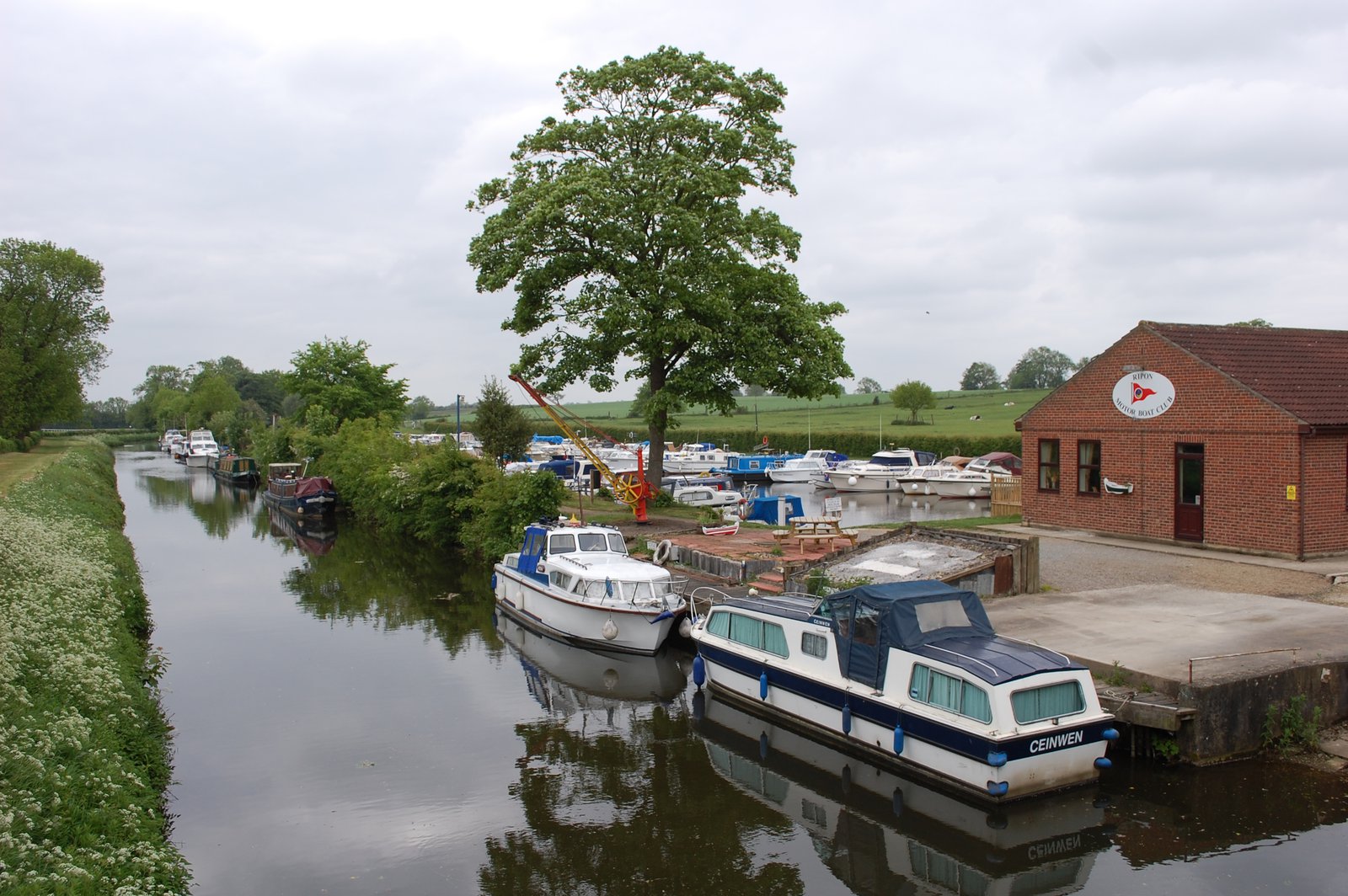 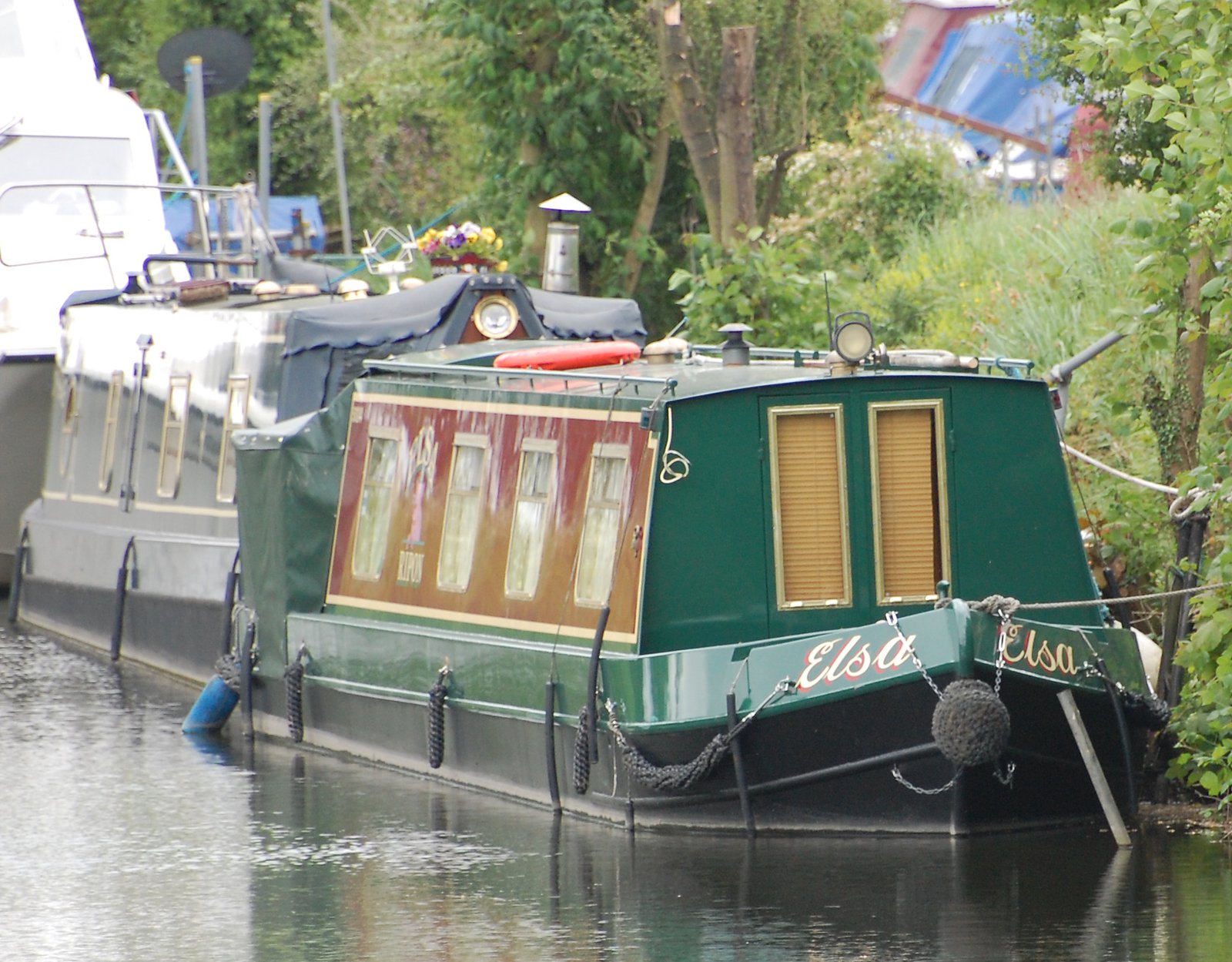 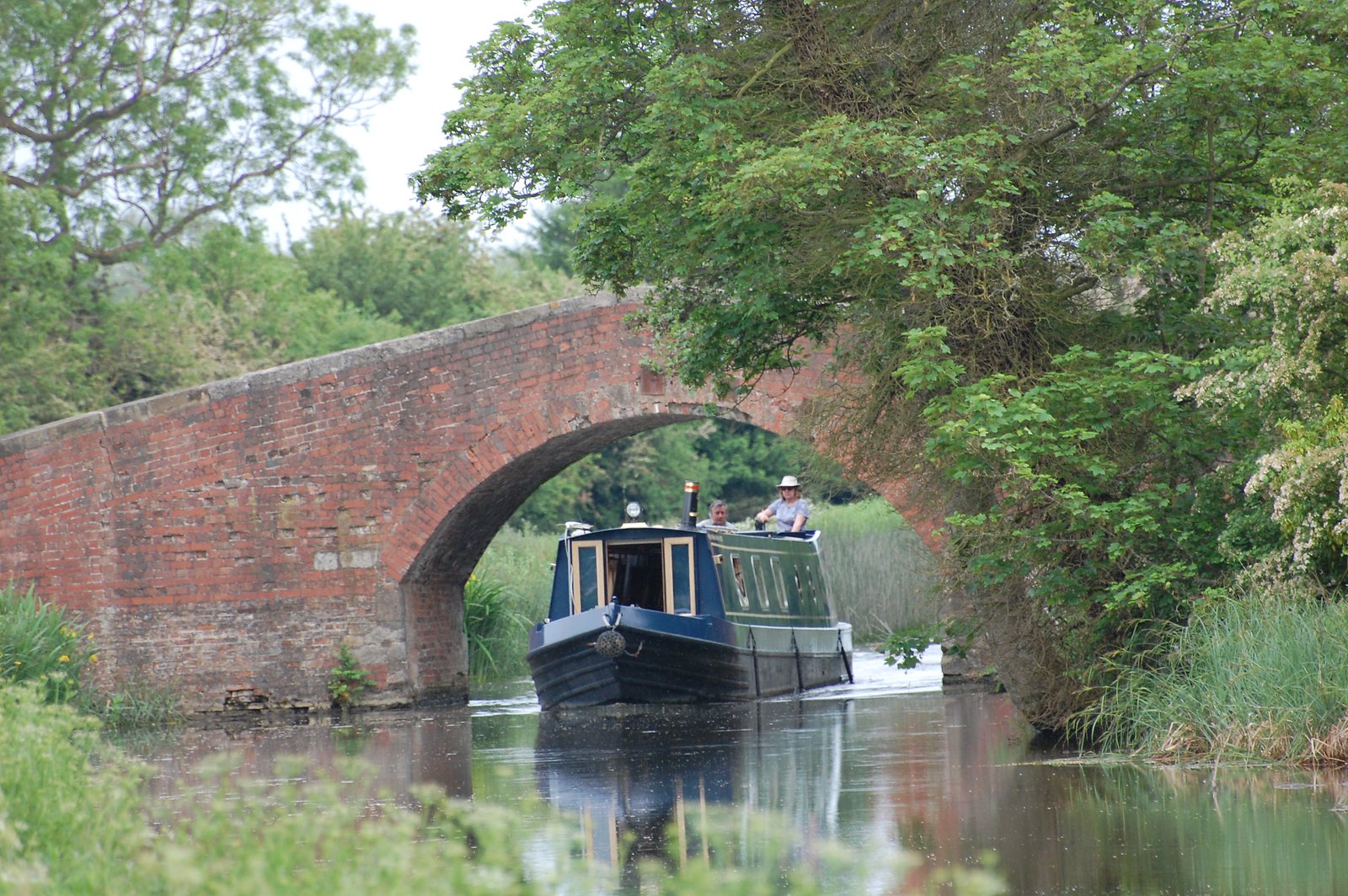 From Nicholson's Bridge to Ox Close Lock the walk opens out and you have Ripon Race Course to your left and then farmland on the right bank.  On Saturday evenings in the summer, there is loads of activity around the marina and up and down the canal.  Everyone is full of spirits and cameraderie, while proud narrow boat owners are bringing their boats in to a resting place for the night.  Boat names are an art in themselves, while the colours of the boats' painting are glorious and the flamboyance of the pots of flowering plants atop the boats is full of gaudy joy.  The air is suffused with the smells of hedgerow flowers interspersed with the smoke from charcoal burning in barbecues. 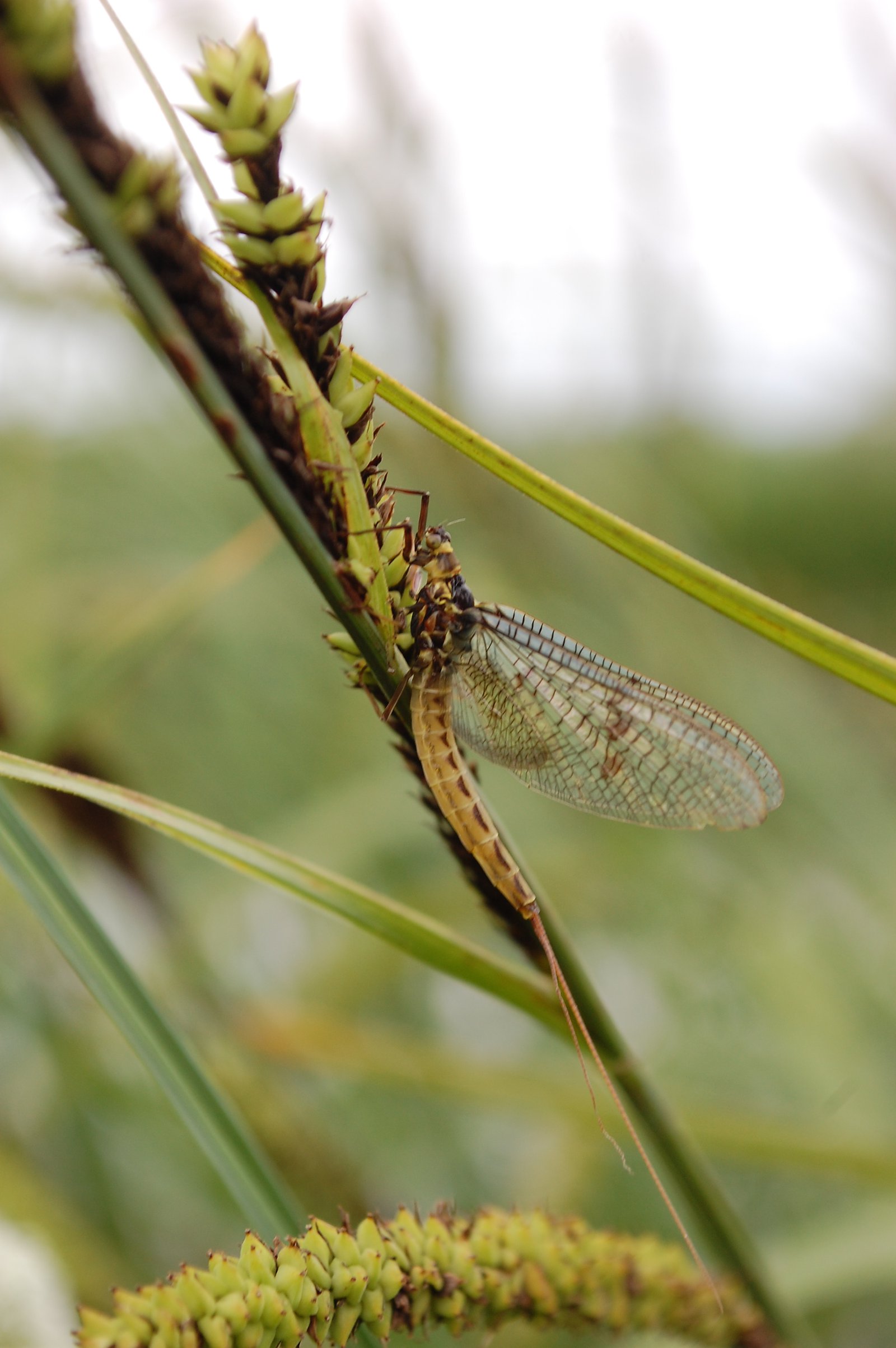 After you pass one of the starting points at Ripon Race Course, you seem to be walking along a wide garden path.  On the opposite bank, cows come down to the water's edge for an evening drink.  At Renton's Bridge, I crossed to the other side to the sound of several joyous song thrushes with their evening choral mash-up.  Mayflies were flying around, bobbing up and down in a weird dance.  At Ox Close Lock, there were quite a few boats hunkered up for the evening, with several more including the Rivendell coming into the canal system off the River Ure.  I walked beyond the canal to a lone oak tree and rested for a while, looking at Newby Hall a short distance to the west and back towards the small hidden opening of Ripon Canal. 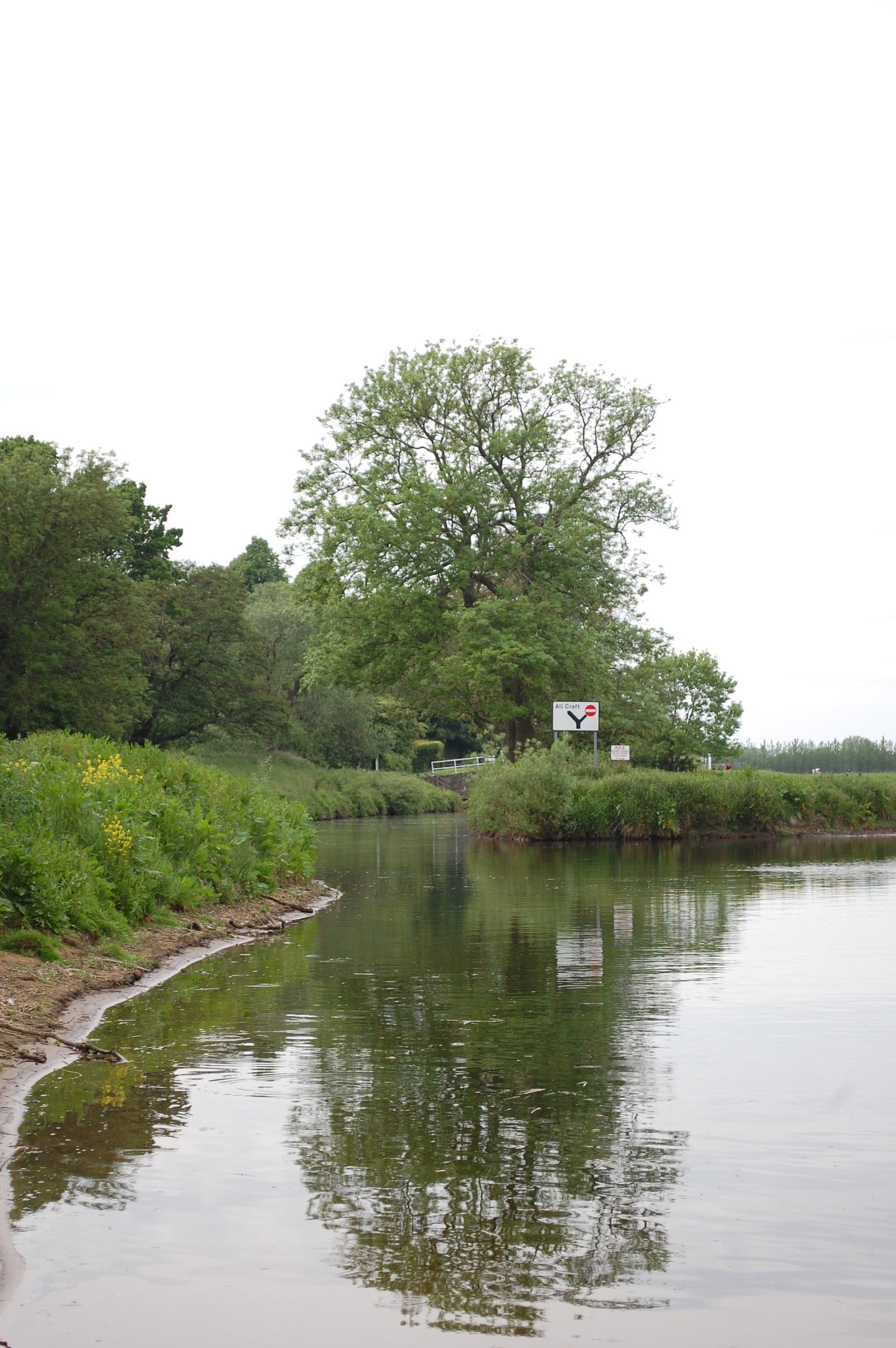 I pondered on why so many people were on boats and in caravans, constantly moving around and why we all felt the need to escape rather than to enjoy the here and now of where we live.  I realised that it's because we are so disconnected from reality and the natural world in the artificial edifice that mankind has built and calls "life", so that we need to reconnect with the natural world, rediscover where north is and listen to the music of the nature.  It's mankind's fictional "life" that is wrong, and in the end irrelevant, and whenever people realise that deep down, they must rediscover reality for themselves, somewhere, somehow and they need to go on a journey, and that journey is personal and the solution is unique for each individual or family and is beautiful and right whatever the solution they arrive at for restoring their own inner harmony.