During the autumn months of September and October 2015, I've been reading my usual eclectic mix but also trying to read some of the books that have been on my chest of drawers for a while. Look forward to hearing if you've enjoyed or hated any of them and what you enjoy reading. They are in no particular order. Looking at them I seem to have been reading quite a lot of the Man Booker Prize shortlist for 2014, this wasn't my intention, but last year lots of them really appealed to me (although it may have taken me a while to get round to them), which isn't always the case. 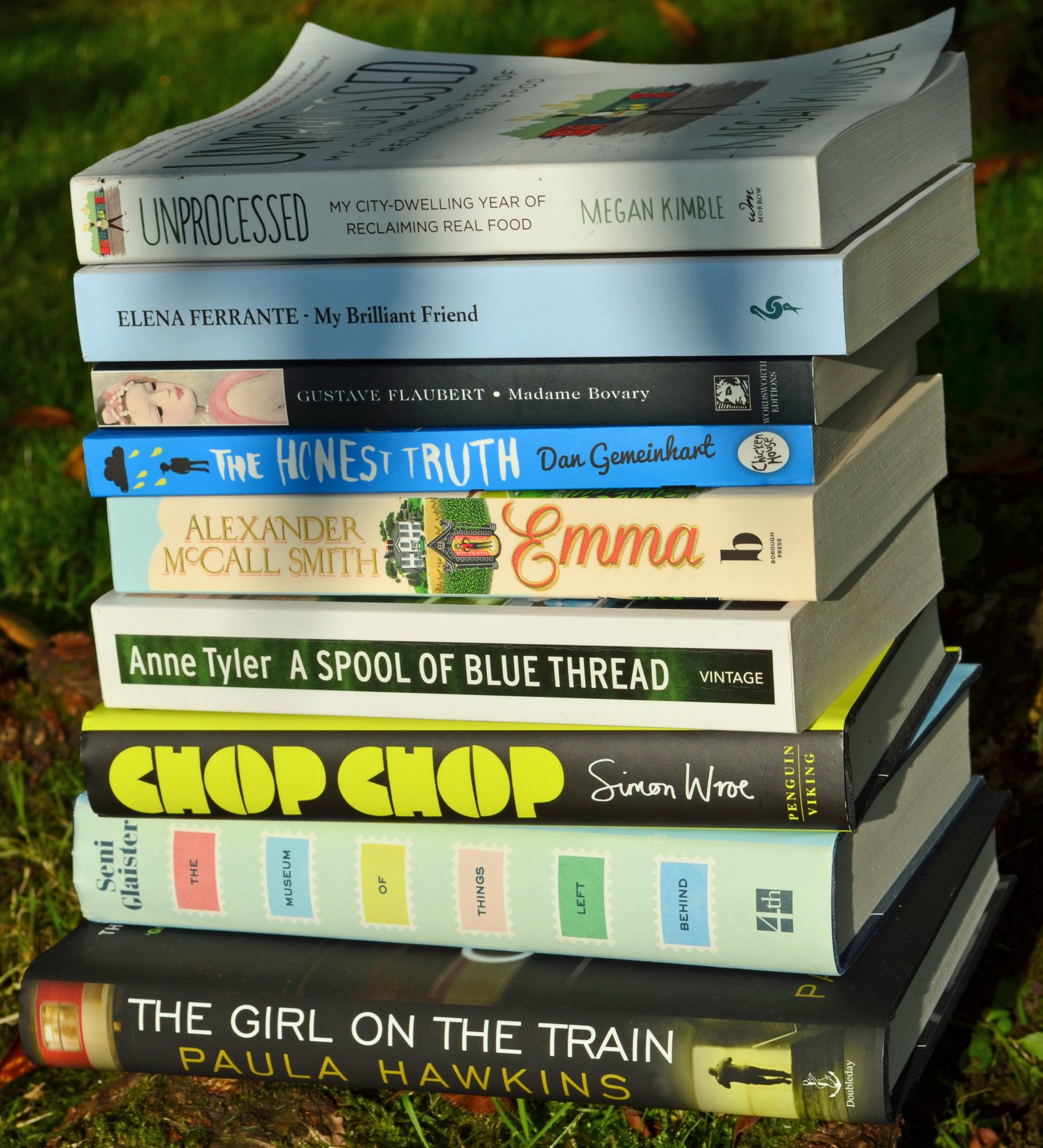 Some of the books Sophie has read this autumn.

My Brilliant Friend - Elena Ferrante (the first in the Neaopolitan novels) Loved this first novel of friendship, look forward to reading the rest. Waterstones and my local independent bookshop - the Little Ripon Bookshop have been very pro this series but read a great review of the last in the series of 4, when it was published earlier in the year.

Unprocessed - Megan Kimble (one person's determination to live for a year eating unprocessed food, from making her own bread to working out what was possible)

On the Black Hill - Howard's End is on the Landing A year of reading. I hadn't read any Bruce Chatwin since his amazing book Songlines, but I did enjoy this book on Welsh rural life)

Us - by David Nicholls, author of One Day - empty nesters rediscovering themselves - much preferred this book to One Day, partly because I liked the characters more. Long listed for the Man Booker prize 2014.

The Museum of Things Left Behind - Seni Glaister - a charming book about a fictional european country that grows tea and how development is not all about big things, often it can be about collaboration and working together.

Chop Chop by Simon Wroe - restaurant hell but genuine love of what they do. Short listed for the Costa First Novel Award 2014.

A spool of Blue Thread - Anne Tyler (shortlisted for the Man Booker Prize 2015 - the October book for the Little Ripon Bookshop book club) family secrets and dynamics. Hadn't read any Anne Tyler for decades so was delighted to read her again and enjoy it.

Emma - Alexander McCall Smith (the modern retelling of Jane Austen's classic, part of the Austen Project) Emma is not my favourite Austen novel but i enjoyed this retelling

The Honest Trust - by Dan Gemeinhart - a teen book recommended by my daughter about a boy's determination to complete a project, even when he's terminally ill

Why we took the car - Wolfgang Herrndorf, another teen book about an illicit road trip in Europe. A coming of age book.

Madame Bovary - Flaubert (went to the lovely Ripon Curzon cinema and saw a trailer for the new film Gemma Bovary - realised I had never read the original, although it was beside my bed - so thought now was the time. A tail of woe where no one ends up happy)

The Narrow Road to the Deep North - Richard Flanagan - winner of the 2014 Man Booker Prize for Fiction. Not for the faint hearted and definitely had to be in a strong mood to read this book about the Burma Railway in World War II. Very glad to have read it though.

Dark Endeavour by Kenneth Opel - a prequel to Mary Shelley's Frankinstein aimed at the teen market. Read it after our daughter had finished it to see what themes have come up. Not even sure though that I've read Mary Shelley's book. Another one for the ever increasing pile.

The Seven Sisters by Lucinda Riley. This book covers the eldest of at least 6 adopted daughters discovering her origins. A great read. 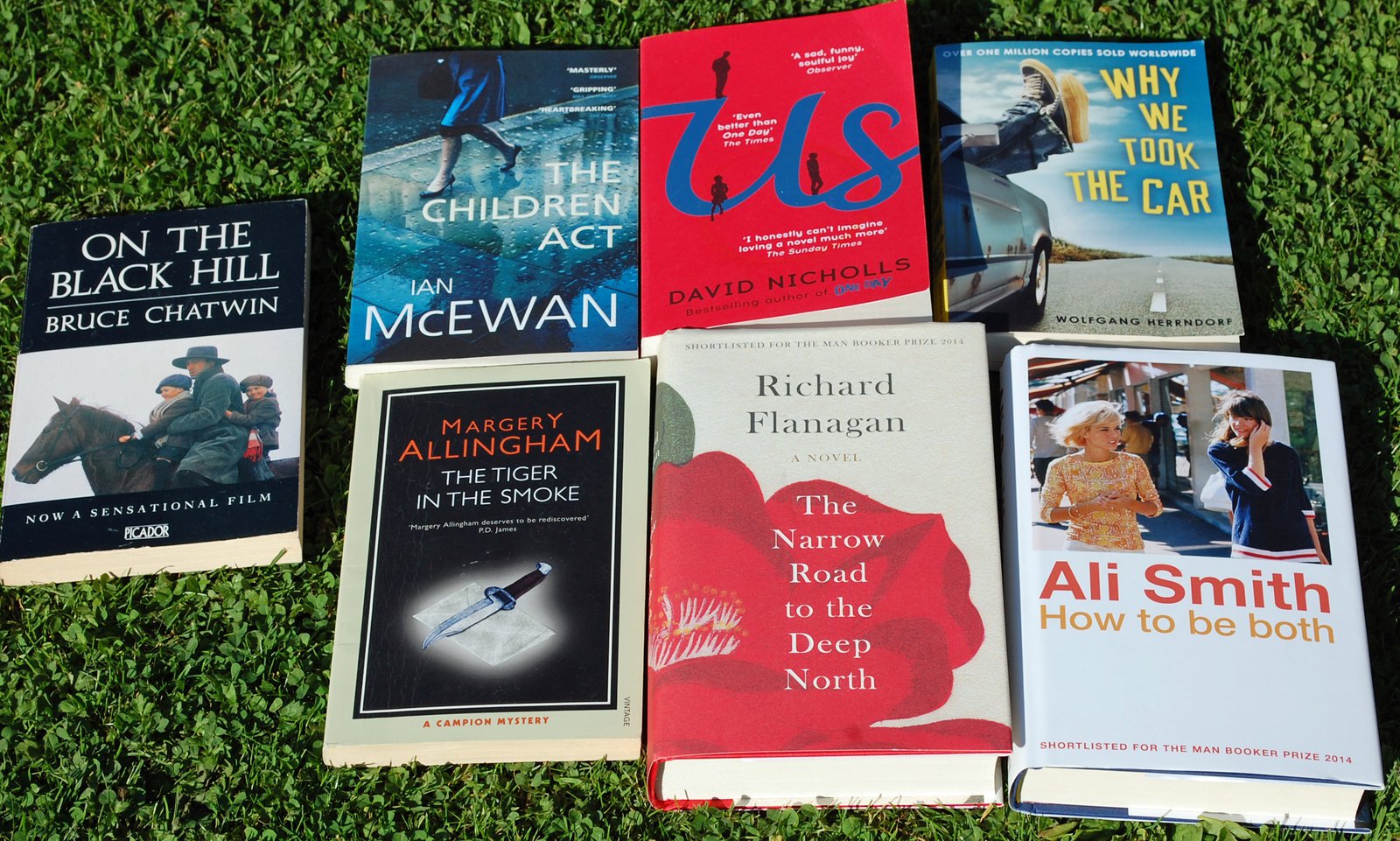