Recipe: Potatoes Dauphinoise With Long Pepper and Grains of Paradise

With the nights drawing in and the leaves turning a rusty orange colour, I had promised Sophie that I would make Potatoes Dauphinoise, one of her favourites.  This is a tasty, homely dish that is full of the richness from the cream and milk.  I prefer a Maris Piper potato for this, as well as for roasting potatoes in general, so I have used them here.  You can use any potato as long as it does not get too floury and collapse.

For seasoning, I used the classic garlic and onions, but instead of simply pepper and salt, I have gone more exotic and used Indonesian long pepper and Ghanaian grains of paradise, plus some nutmeg.  These are all old, classic spices, but the long pepper and grains of paradise are certainly much less used these days.  Then I sprinkled over some delicious, bright red paprika from Murcia as a final garnish.

Potatoes Dauphinoise is delicious with almost any main course, but I think it goes better with meats than fish, because of its richness. 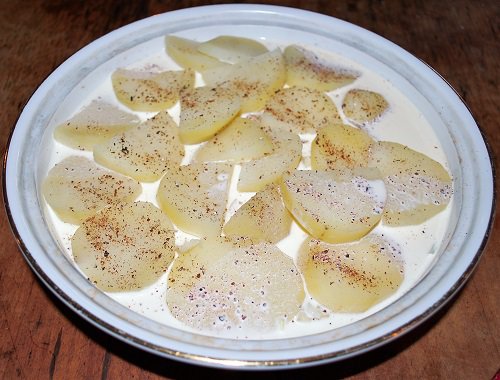 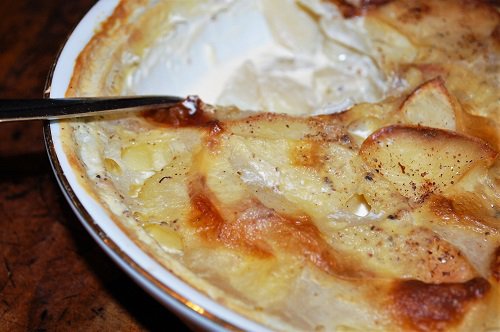 Potatoes Dauphinoise With Steenbergs Long Pepper And Grains Of Paradise

Recipe for Potatoes Dauphinoise with Long Pepper and Grains of Paradise

2. Peel and slice the potatoes thinly, then parboil for about 4 minutes, then drain.

3. While the potatoes are boiling, butter a large ovenproof dish.

4.  In a pestle and mortar, crush the long pepper and grains of paradise until quite fine.  Mix in the nutmeg powder and a pinch of sea salt.  Crush again lightly to break down the salt crystals.

5.  Arrange a layer of the potatoes in the ovenproof dish, then sprinkle over some of the onions and garlic.  Next season with some of the spices mix.

6.  Place a layer of potatoes over the garlic-onions-seasoning.  Repeat the sprinkling over of onions and garlic, then season.

7.  Alternate such that you end with a layer of potatoes.

8.  Mix the milk and cream and pour over the potatoes.  If you need to add some more liquid, simply add  little more milk.  Cover with foil.

9.  Bake in the oven for 45 minutes, then remove the foil and bake for another 30 minutes until golden brown.

10. Sprinkle with the paprika before serving.