Steenbergs Grains Of Paradise are a type of cardamom that was used for many years as a pepper substitute - isn't the name just plain mysterious and delicious sounding, but these little beauties will not change your consciousness but can zazz up your... 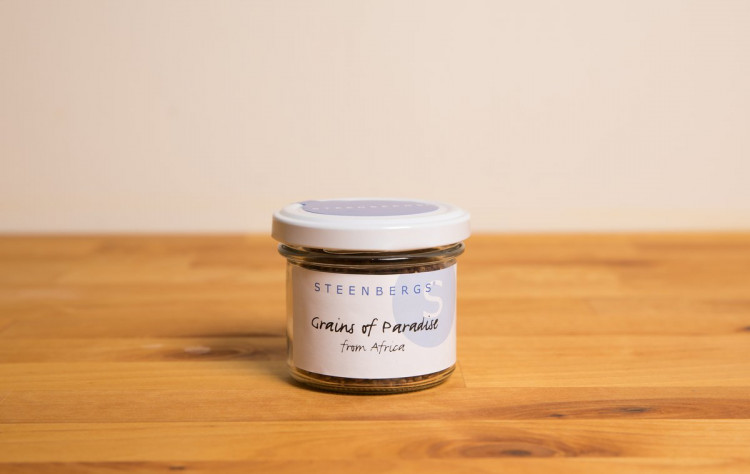 Steenbergs Grains Of Paradise are a type of cardamom that was used for many years as a pepper substitute - isn't the name just plain mysterious and delicious sounding, but these little beauties will not change your consciousness but can zazz up your recipes.  Grains of paradise are indigenous to the West Coast of Africa from Sierra Leone to Angola. Grains of Paradise are sometimes called Melegueta Pepper which refers back to an old empire - Melle - inhabited by the Mandingos in the upper Niger region between Mauritania and Sudan. Although called pepper and used as a pepper substitute in the Middle Ages, grains of paradise are actually a member of the ginger and cardamom family. The seeds of grains of paradise are brown, small seeds that are 2mm in diameter. The taste of grains of paradise is initially piney then peppery, hot, biting and numbing. Similarly, a lingering camphor flavour with notes of turpentine can be detected. They are rare in European cooking nowadays, but grains of paradise are used to spice beer especially in traditional Belgian beers and Axel Steenberg has incorporated into the North African qalat daqqa spice mix.

Grains of paradise are the seeds from a plant of the cardamom family, Amomum melegueta or Aframomum amomum, and are native of the west coast of Africa from Sierra Leone to Angola.  Grains of paradise are leafy-stemmed shrubs that grow from a rhizome much like ginger.  Like cardamom plants, the flamboyant pink flowers grow on small stems (5cm or 2 inches long) that emerge at ground level.  Later, fig-shaped, 10cm long (4 inches) fruits that are red to orange in colour develop.  These pods - like cardamom pods - contain small seeds which are roundish brown seeds, which are 2mm (1/8 inch) in diameter.  These small seeds are grains of paradise, which are also known as melegueta pepper, ginny grains or Guinea grains.  Grains of paradise are aromatic with hints of cardamom, while their flavour is resinous with hints of pine and camphor, followed by a hot, biting peppery taste.  For more on grains of paradise, try Gernot Katzer's Spice Pages .

Grains of paradise are used in much the same way as pepper and can be used as an alternative to pepper, especially in Tunisian and West African dishes.  Grains of paradise can be found in spice blends like qalat daqqa and sometimes ras al hanout.  For culinary inspiration try Food.com or make a mediaeval mulled wine hippocras .

Steenbergs Grains of Paradise are part of our range of specialist spice ingredients, including a range of chillis, speciality salts and different peppercorns.  For more, browse Steenbergs' website, or call us on 01765 640 088 or email to enquiries@steenbergs.co.uk.

This is the original recipe from Le Viandier de Taillevent in 1375. Alternatively you can use Old Hamlet Hippocras mix!