Recipe For Pears In Rooibos With Vanilla And Saffron

One of the classics of British cuisine is to poach pears in red wine or syrup.  As a variation on this, I sometimes create a sweet spicy syrup to poach the pears in, then reduce these to a thick, sweet sauce.  Recently, however, I have been thinking about how to use teas and infusions in my cooking, as well as the impact of different liquids such as beer versus wine and even different beers, to add extra depth to the flavour of your food without bringing in too much extra complexity.

That's a rather geeky way of saying the liquids you use in cooking can alter subtly the flavour of the meal and they are something we all tend to ignore when cooking, focusing on the big ingredients like the meat or the vegetables or the mix of spices, then just pouring in tap water or "red wine" when we should be screaming hard or soft water, bottled water, fizzy and which red wine, wine from where, as it makes a huge difference.

So as an experiment, I brewed up a large pot of Red Chai Tea, which I make with an organic rooibos tea from South Africa and my own flavour combination of spices.  I left this to steep for a bit then filtered out the sweet, orangey-red tea that is coloured like an amazing African sunset.  Next, you add a mix of ginger powder, saffron and Madagascan vanilla and a light muscovado sugar to the tea; in my usual recipe, I add lemon zest but not here as there is lemongrass in the chai spice mix.  This is the base flavour for the pears and the sweet sauce, which you then use to poach some pears.

At this time of the year, pears are deliciously ripe but you can use this recipe even on the most flavourless brick of a pear in mid winter and get some flavour into them and soften them up, so it is good for your five-a-day.  The result are perfectly soft and succulent sweet pears in a sweet sauce that has a richly luxuriant saffron-vanilla flavour.  Sometimes, I finish my normal versions of this recipe with a vanilla whipped cream, but that really is almost too decadent and I did not have any cream the other night.  Eating with a knife and fork, the knife just glides through the soft flesh of the pear and the taste is heavenly with the characteristic sweetness of the pears perfectly offset by the chocolately, creaminess of the vanilla.

It does take a bit of time to make, but not much effort.  And simple is often the best thing in life.

How To Make Pears In Rooibos With Vanilla And Saffron

4 pears (choose the nicest you can find, but they should still be hard)

Peel the pears leaving the stalk, then cut a small slice off the base of the pear to enable them to stand upright in the pan and on the plate.  Find a heavy bottomed pan that is tall enough to accomodate the full height of the pears with the pan lid over the top.  Leave the pears on a plate to the side for the moment.

In a family sized tea pot, brew the rooibos tea.  It is best to use loose leaf tea as the tea bag imparts a dusty, foisty flavour to the tea, but a teabag will do for convenience.  Brew as normal based on equivalent of 1 teaspoon per person so that is 4 heaped teaspoons into the pot, using freshly drawn water that has been brought to the boil, then steeped for 5 minutes; strain and pour into the pan. 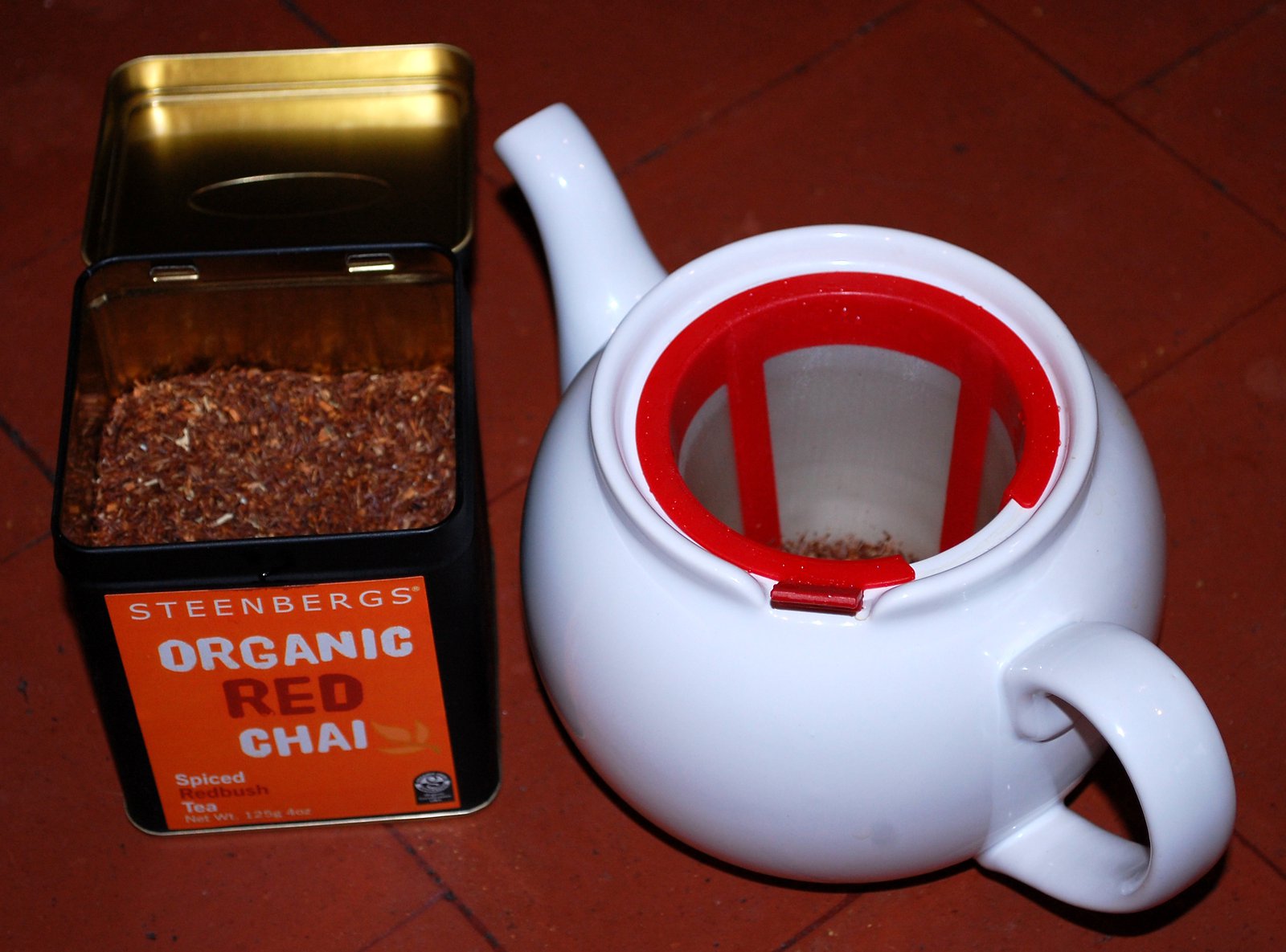 Add the light muscovado sugar, saffron and ginger.  For the vanilla, slice this lengthways and scrape out the vanilla seeds into the rooibos tea, then place the whole bean into the liquid for good measure.

Place the pears upright into the pan, put the lid carefully over the pears slightly off the rim.  Bring to the boil, then reduce heat to a gentle simmer and poach for 45 minutes until the pears are perfectly soft; you may need to adjust the cooking time depending on the ripeness of the pears.  Take the pears out of the sauce, put on a plate and leave to cool fully.

Strain the sugar syrup to remove the saffron and any bits.  Return the pan to the hob and heat to a vigorous boil and reduce the syrup to about 150ml.  Leave the syrup to cool.

To make the vanilla cream: pour 125ml of cream into a bowl; slice a vanilla bean lengthways and scrape the seeds into the cream; using an electric or hand whisk, whisk to a thick, whipped cream.  Place in fridge while the pears and sauce are cooling to allow the vanilla flavours to infuse the cream. 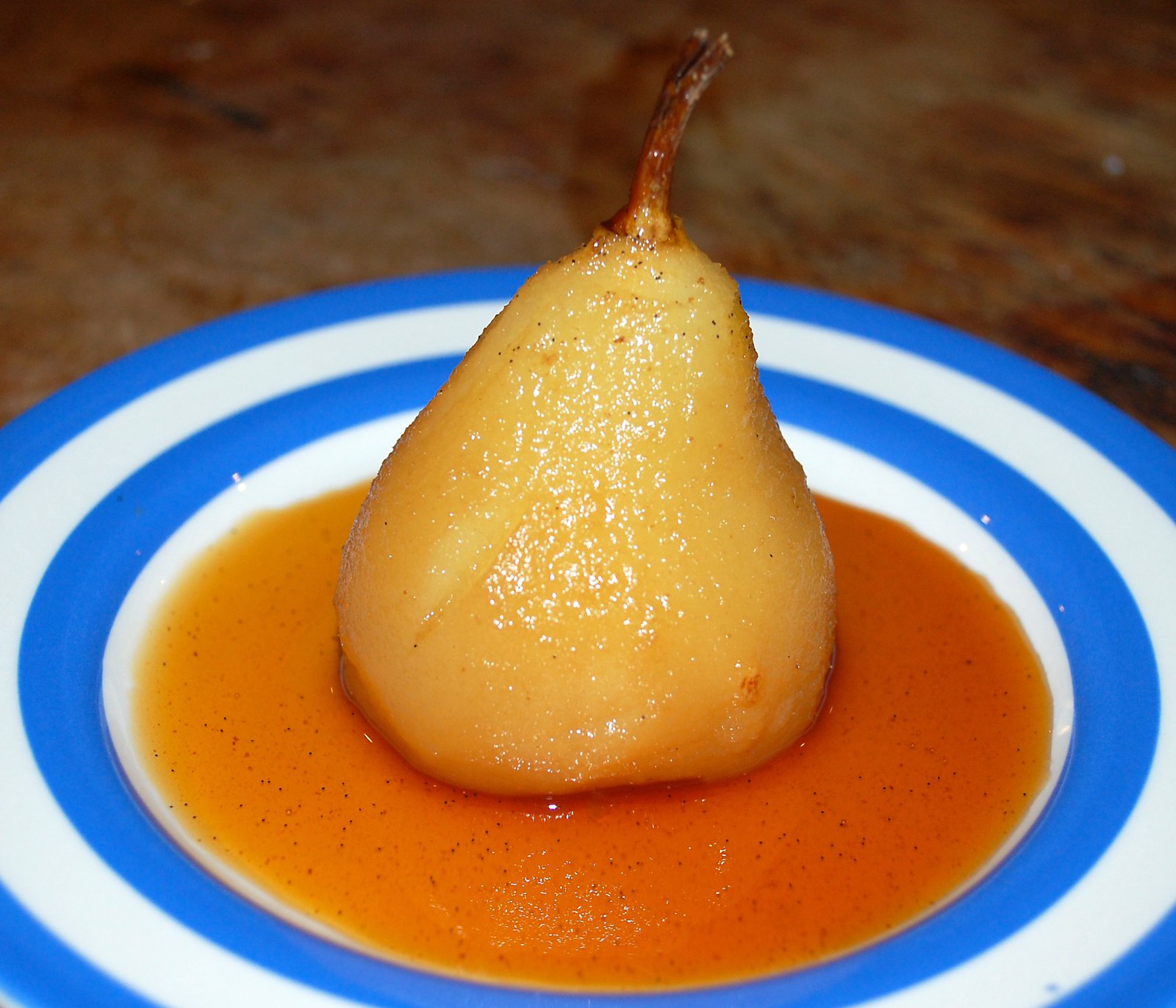 Place the pears onto individual plates and pour over some of the sauce.  Add a tablespoon of vanilla whipped cream on the side of each plate.