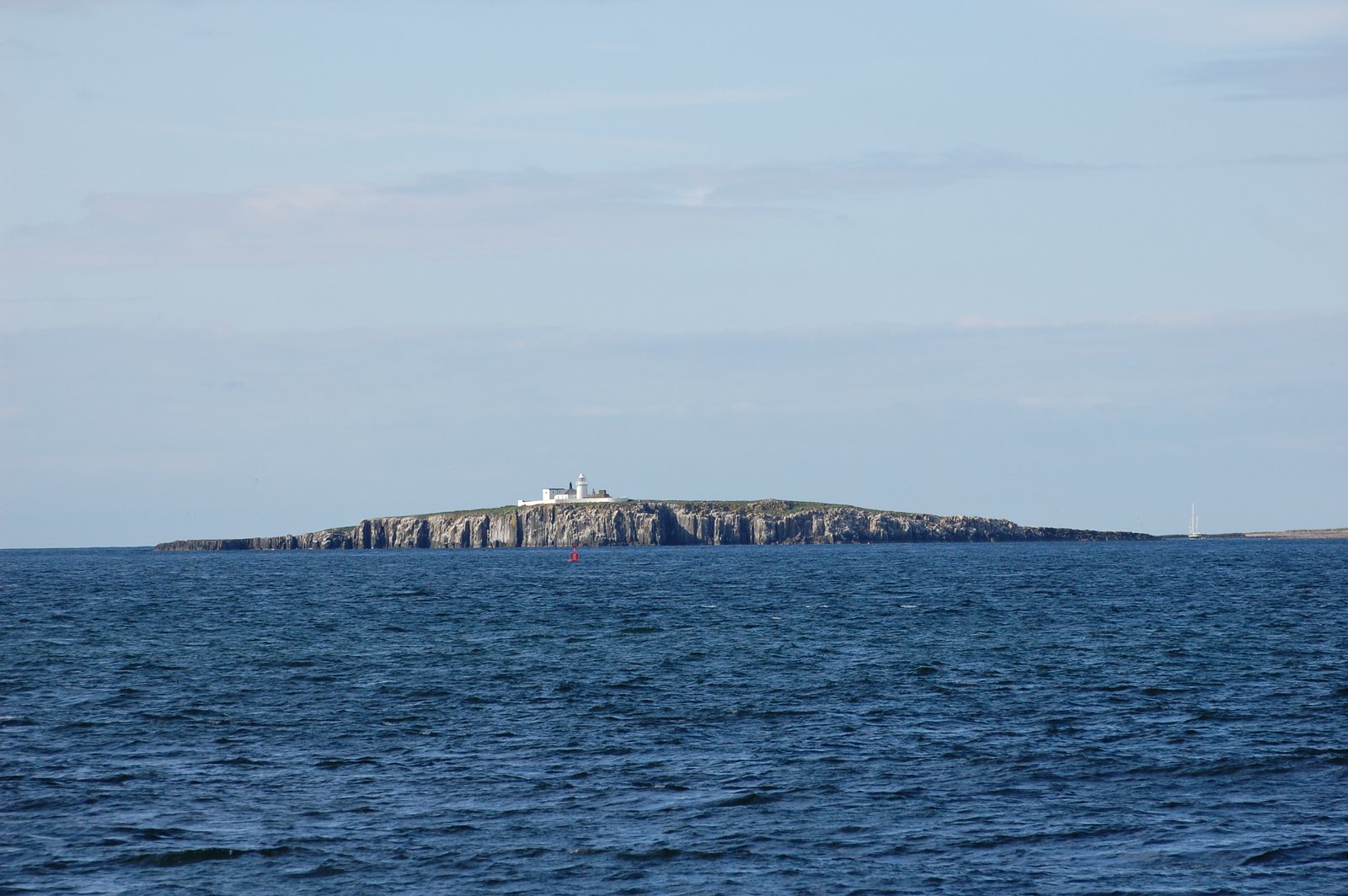 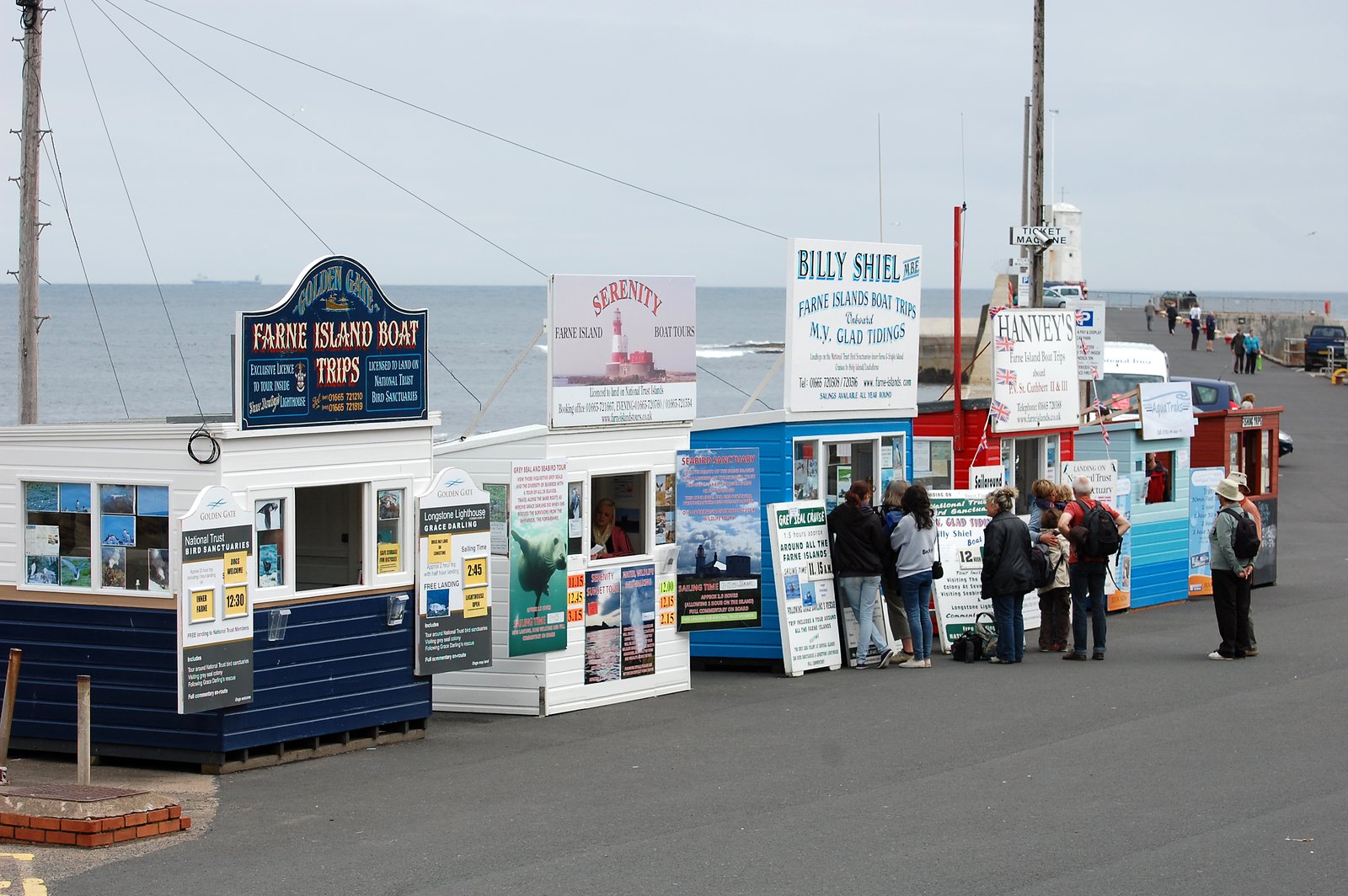 Jay was desperate to go and see the puffins on the Farne Islands, so he insisted we went on Monday with its ominous, dark and brooding clouds.  Sure enough it began to drizzle as we drove out of High Newton-by-the-Sea.  We booked our tickets at Billy Shiels Boat Trips; we Steenbergs have always gone with Billy Shiels, while my Steenberg cousins now go with Serenity Tours.  The round trip with landing on Inner Farne cost £35 for 2 adults (£13 each), 1 child (£9 each) and various harbour fees.  There is free entry onto the Farnes as we are National Trust members but otherwise this costs extra; they generally have a good joining deal going so it is a good time to renew any lapsed memberships.  The National Trust look after the islands with quite a large number of wardens on the islands, protecting the chicks and seal pups. 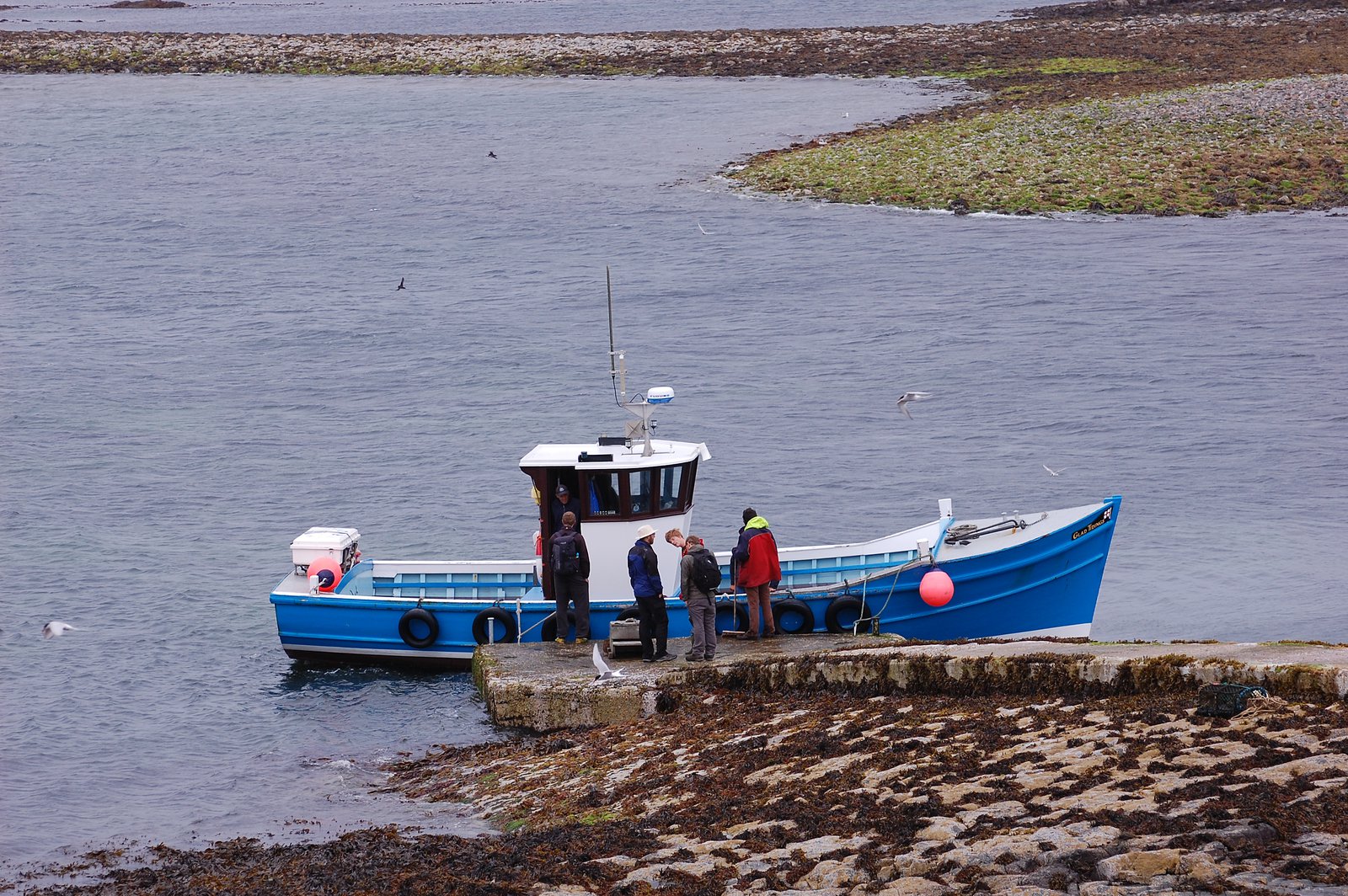 We were late for the sailing, so had to charge down to the end of the pier as Glad Tidings was about to leave.  All Billy Shiels boats are named Glad Tidings and range from the original few which are open boats to the large Glad Tidings V, which is for the non-landing tour and is mainly covered.  We sailed on Glad Tidings III which is also partly covered but not so large.  The North Sea was quite choppy and we rolled with the waves, which I find quite exhilarating, but Jay was far less keen about.  By now it was windy, raining and the waves were getting up.

At this time of year, there were still kittiwakes with their nests perched on ledges on the cliff faces, plus a few guillemots and razorbills still either on ledges or strutting on the top of rock stacks jutting out of the sea.  Most of these can be found on the dramatic Pinnacles off Staple Island and if you come in May – June these are chocka with these auks.  As you drive past, you can see the black silhouettes of shags and fewer cormorants, breaking the skyline; often these can be see with their strange bat-like posture of holding out their wings to dry in the wind or sun as they do not have any oil on their feathers, so must hang them out literally to dry.  In the water, you will often see their snake-like heads poking out of the sea as they drift and fish along the island edges and further out to sea.  Puffins congregated on the cliff tops, huddling together against the wind that buffeted against the rocks, while kittiwakes seemed to move tighter into the nooks upon the crags where they nested. [Many more photos of birds at http://www.flickr.com/photos/steenbergs/sets/72157624111478125/] 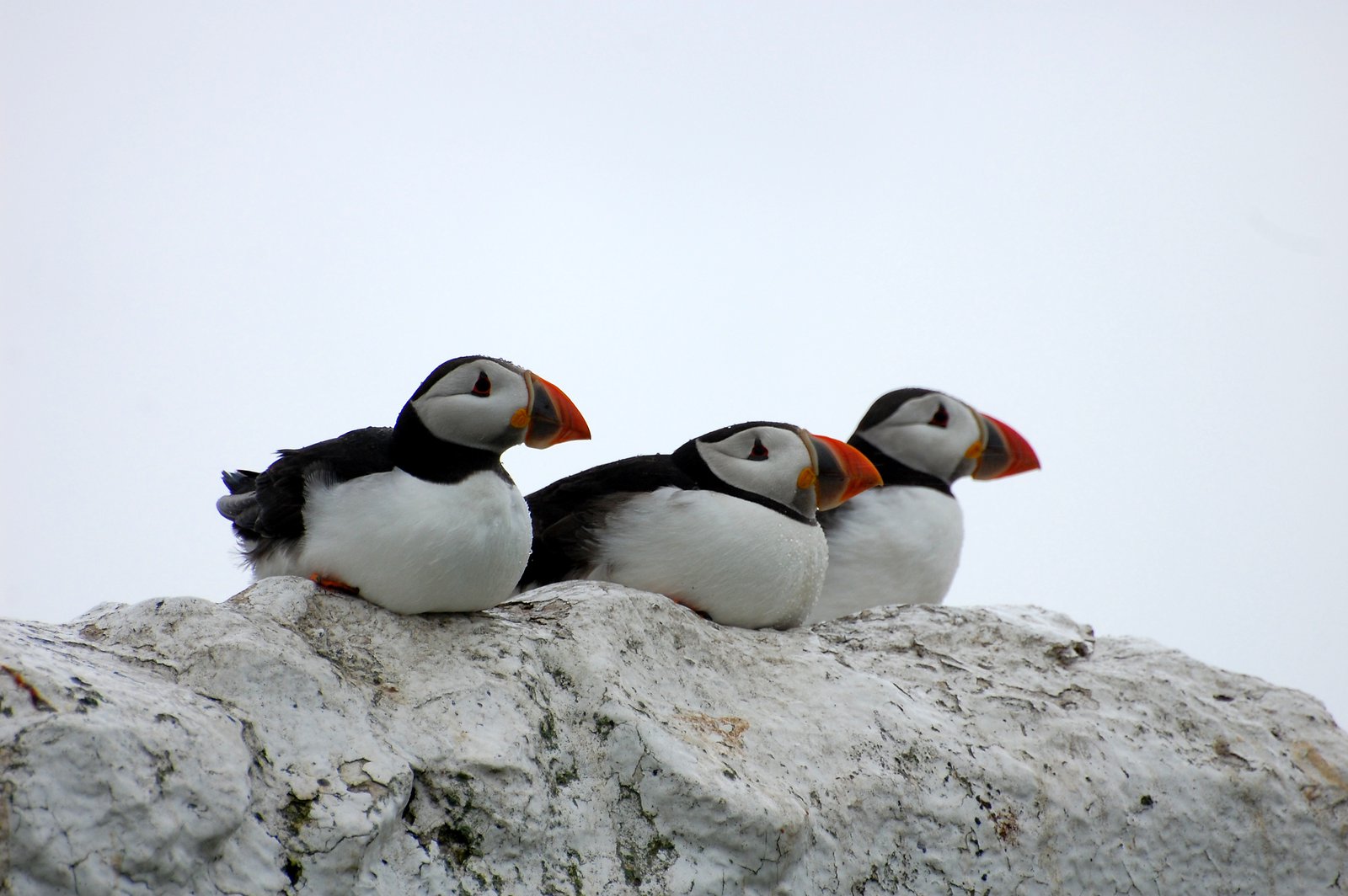 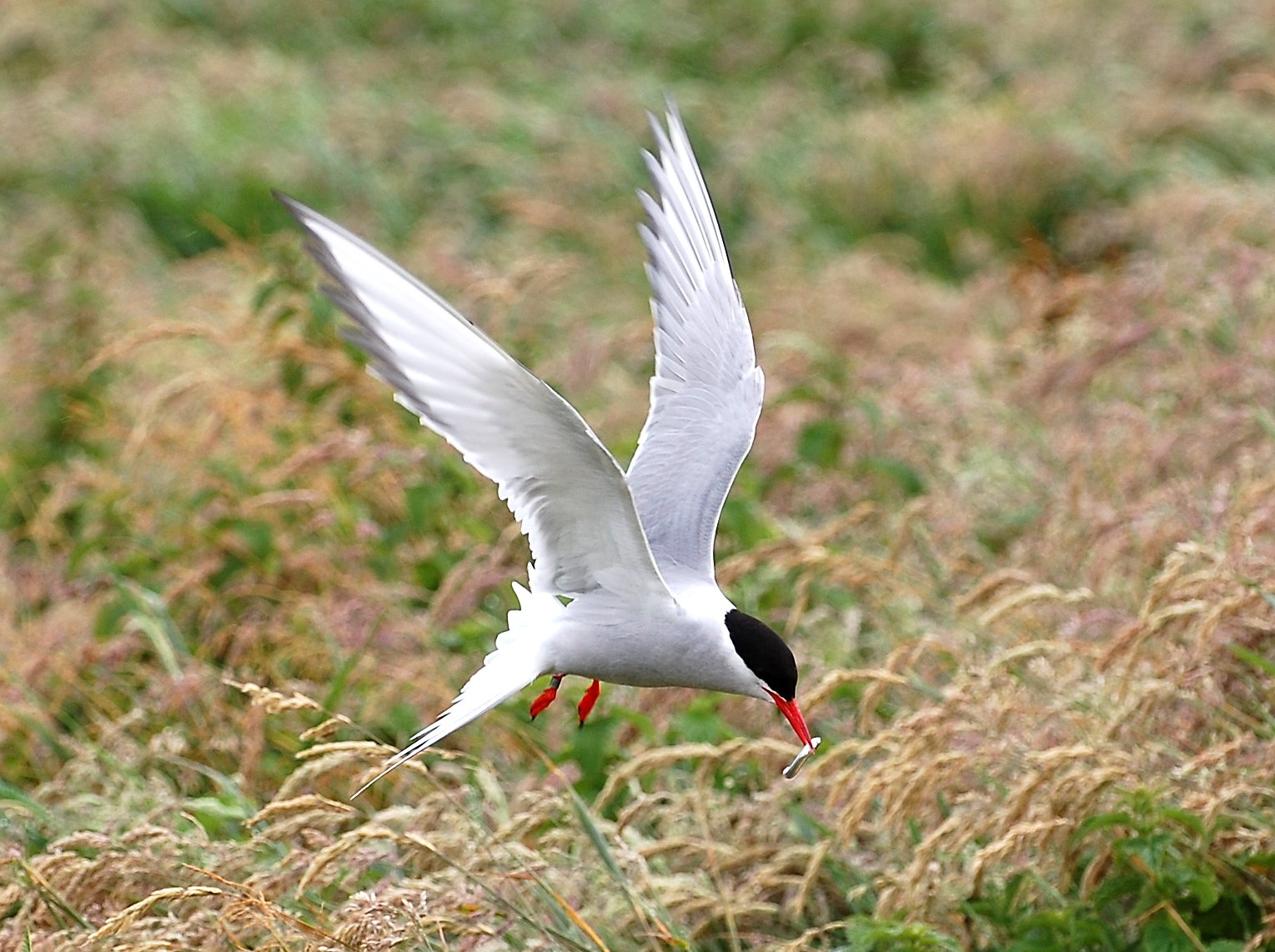 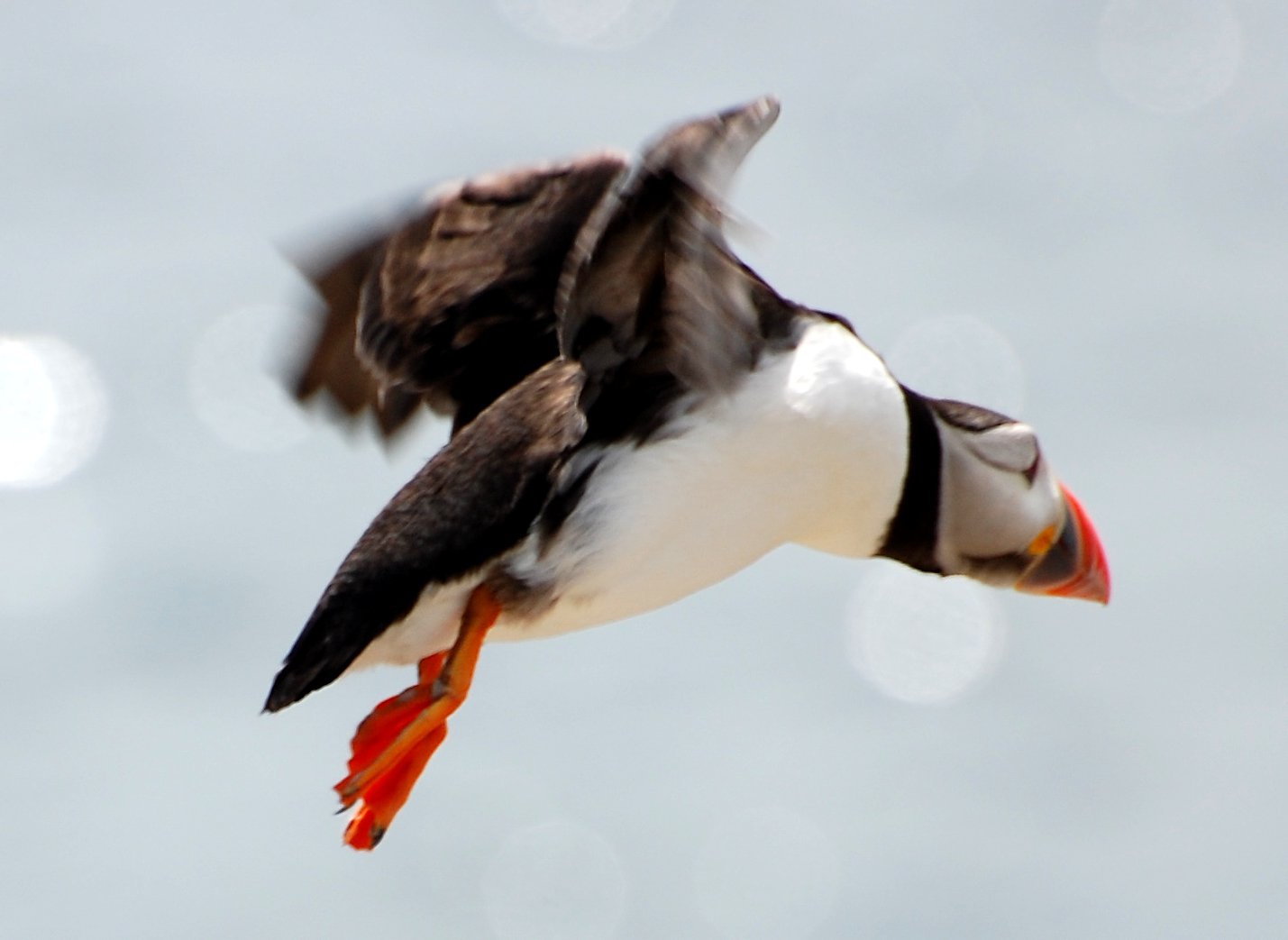 Then, you drive further out to Longstone Island and the lighthouse that is famed for Grace Darling.  Famously, on 7th September 1838, Grace Darling and her father rowed out twice to Big Harcar to rescue nine survivors from the paddle steamer, the SS Forfarshire, which had run aground.  Their amazing daring made her a national heroine.  I do find it odd that you are still told all this in spite of exciting waters – some of the boats did not go out today and there were certainly few takers for the tour on the Monday!  I remember many a trip out when a child in rough waters – once we went out with my aunt and cousin from Germany when the waves were vast to the eyes of a small child, then the boatman asked us to haul a tarpaulin over us for protection from the spray.  However, whenever someone moved water coursed all over the unlucky person at the end, plus passengers were being sick over the edge.  But we got to shore safely in spite of what seemed a scary trip.

We were so wet through, with frozen hands and wet feet that we took shelter in the Pinnacle Bazaar and bought some cut-price trousers and changed into these there and then.  Oh the joy of being dry!  We nipped next door to the Pinnacle Fish & Chip Shop and sat to eat cod and chips with mushy peas (£6.25) with a warming mug of tea, with scampi and chips (£7.95) for Jay with a cup of water.  Slowly life came back into frozen hands, feet and stomach.  The batter was light, the fish fresh and succulent, the peas just right and the tea spot on.  The hunger was talking, but it was still a delicious lunch.  Afterwards, the rain had abated and we had ice creams from Coxons opposite – a 99 for me (£1.75) and a Refresher for Jay – or you can get ice creams at Pinnacles which tasted suspiciously similar to those at Coxons but cheaper at £1.20 for a 99.  Through rose tinted spectacles, this could even have been summer. 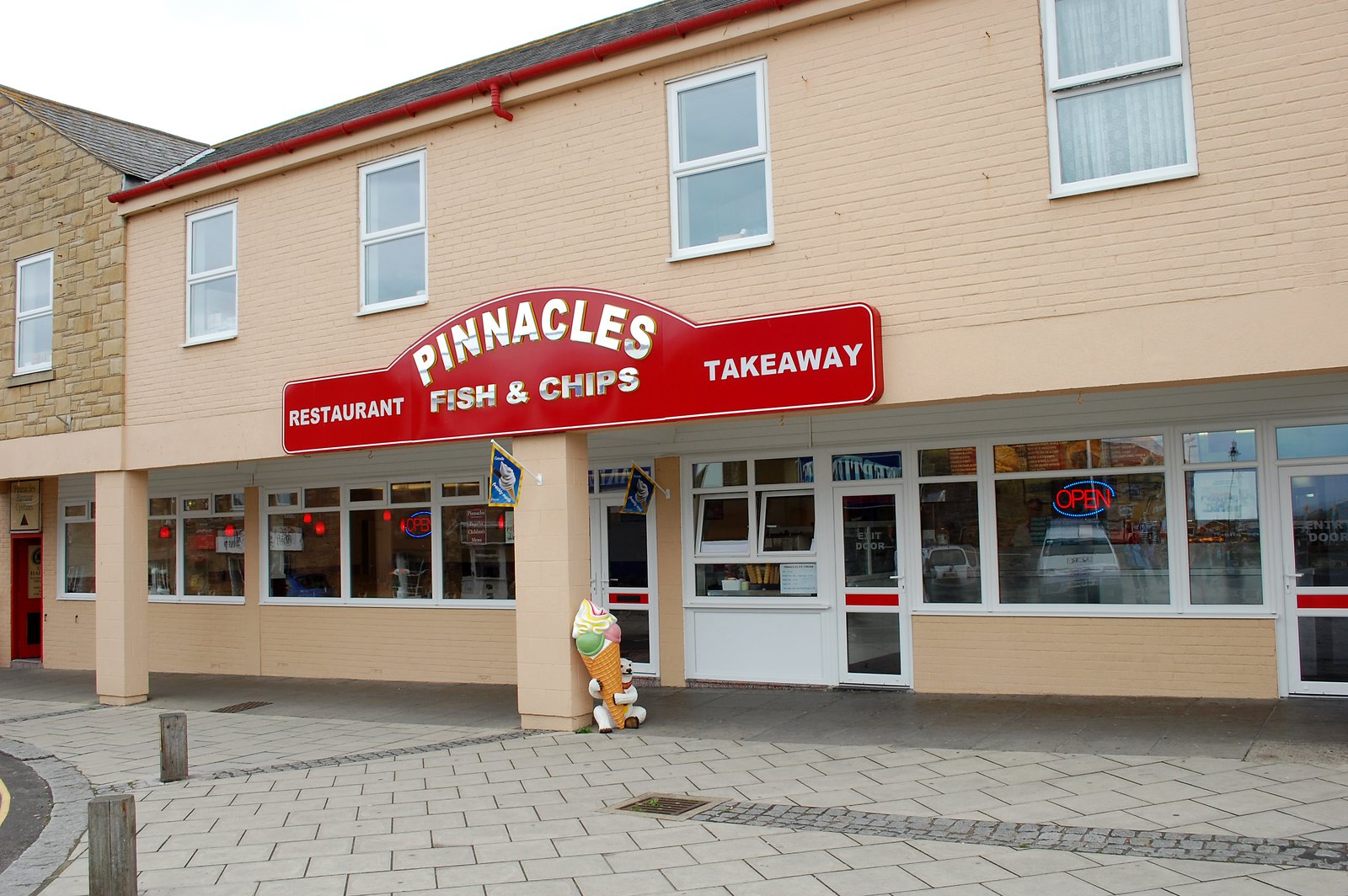 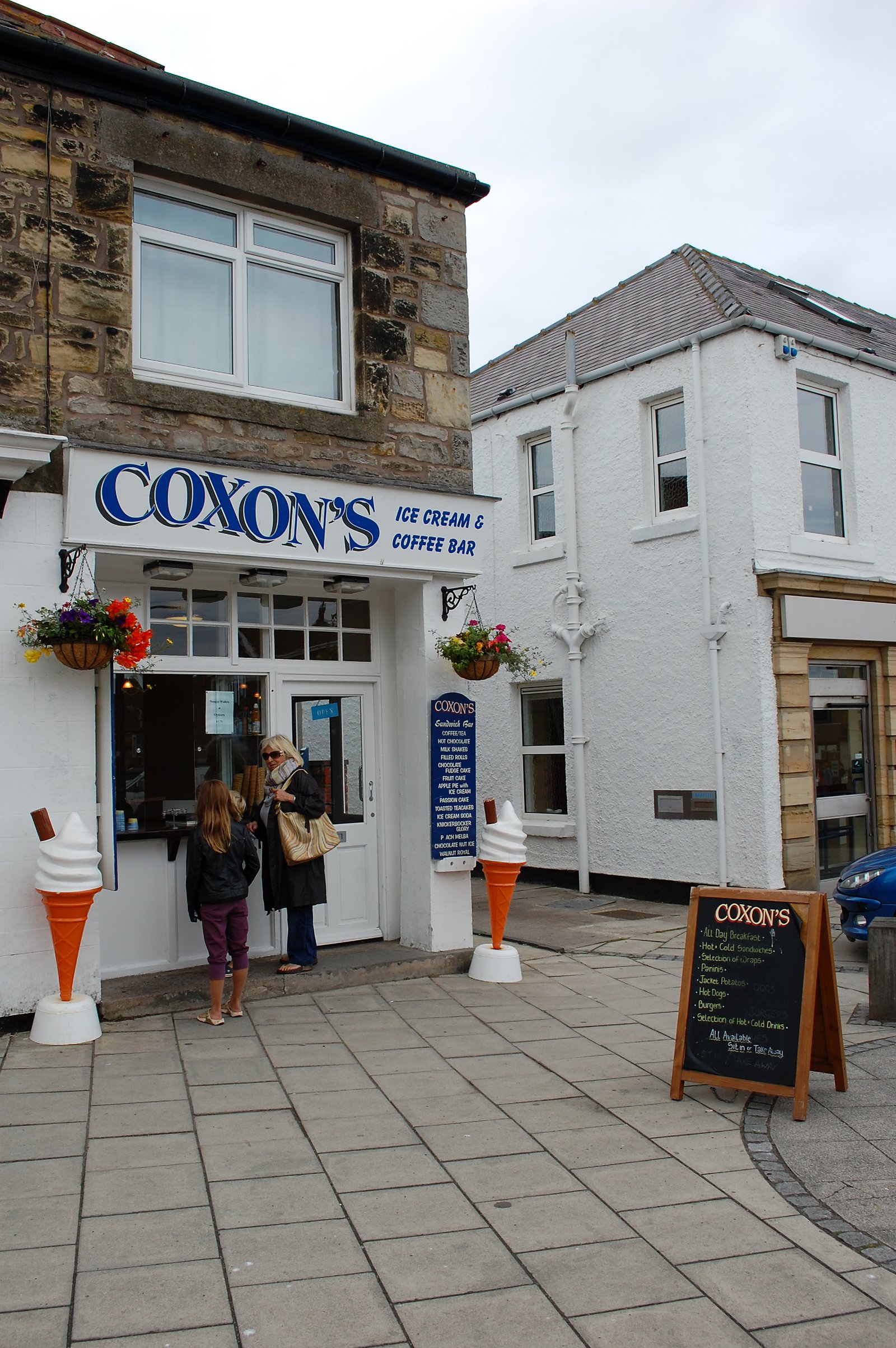 On Tuesday, the day was different: no wind and a blue sky.  We decided to go again and enjoy a dry trip to the Farnes.  This time the crossing was faster and smooth, but on the downside all the boats were out so there were more grockles like us and the birds were out on the water, so on Inner Farne there were less birds onshore.

We watched the puffins bob on the water, then either skim across the water as our boat (Glad Tidings IV) approached or break the water clumsily, running on the surface then taking flight like torpedoes flapping furiously in the air.  Puffins are the little comedians of the seabird world, with oversized feet that waddled along like clowns whacky-quacky shoes and they fly with a style that Charlie Chaplin would have approved of.  Shags and cormorants floated closer to the islands, darting under water every so often to catch a fish.  Gannets flew past in small flocks of 5 or 6, with large wings moving in slow motion elegant against the skyline, so different from the puffins.  A few guillemots patrolled the top of the stacks, while kittiwakes every clung to ledges.  [Many more photos of birds at http://www.flickr.com/photos/steenbergs/sets/72157624111478125/] 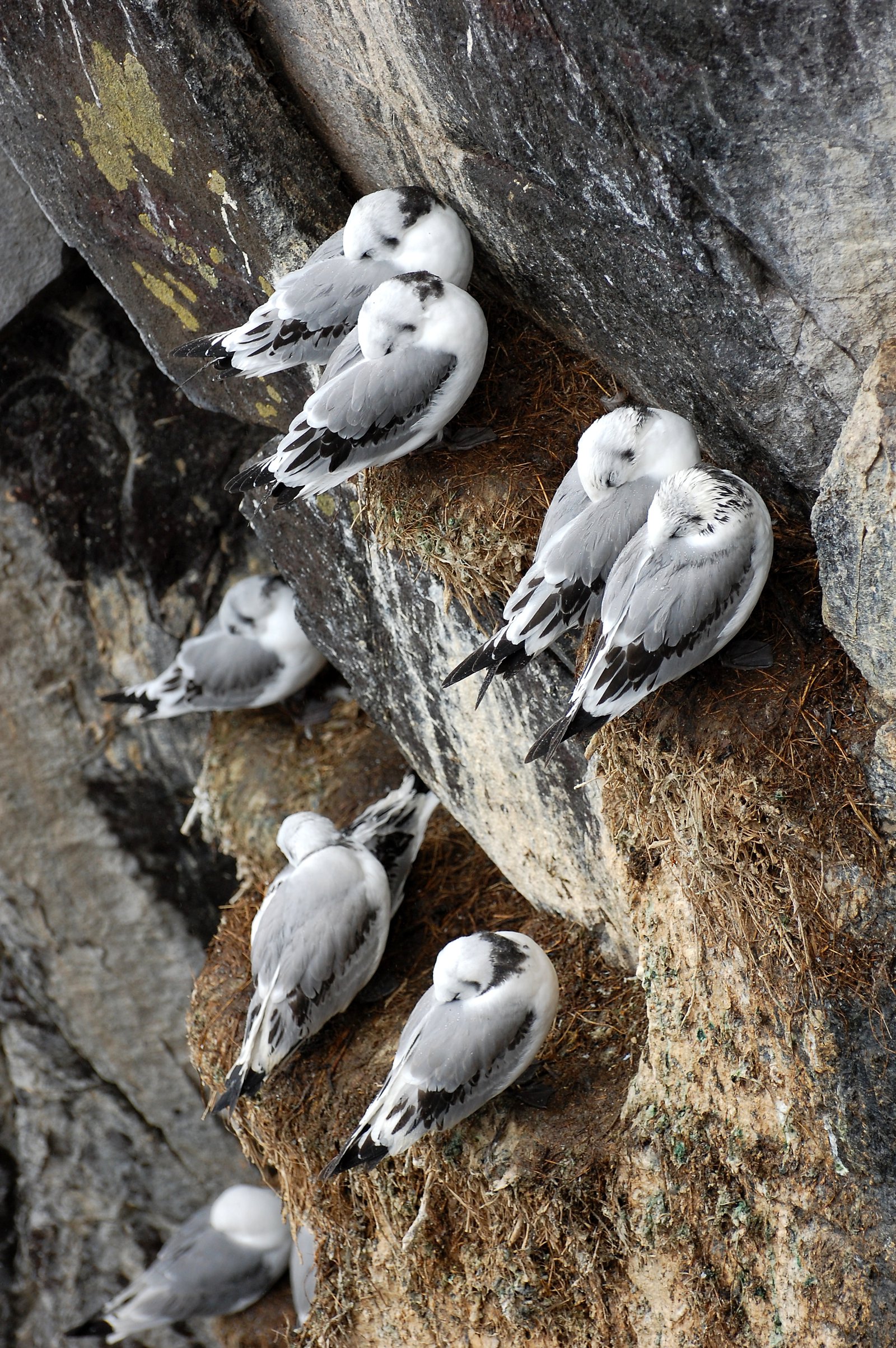 Off all the islands, but especially Northern Hares and Wamses, grey seals lazed on wrack covered rocks.  Every so often they barked at each other and a few would waddle, then slide into the water, switching from overweight clumsiness on land to fleet swimmers in the sea, poking their curious and mischievous heads out of the water, watching us looking at them. 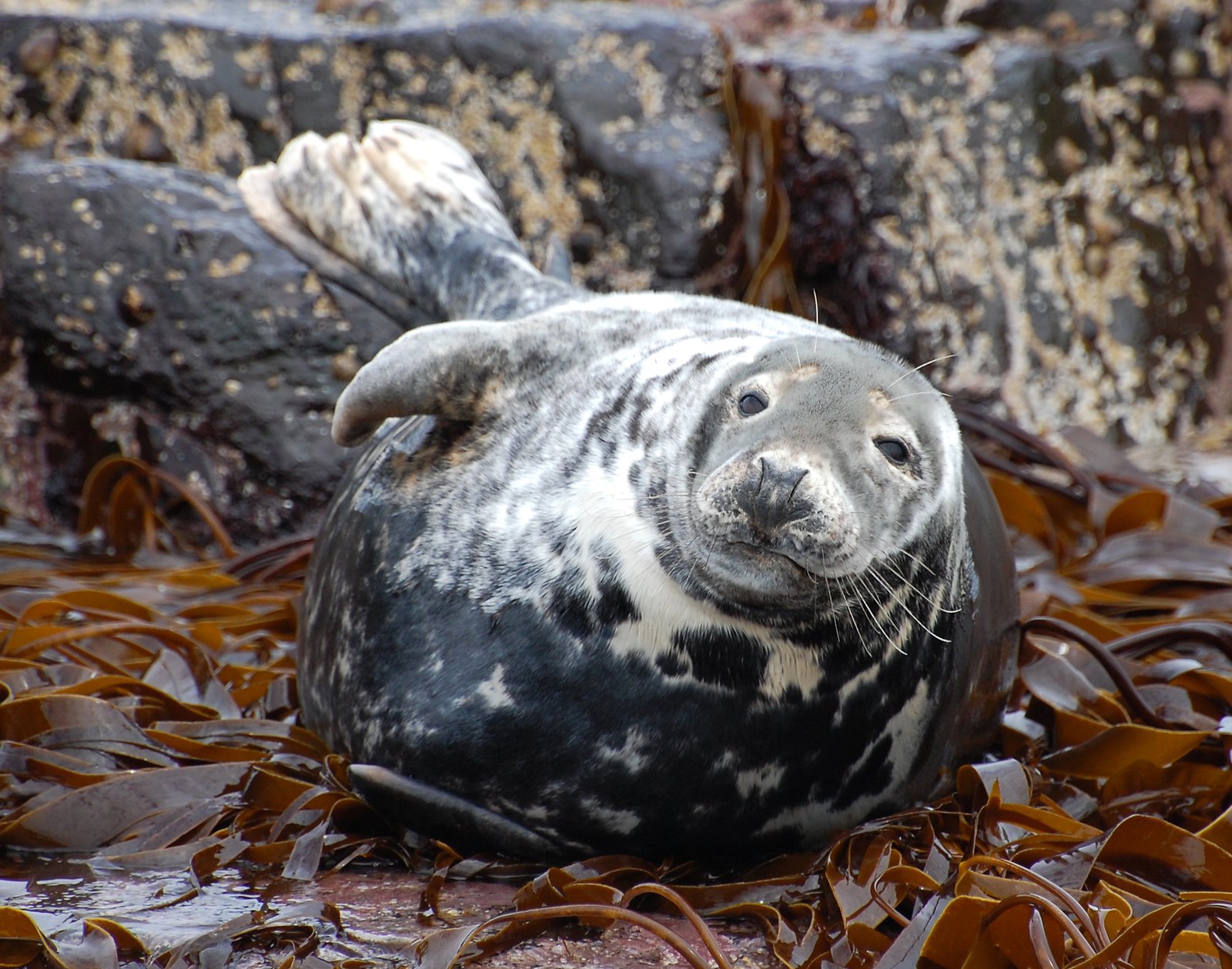 Then again to Inner Farne where you could enjoy the puffins again and watch the Arctic terns and their acrobatic flying and gaze at their elegant shapes.  Mothers protected nest by dive bombing and screeching a nasal kee-arr.  We enjoyed the view which shows the importance of this area to early Northumbrian power: Lindisfarne and the Celtic Christian church to the North on Lindisfarne, then the rock that was the base of Northern thanes, jarls and kings of Bamburgh Castle and the holy retreat of Inner Farne, with Dunstanburgh Castle to the South.  And of course the Inner Farne was the refuge for St Cuthbert, the most important Northern Saint, and where St Aidan came for contemplation every Easter (the Celtic Easter).

Back in Seahouses, we ate fish & chips at Lewis’ where we have eaten for many years.  The batter was light, but the fish less fresh, though the chips were good.  The peas came whole rather than mushed and my tea was forgotten.  Good but not as good as Pinnacles, which was not helped by a sign saying fresh crab sandwiches outside that were not available – we were told tomorrow, but I think it was the never reached mañana.  I did not try Neptune which is the other choice, but my sister went with her family and said it was excellent. 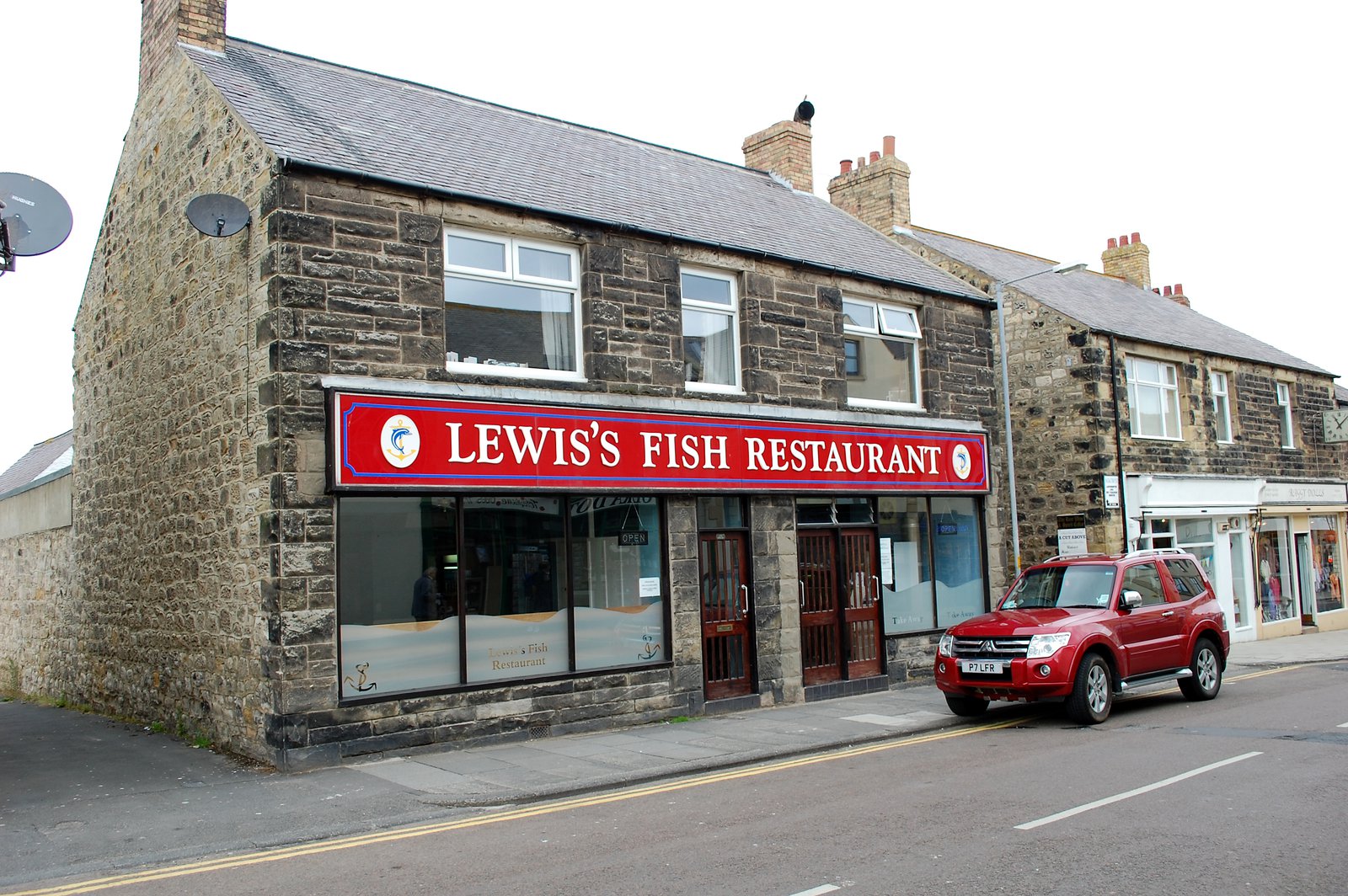