A Journey Through Back To True Korma Recipes (Part 1)

When I made the Chicken Tikka the other day, I also made a Lamb Korma.  The end result was nothing like the British Kormas that I had been used to, so I decided to investigate the concept of the korma further.  The first thing to say is that I liked to alternative korma style that I had stumbled on, and secondly that the British korma has little linkage back to the true korma.

What seems to have happened is a story of early British curries.  When the curry house started appearing in a wave in the 1960s - 1970s, the style of cuisine was rural Bangladesh and these early "Indian chefs" realised soon that their new clientele wanted inter alia a range of curries that included a hot curry, a medium one and a mild one.  These morphed into the Anglo-Indian vindaloo, chicken tikka and korma classics of modern British-style Indian food.  For us Brits, korma now means a mild, creamy meat dish, whereas the true korma originated out of the Islamic courts of the Moghuls and other Muslim rulers of India over the 10th to 16th centuries.  This korma from India, Pakistan and Bangladesh is a rich banquet dish that is showy and uses lots of yoghurt together with expensive flavourings like cardamom, nutmeg, rose water, saffron and nuts like almonds and dried fruits.

My first trial was a variation on a simple korma, called Korma Narendra Shahi, which is slightly sweet and mild, with a pretty rose water flavour which some might not like, but is something I enjoy and is a key flavour of Arabian and Indian banquet-style-food; if the rose flavour is an issue just reduce the levels of rose water you use.  It is based on a recipe from one of my favourite little gems of Indian cooking "Cooking Delights Of The Maharajas" by Digvijaya Singh; this is a collection of recipes collected from the Royal kitchens of India by Mr Singh who really would be the Maharaja of Sailana, hence he was able to collect these recipes and continue his father's quest to find some of the best recipes from his contemporaries' households.

The next korma recipe will be a mash-up between two of the really fine recipes in the same book, mixing up the Persian style Korma Shiraz with a recipe for Korma Asafjahi from the kitchens of the Nizam of Hyderabad in 1905 and will follow in my next blog...

500g / 1lb onions, half chopped finely and the other half sliced thinly into rounds

¼tsp – 1tsp chilli powder (vary this to taste, but it is meant to be mild)

A pinch of saffron diluted in warm water

Start by dry frying the cumin seeds, if you are beginning with whole ones. When nicely toasted, crush them in a pestle and mortar.  Make the saffron infusion by placing the saffron filaments in a mug or glass and pour over newly drawn water that has just been boiled and leave to infuse for 30 minutes then strain out the saffron.

Heat the ghee in a frying pan and add the onions and fry gently until translucent.  Add the chilli powder, cumin powder and salt and fry together for 1 minute, then add the yoghurt, stir well and cook for about 10 minutes at a gentle simmer with the lid on. 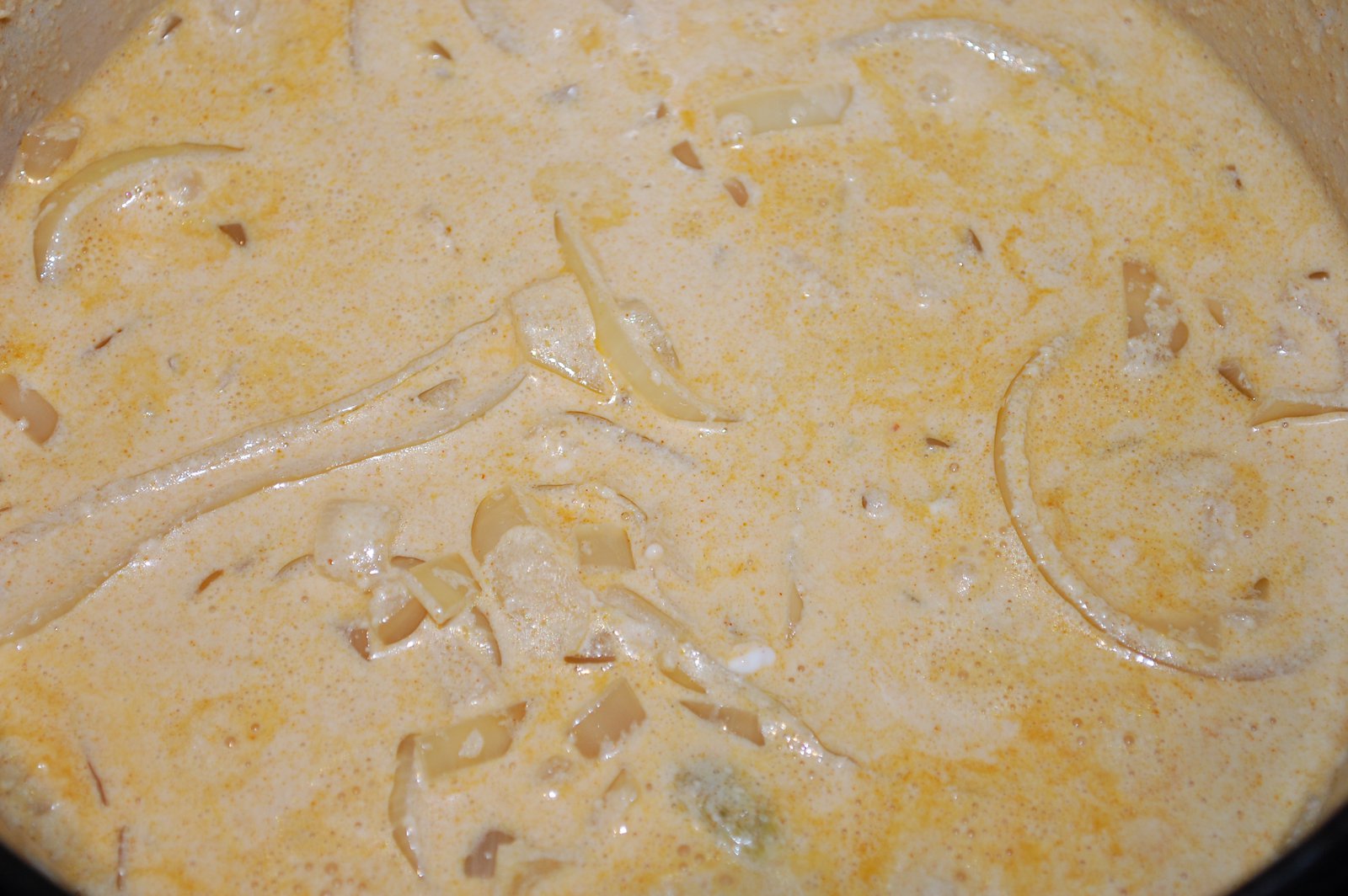 While you are frying the onions, start frying the lamb pieces in ghee in a separate frying pan.  Cook these quickly to brown and seal the edges.  When ready, which should be as the korma sauce is finishing its 10 minutes' initial cook, add the lamb to the sauce, cover and cook at a medium heat for 1½ hours.  Lift these pieces of lamb out of the ghee with a fork or slotted spoon, i.e. leave the fat behind.

When the meat is tender, which should be after about 1½ hours, simmer with the lid off to let the liquid dry up almost completely.  Now add the remaining ingredients (saffron, rose water, coriander leaves and garam masala) and stir until warmed through. 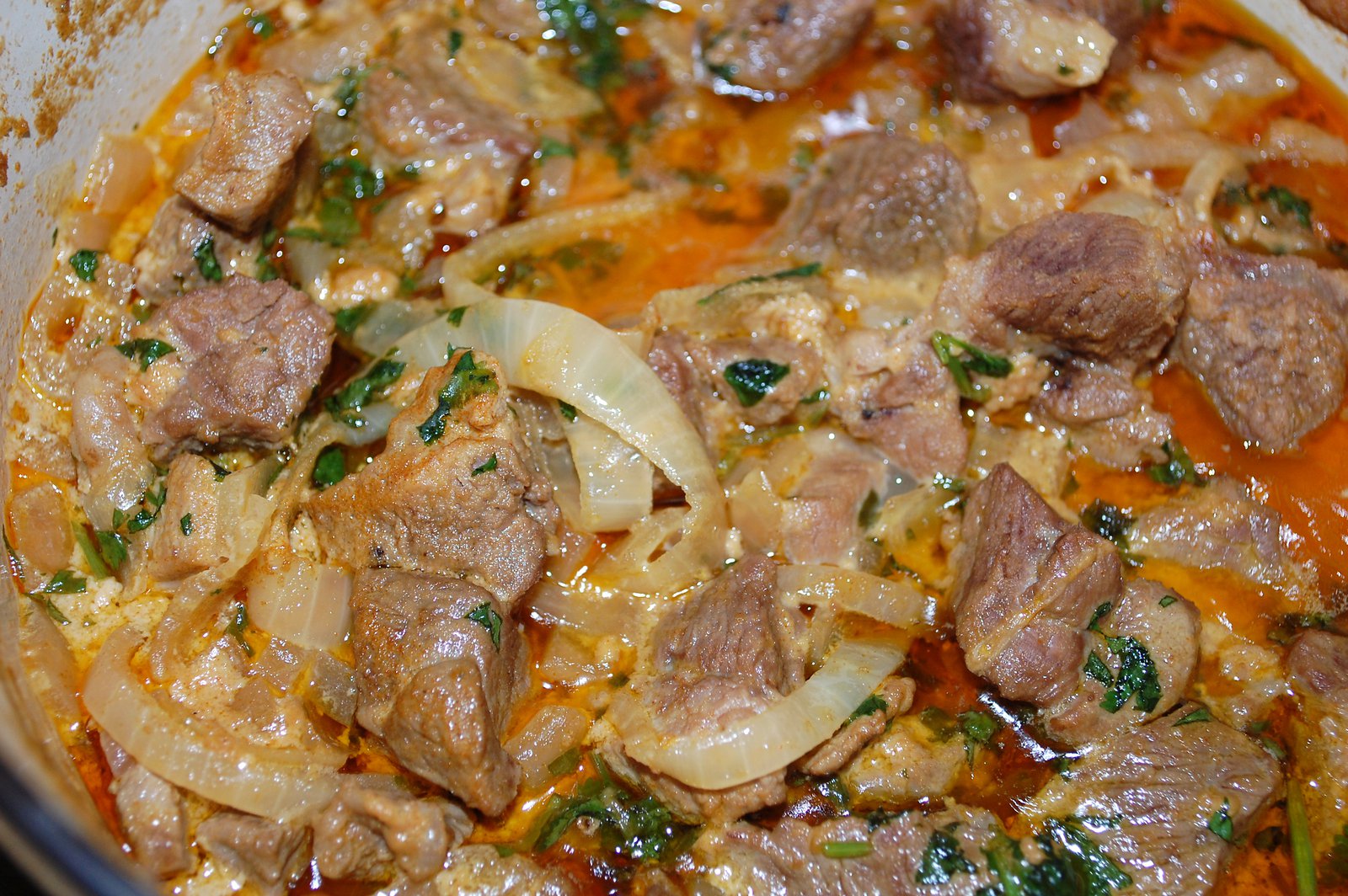 Serve straight away, or even better leave a day and eat the next day when the flavours are much more subtle and have infused completely through.