700 years ago there was a battle fought at Boroughbridge and we've just celebrated its anniversary. It was the first time that the longbow was used in battle, 24 years before the decisive English victory at Crecy.

We’ve just celebrated the 700th year anniversary of the Battle of Boroughbridge, an important event for our local community.

Sophie helped at the coffee morning in the village hall. She and her mum went to watch the sword fighting display in Boroughbridge and the commemoration service by the battle cross in Aldborough, where wreaths were laid in memory of those who died many years ago, including one from the current Earl of Hereford because his ancestor was killed on the Bridge. Later, Sophie and I did the guided walk over the Bridge and along to Milby Lock. I last did the walk in 2010 and wrote it up in a blog, "Walk In North Yorkshire - Battle of Boroughbridge". 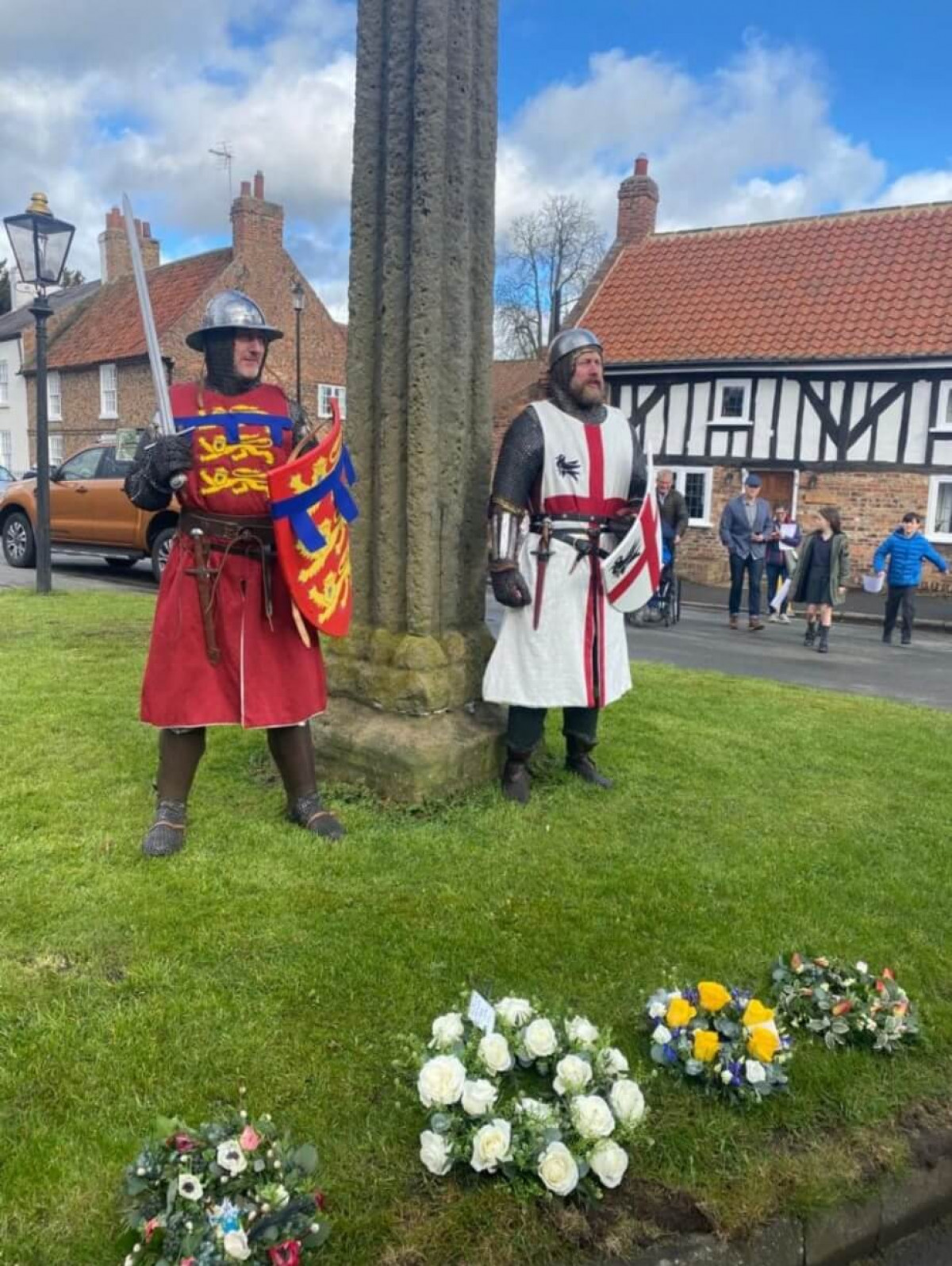 Knights at Battle Cross for Battle of Boroughbridge, March 2022 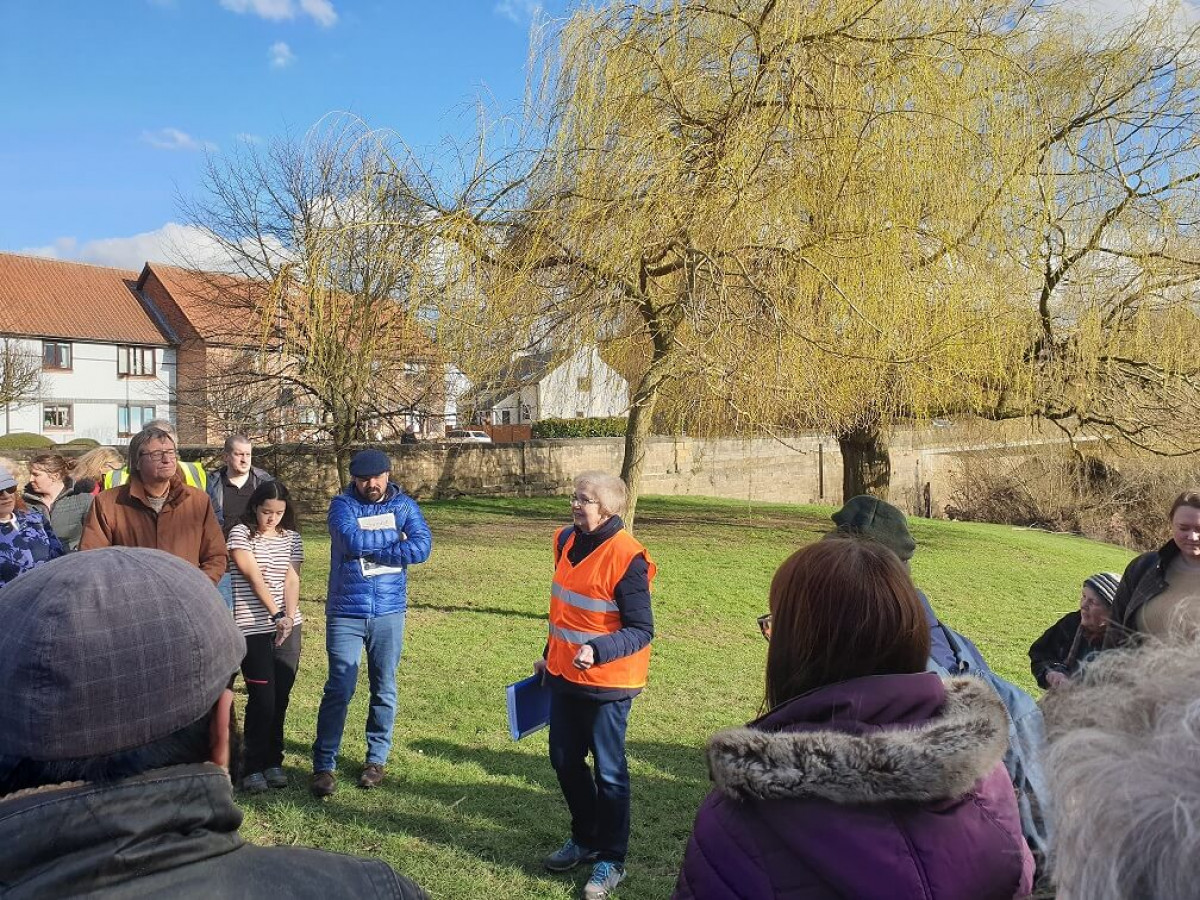 Knights at Battle Cross for Battle of Boroughbridge, March 2022

What was the Battle of Boroughbridge?

It was the culmination of the power struggles between the King, Edward II, and the nobility, headed by the King’s cousin, Thomas, Earl of Lancaster, who was one of the main disruptors in the English power struggles between the Crown and the Barons. The other key centres of power were Robert de Brus (Robert the Bruce), who was King of Scotland and battling to maintain Scotland's independence and establish its political reach, the Marcher Lords, who were basically autonomous rulers of their lordships, and Edward’s estranged Queen, Isabella of France (the She-Wolf of France).

It was, also, important as the first battle where the longbow was successfully used in combat, English on English. This proved its worth and it would be decisive 24 years later at the Battle of Crécy, where Edward III, Edward II’s and Isabella of France’s son, totally beat the French.

Although the details can become complicated, the essence of the battle are fairly simple. The Marcher lords, including the Earl of Hereford, rebelled over an inheritance dispute, and Lancaster sided with them against the King, then he entered into an alliance with Robert de Brus. For once, the King acted decisively, crossed the River Severn and secured the surrender of several Marcher lords. He then marched north and faced Lancaster (who had marched south from Doncaster) at the Battle of Burton Bridge, over the River Trent, but on 10th March 1322 Lancaster baled after he realised the size of the King’s forces and then when the King crossed the river further upstream he headed back north.

Lancaster may have been trying to move up the Great North Road (the A1) to Dunstanburgh Castle in Northumberland, where he was protected by Robert de Brus, either with Scots to come south to his rescue or (more likely) that he would slink away into Scotland, out of reach of the King of England. He and his forces settled down south of the River Ure at Boroughbridge.

But Harcla was at Ripon, where he heard that Lancaster was in Boroughbridge. He moved his force to the north side of the Bridge, where Langthorpe is now located. After an attempt by Lancaster to parlay with Harcla, they realised they would have to fight because the King’s forces were moving p from the south. Harcla had c. 4,000 troops and Lancaster had c. 800 men-at-arms, plus he would have also had some general soldiers.

We’re now on 16th March 1322. During the morning, Harcla set up his forces (pikemen and dismounted knights) around the wooden Bridge and more troops on the north side of the ford. Lancaster split his men, with Hereford and Clifford leading the attack on the Bridge and he, himself, leading the attack on the ford. The attack on the Bridge failed with Hereford killed with a pike up his arse from under the Bridge and Clifford severely wounded, then this force fell into disarray. Later in the afternoon, at the ford, Harcla formed his men into a schiltron, a circular shield wall shaped like a hedgehog as used by the Scots under Robert de Brus in the Wars of Independence, then behind them he lined up his longbow men who released their arrows that darkened the sky and wreaked havoc amongst Lancaster men.

During the night-time truce, many of Lancaster’s men slunk away, while additional royal troops came up from York, and the Sheriff of York and Harcla crossed the Bridge to Lancaster and demanded his surrender. He refused and went into St James’s Chapel, where Harcla’s men took him, removed his noble clothing and dressed him in his squire’s clothes. Lancaster was taken to the King, tried for treason, and then beheaded outside Pontefract Castle, after which a cult arose over Thomas of Lancaster. Clifford was hanged at York and his executed body displayed at the Tower at York Castle that now bears his name, Clifford’s Tower.

Also, amongst Lancaster defeated troops was Roger Mortimer, a Marcher lord, who was eventually captured and put in the Tower of London, but he escaped to France – more about him later.

All did not end out well for the victors:

To walk the Battle, start south of the Bridge and cross over it, then veer left at Langthorpe roundabout into the picnic area. This is where Harcla’s troops were encamped, with pikemen underneath and at the northern end of the Bridge, which at the time was wooden. The first attack was over the Bridge, where Hereford was slain and Clifford wounded. 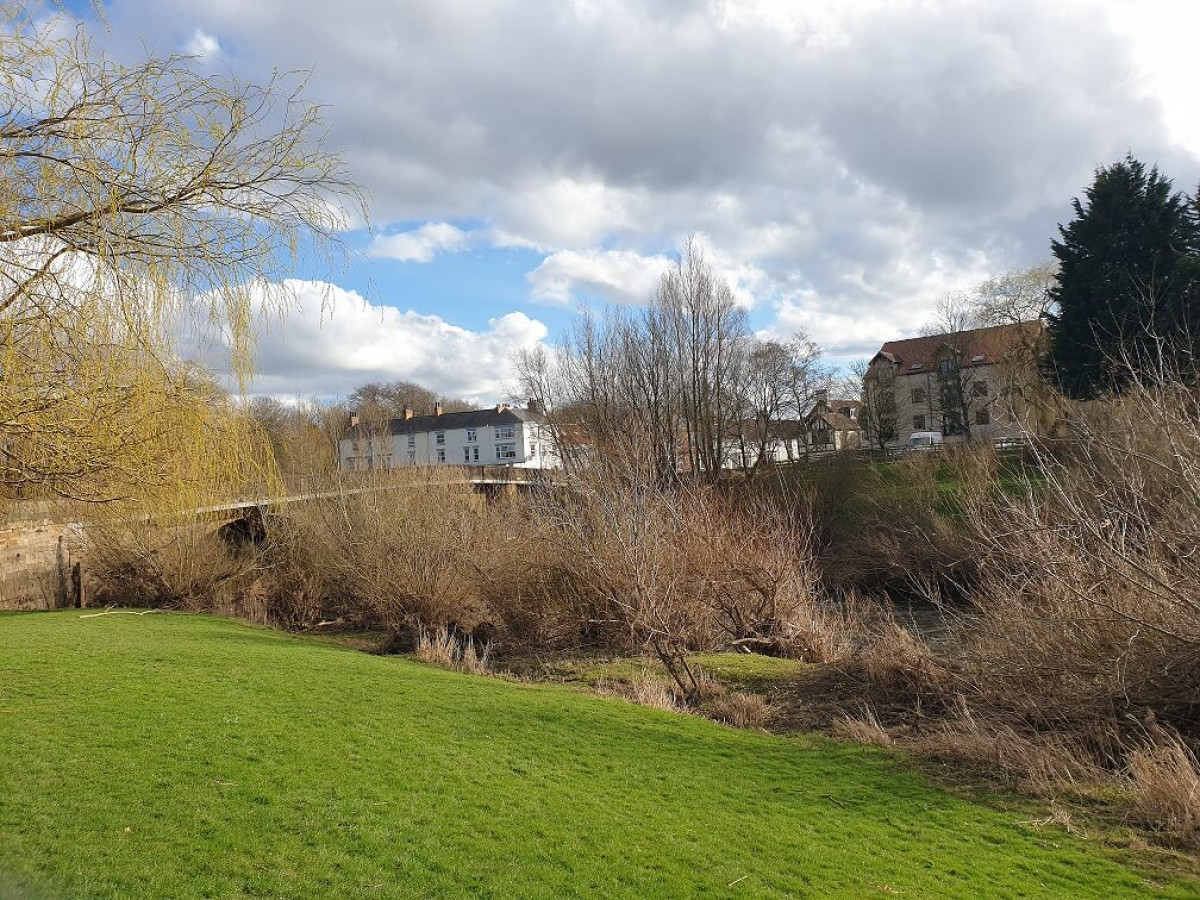 The Bridge at Boroughbridge; A Stone Replacement on Site of Original Wooden Bridge

Next, you should go back to the roundabout and cross over the road just to the north of the Bridge and walk along Milby Island to its tip just before Milby Lock. Many think that the ford was here. So, Lancaster’s forces would have been encamped in the plain to the south and tried to cross the ford here in the afternoon but were held back by a schiltron and suffering injuries from the archers letting loose a cloud of iron-tipped arrows. I don’t think the ford was here but more about that later. 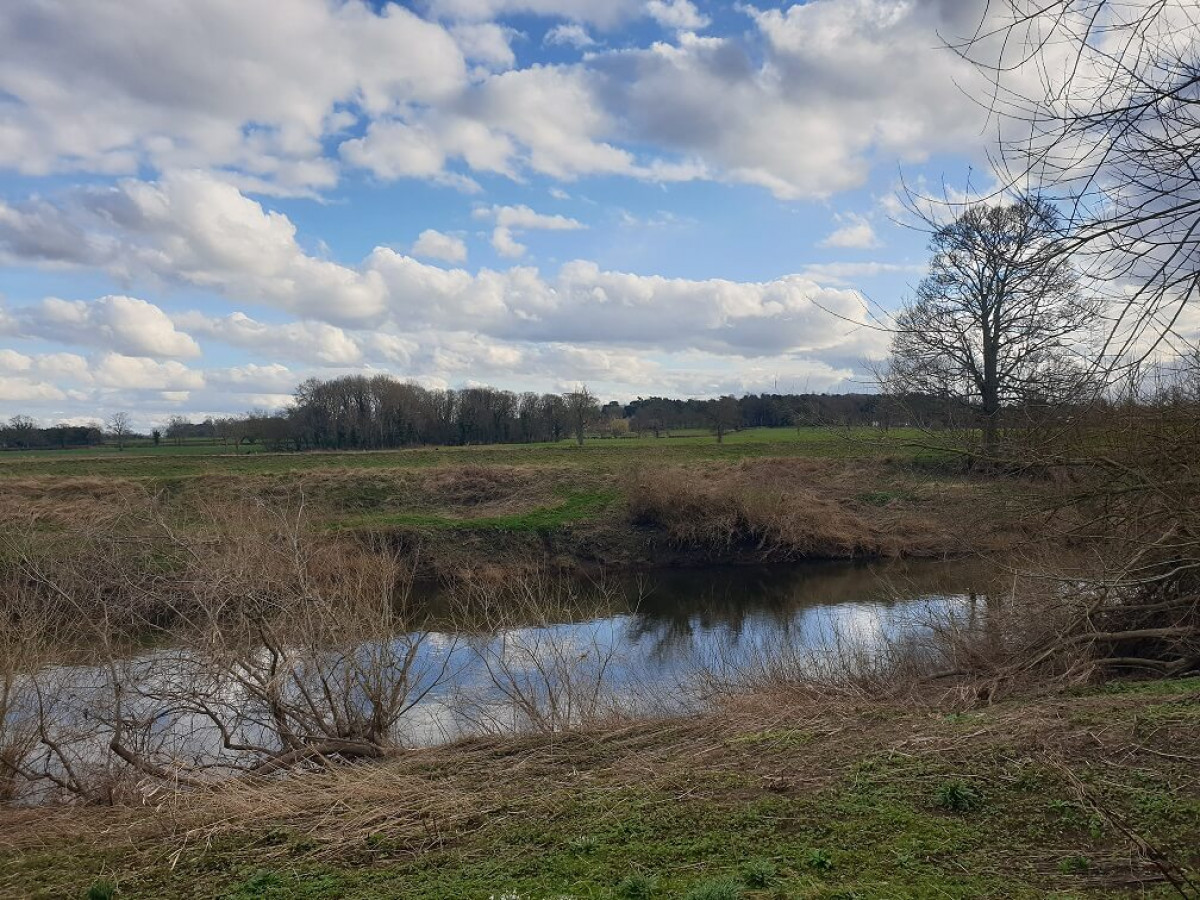 Possible Site of Ford for Battle of Boroughbridge, Milby Lock

From here, you should walk back to the Bridge, over it, then walk along Horsefair until its junction with Fishergate, go down this and up the High Street until you reach St James Square. The Chapel was likely somewhere near here, but not likely at the current St James Church on Church Street. It was here that Lancaster was taken, before being taken to York and to Pontefract where he was beheaded, apparently a privilege over being hanged.

After this, the walk leads out of St James Square along York Road, then go left towards Aldborough as the road turns south. It is a gentle walk for about 1 mile, then in the centre of Aldborough and just beside the village hall and before you reach the church, there is the Battle Cross standing on a small grassy triangle. It used to stand in Boroughbridge in the Market Square but was moved here in 1852. 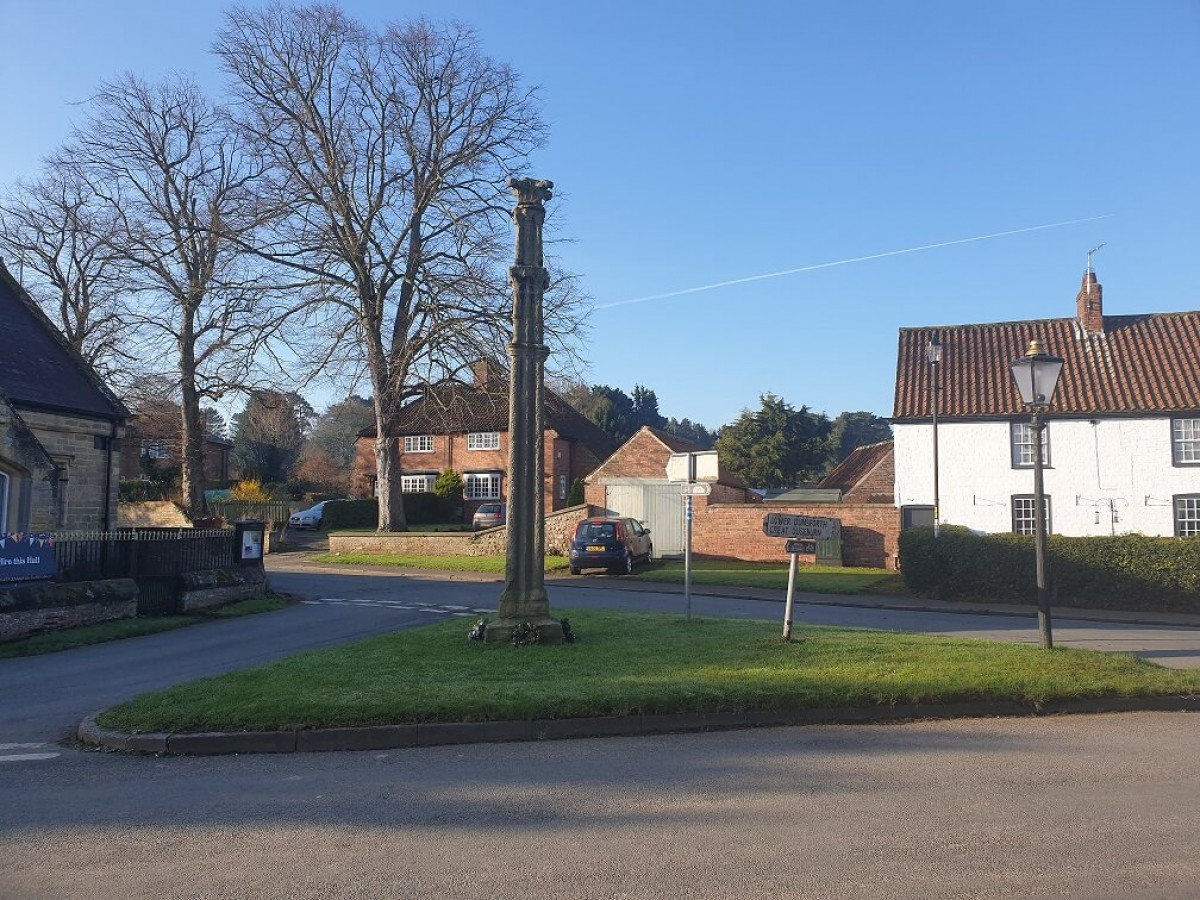 So, where was the ford, one alternative is that it is further upstream of the Bridge roughly where the weir is now, which you can see from the picnic area mentioned earlier. I’m not sure about that either. My feeling is that the ford would have been where the old Roman road crossed the Ure. Via Principalis went down Front Street and through where the church is now and then continued straight to Catterick over the fields and the Ure; this is roughly where the permissive path goes alongside the fields and up to the levee. The best way to find this is to double back from the Battle Cross, then opposite Aldborough Manor go down the concrete covered path called Little Ings Lane.  About a mile down, this turns east (to the right) along a hedge and tree lined lonnen, then at its end left or north beside a field and then up the flood bank.  Somewhere here, the Roman road crossed the river and this is where I think the ford would have been.

Why here? Because things don’t change as quickly as we all think, and Aldborough was the main settlement for many centuries and the road to Catterick went from it and across the river. There is no mention of a bridge, so it seems likely that it was forded.