I have a confession to make - I am not a big walker that likes to conquer hills and mountains, even if I know I should be striding forth across moorland and up mountains.  I am not a walker that goes into the hills for the beauty of nature; I get that beauty all around me from the wonders of trees and flowers through to birds, insects and even ants - these are all amazing species that look good and have amazing science behind them.  I like to walk for a purpose, to find something out, to seek out interesting places; I am in awe at those who do long, difficult walks, but that's not for me, perhaps I am simply too lazy.

So as well as looking for the confluences of some of our local Northern rivers, I am seeking out some of those battlefields that shaped Britain as it is, or perhaps England more so.  What I like about battlefields is that fact that they are really nonexistent, they need to be conjured up in the mind as all you get when you find the site is a field, and often a flat and boring field.  However, there is little genuine interest in how England then Britain was forged as can be shown by the fact that the memorial for the Battle of Boroughbridge was moved in 1852 from Boroughbridge and now stands proud, but forgotten, in the village of Aldborough just outside of Boroughbridge. 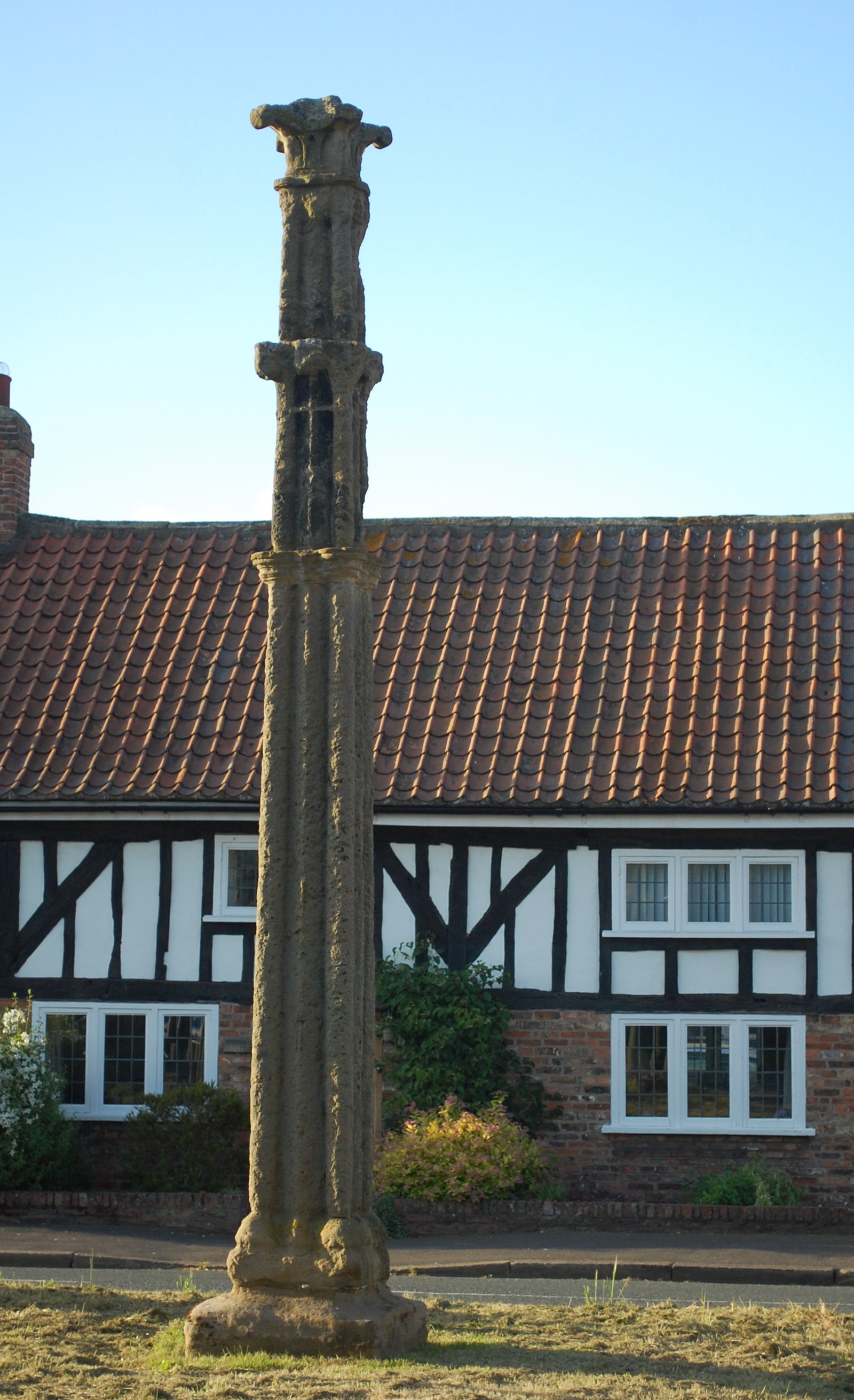 The Battle of Boroughbridge was in 1322 and was important for two reasons: (i) Sir Andrew de Harcla, King Edward II's commander, defeated Thomas, Earl of Lancaster, and his rebel barons, cementing the power of the Crown over the Earl of Lancaster, the second most powerful baron in the country and perhaps at the time the richer person; (ii) it was the first battle to show the power of the longbow in battle, as well as mainly using foot soldiers rather than mounted warriors.  While the former point is generally the one cited in history books, it is the success of using archers that perhaps had the greater impact for England with one of the first great battles in the English memory bank - the Battle of Crécy - happening just over 20 years later in 1346.

The walk is more of an amble than a walk as it is very short, so I actually augmented it by doing it in two stages.  The first part was a walk along the north side of the Ure, where Harcla was positioned and then I drove a short distance and walked along the south bank and towards Aldborough, where the memorial is located.

For the first section, you go over the bridge in Boroughbridge, and just before you get to the roundabout, park your car in a car park just by the river.  From here, you walk back towards the bridge and then pause to look at the bridge as this is the position of the original wooden bridge, even if it is not the actual one; we are standing where Sir Andrew de Harcla would have stationed his pikemen, mounted knights and perhaps 2000 archers to stop less than 1000 attempting to come across.

On the opposite side of the road and just before you go over the bridge, you cross over and go through a gate onto Milby Island.  Milby Island is not a natural island, but was created when a short strech of canal was built to by-pass the Ure at this stage, carving out a section of the earth to become Milby Island.

It is a short pleasant stroll amongst the sycamores and hawthorns to Milby Lock at the tip of the island, however before you get there and about 500 yards in, you can look across to a beech tree that I reckon is the line across which Lancaster tried to ford the Ure.  The usual local historical view is that the point at which Lancaster and his troops tried to ford the River Ure is further on at the tip of Milby Island, which then of course was not an island; as you can see from the photo, the anglers were out in force having a fishing match this Sunday morning.  I crossed over the lock and walked a short bit further along the river and looked back at the Ure and Milby Lock before retracing my steps.  For variety, I then walked along the north side of Milby Island beside the canal that was dark and shaded in the sunny light, and then after passing several narrow boats, walked up some steps and came out opposite the car park.  A motor boat had passed by in the canal, chugging along to the lock, while the narrow boats here were a little bit bedraggled compared to the brighter and happier looking ones that I had seen recently at Ripon. 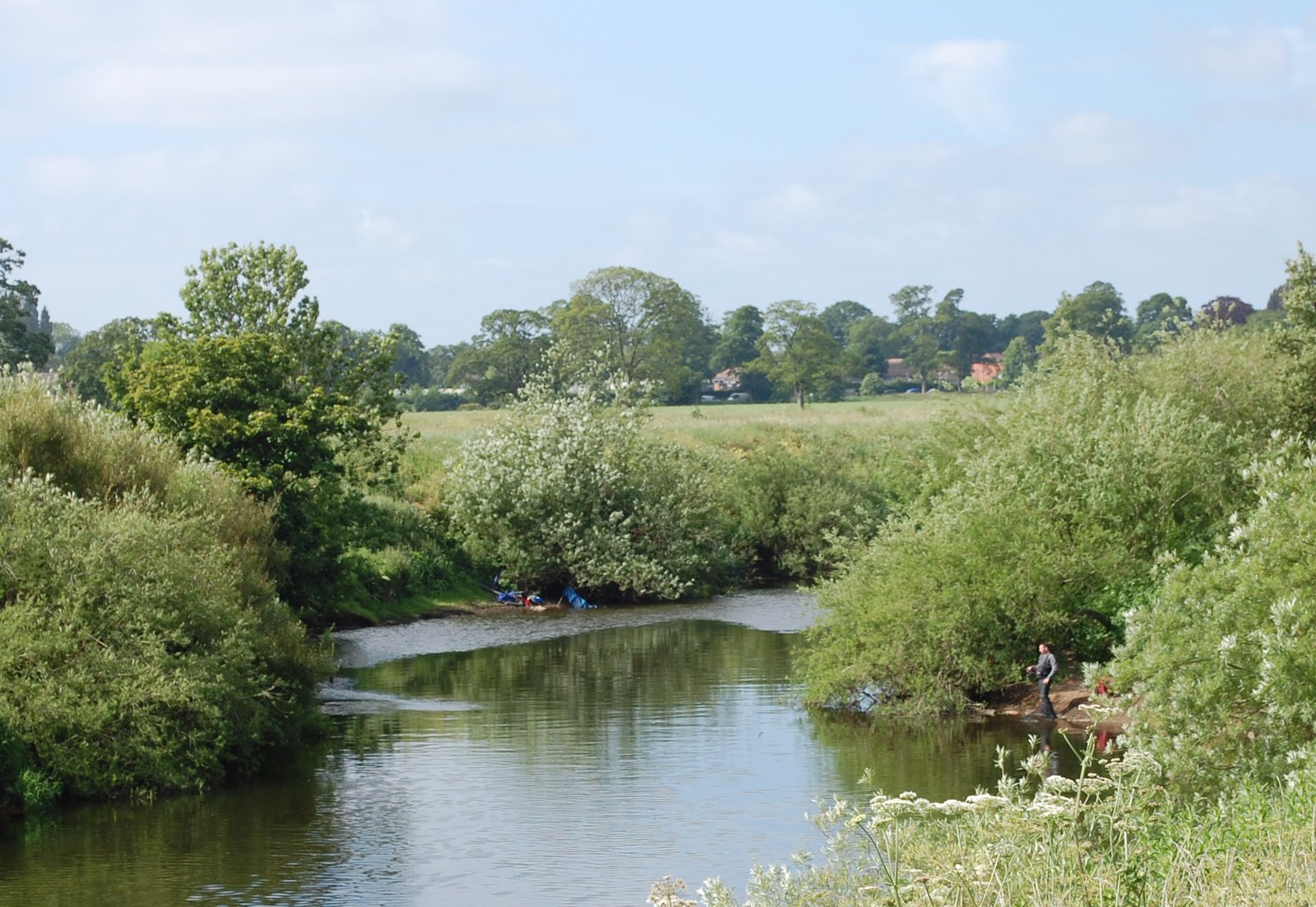 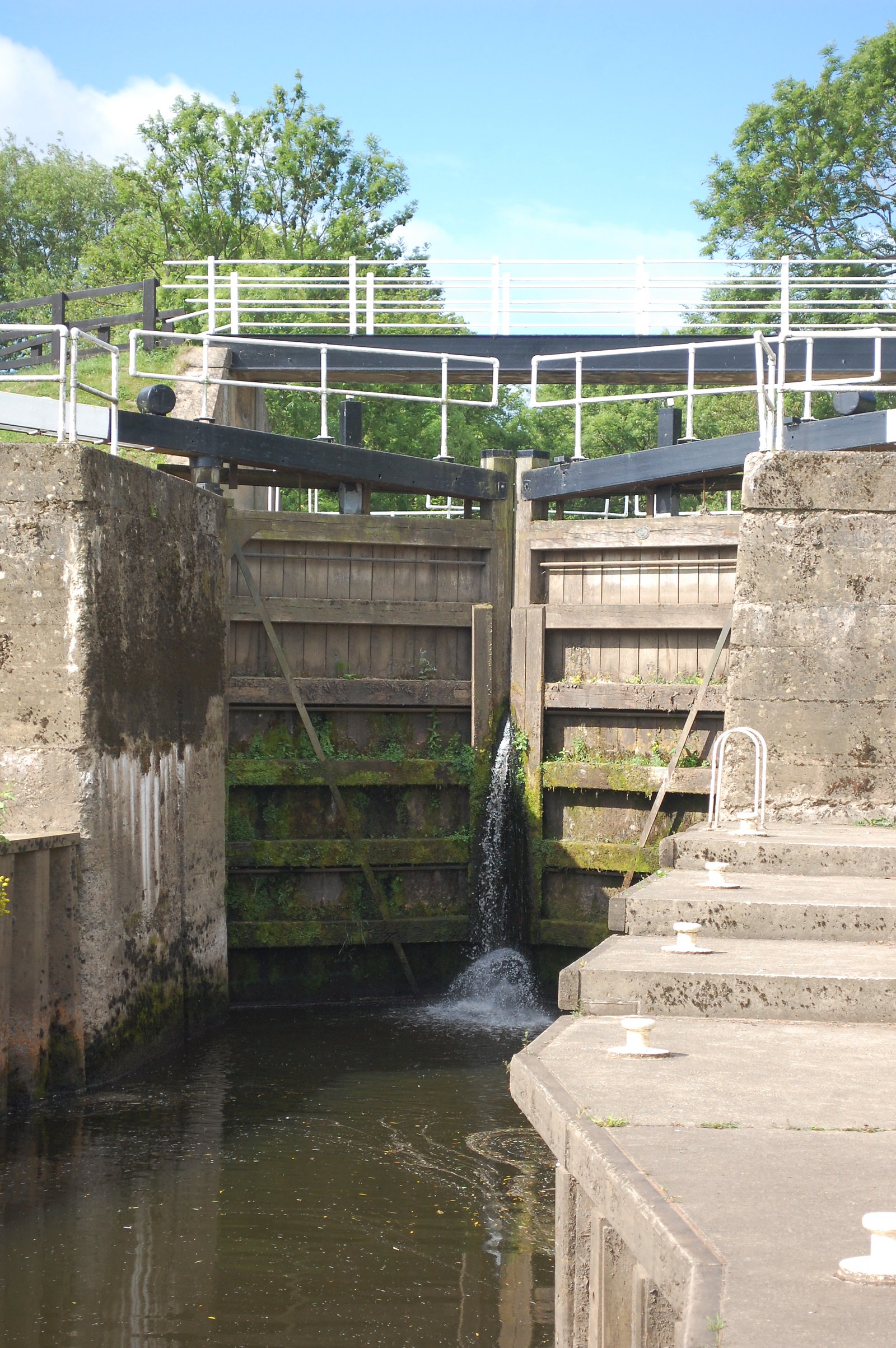 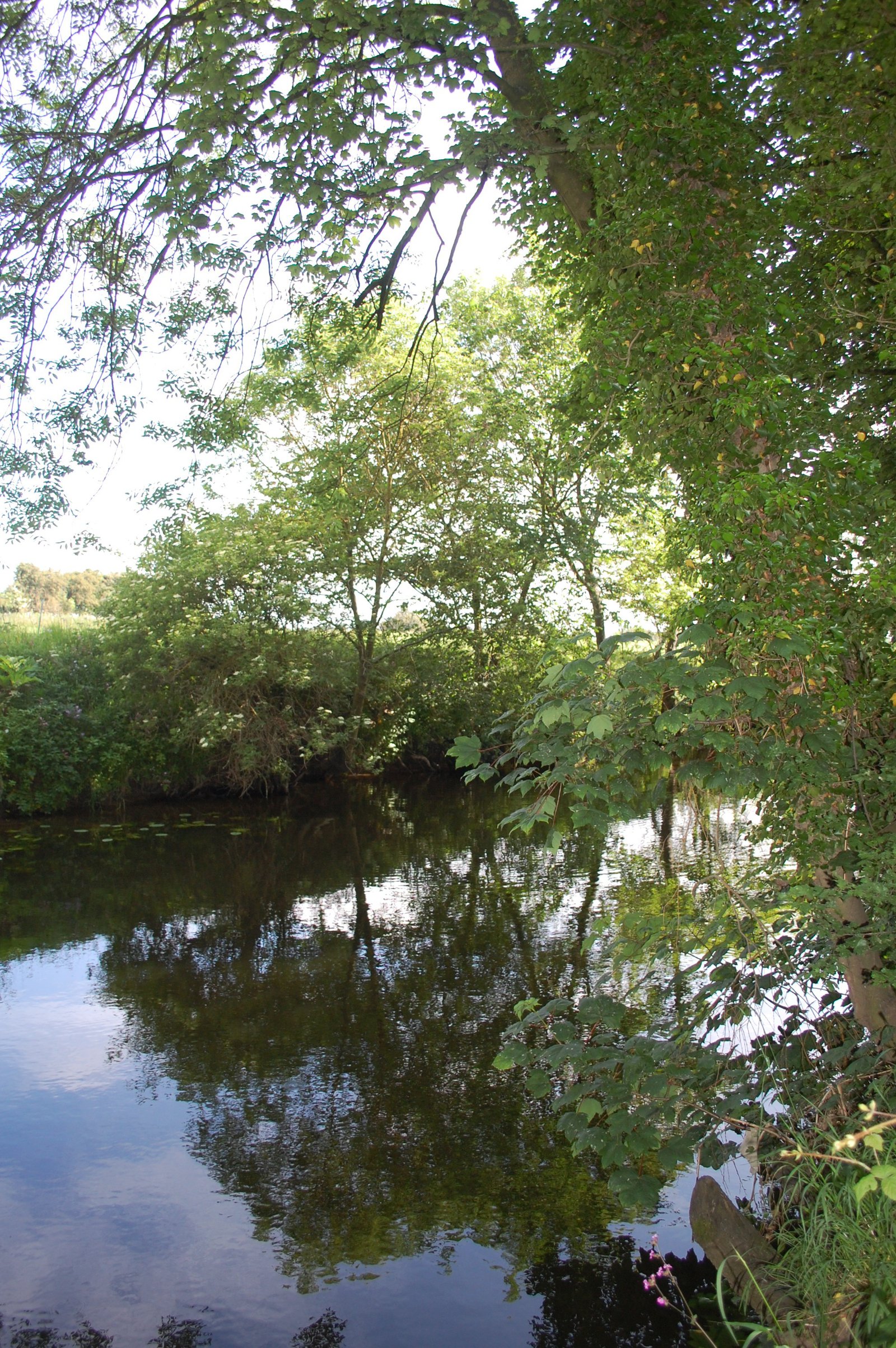 For the second part of the walk, I drove to a gate beside Boroughbridge Primary School and walked down to beside the river and then walked along the Ure and into Aldborough on top of the local flood levee.  At the start of the walk, you can walk down to the river's edge and try and work out for yourself where Lancaster and his troops would have attempted to cross the River Ure.  My favourite point is somewhere between the copper beech tree and the tip of Milby Island, however we will never know for sure. 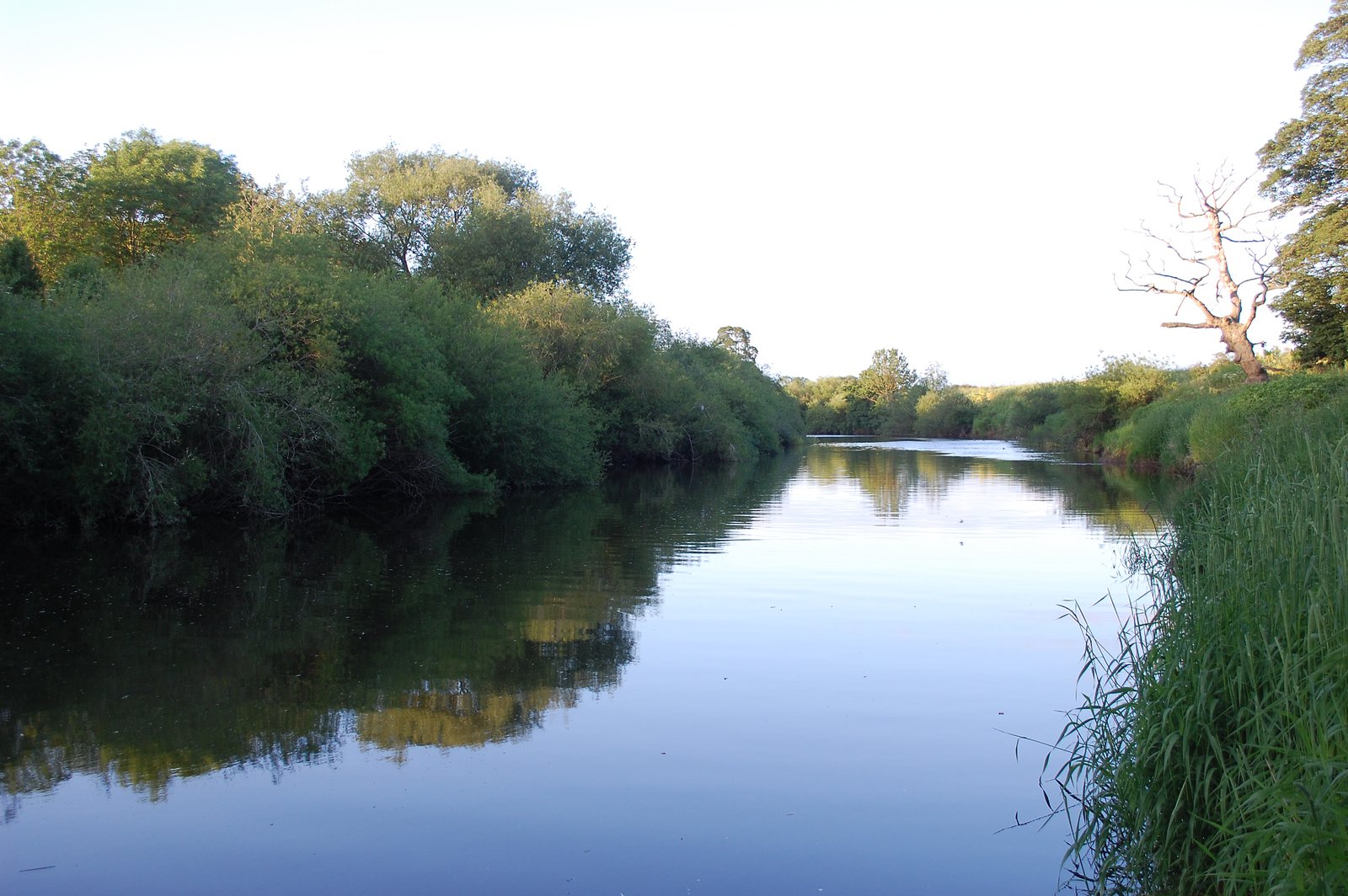 In Aldborough itself and by the village hall, you can see the original memorial to the Battle of Boroughbridge that used to stand in Boroughbridge.  As I walked, I was amazed to be the only person out and about for a walk here, but the sand martins were flying around, as was an oystercatcher.  The fields were beginning to turn to a golden yellow and the elder flower were out in the lane coming into Aldborough - I must collect some and make some elderflower cordial.

The backdrop to the Battle of Boroughbridge was fairly simple - Thomas Plantagenet, Earl of Lancaster, who was also the King's cousin, had fallen out with King Edward II because of his weak rule (he was eventually deposed by his wife Isabella in 1327) and his favouritism for Piers Gaveston at Court.  In fact, Piers Gaveston had been granted land all over England including the Manor of Aldborough just beside Boroughbridge.  Along with many others, Lancaster had forced King Edward II to banish Piers Gaveston in 1311, but he returned from France in 1312, so Lancaster and his army attacked King Edward and Gaveston at Newcastle, defeated them and the King went south to raise and army while Gaveston fled to Scarborough, where he surrendered to the Earl of Pembroke.  On his journey with Pembroke, however, he was captured at Oxford by the Earl of Warwick and taken to Warwick Castle; then on 19 June 1312, he was taken to Blacklow Hill and murdered.  King Edward II swore vengeance on all those implicated in Gaveston's murder, which included primarily his cousin, the Earl of Lancaster, who was also the second most powerful person within England.

In the period from 1312 to 1322, the differences between Lancaster and the Crown widened as King Edward led a failed campaign against Scotland in 1319.  In November 1321, Lancaster mustered a large force at Doncaster and pushed south, however Edward crossed the River Severn and succeeded in obtaining the surrender of several marcher lords and then one of Lancaster key retainers, Robert de Holland, switched sides to the Crown.  King Edward advanced northwards and after a stand-off at Burton Bridge on 10 March 1322, he was forced to retreat towards Dunstanburgh Castle in Northumberland.  Before he get get there, however, Sir Andrew de Harcla coming from the north was to block Lancaster's retreat northwards at Boroughbridge. 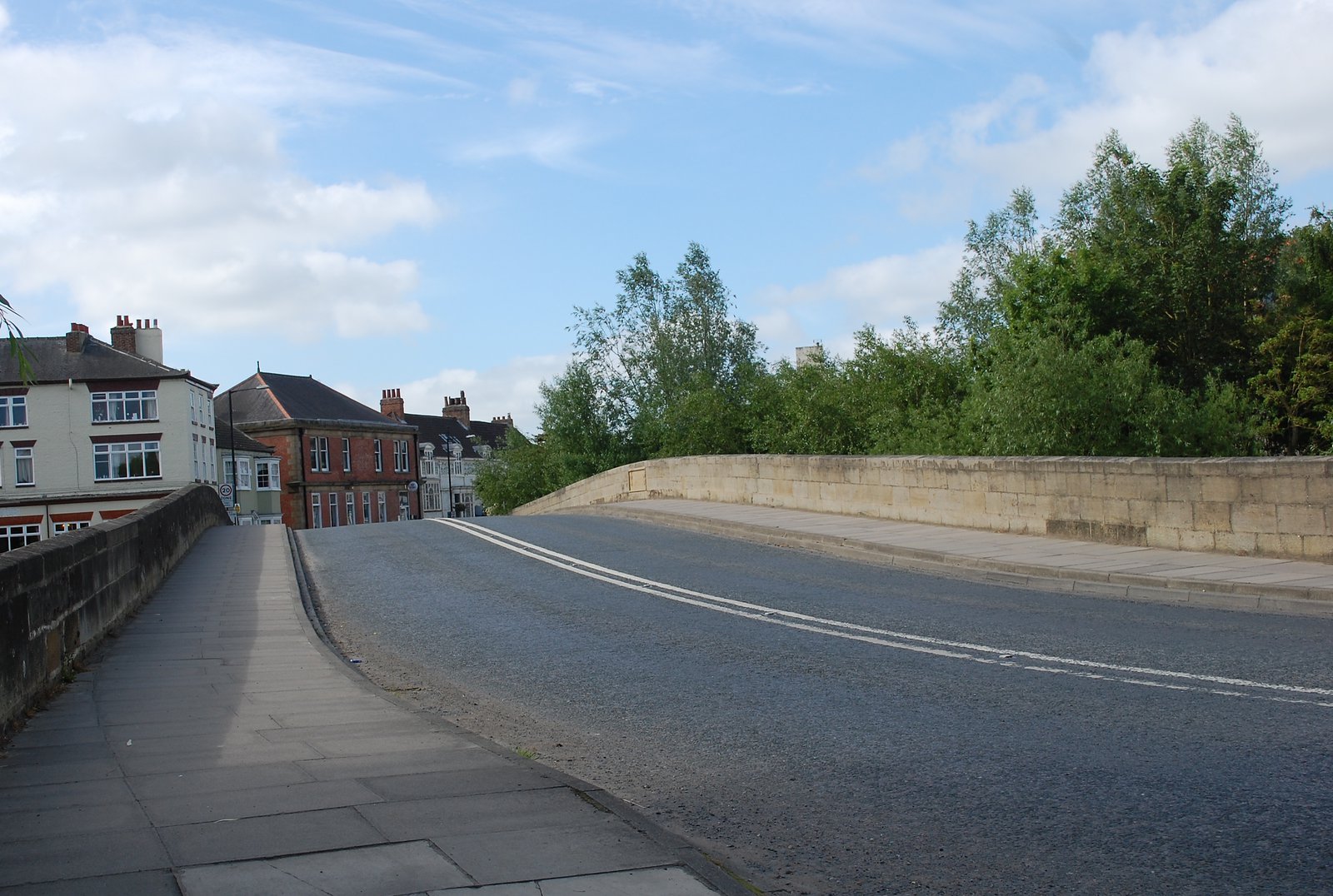 Having spent the night in Ripon, Harcla marched his force towards Boroughbridge, where they set themselves up on the north side of the River Ure.  Harcla put pikemen and knights on the north end of the bridge, which in those days was narrower and made from wood but still at the same location as today.  Then somewhere between half a mile and a mile downriver, Harcla positioned pikemen in a schiltron formation at a ford across the River Ure.  Both positions were supplemented by archers beside each crossing.  In total, Harcla is recorded as having 4,000 men, but it is likely that this figure has been inflated over time.

Lancaster's plan was to attack with his smaller force using cavalry to cross the bridge, however it is unlikely that mounted cavalry could have crossed the bridge in numbers.  Sensing this, many of his men disappeared in the night and come the morning, Lancaster was quickly defeated and surrendered.  Lancaster was taken to Pontefract Castle and executed, together with many of his followers.  King Edward remained very unpopular, was usurped by his wife and finally killed in 1327 probably by suffocation although the more popular account is that of Thomas de la Moore that records:

"On the night of 11 October while lying on a bed [the king] was suddenly seized and, while a great mattress... weighed him down and suffocated him, a plumber's iron, heated intensely hot, was introduced through a tube into his anus so that it burned the inner portions beyond the intestines."