I have always bought our hot cross buns from the baker or the supermarket, which just seems a bit too lazy really, so I thought I would have a bash at making them myself this year.

Hot cross buns grew out of traditional Lenten yeast buns that started being popular in England in the mediaeval times, when these small enriched bread buns were served at the end of Lent to be eaten while drinking a good quantity of celebratory wine.  They became popular throughout Lent during the Elizabethan times, when wealthier people loved to show-off their money and sophistication by spicing these buns up with expensive, rare and luxurious spices and dried fruits that were really hard to come by during the cold, winter months.

It had also been traditional in the mediaeval period to mark the loaves with a cross cut into the top of the buns to ward off evil spirits and so encourage the bread to rise.  This was abandoned for most of Lent during the Reformation (in the 17th Century) when such behaviour was regarded as too popish, however they were still made with crosses on them for Good Friday in token of the crucifixion, so the tradition did not completely die out.

Because of the wide availability of storecupboard staples like spices and dried fruits nowadays, we have all lost the excitement and awe that used to arise from cooking with these things to enrich your breads and cakes, while the fact that they seem to start getting into the shops immediately Christmas is past means that we are inured to the religious significance of hot cross buns as a Lenten tradition.

I really hate this drifting of traditions by the supermarkets with Easter eggs and buns being available for months before Lent and Christmas getting into stores from somewhere towards the end of the summer holidays.

These home-made hot cross buns have a lovely mild spiciness unlike the heavy-handed flavours of the high street bakers, while the texture is great; they have a soft, silky mouth-feel - it's a bit like the difference between a feather and a foam pillow, where the supermarkets' hot cross buns are the chewy, rubbery foam pillow.

For the hot cross buns:

For the pastry crosses:

Tip: you can cheat by using 50g / 2oz shortcrust pastry from the freezer section in a local shop, which you then cut into narrow strips, or add enough water to make it runny enough so that it can be piped as below

Stage one - making the dough

Pour the organic milk and free–range egg into the bowl of the breadmaker.  Reverse the order if your bread machine tells you so to do.  Sprinkle over the white bread flour, ensuring that it covers the liquid.  Add Steenbergs organic Fairtrade mixed spice and the organic cinnamon powder.  Then place the sea salt, caster sugar and butter in separate corners of the bread pan.  Finally, make a small indent in the centre of the flour and put the yeast into there.

Set the bread machine to the dough setting; use the basic raisin dough setting if that option is available on your machine.  Press start.   Lightly grease 2 sheets of baking paper.

When the machine beeps or 5 minutes before the end of the kneading period, add the organic mixed peel, organic currants and organic sultanas. 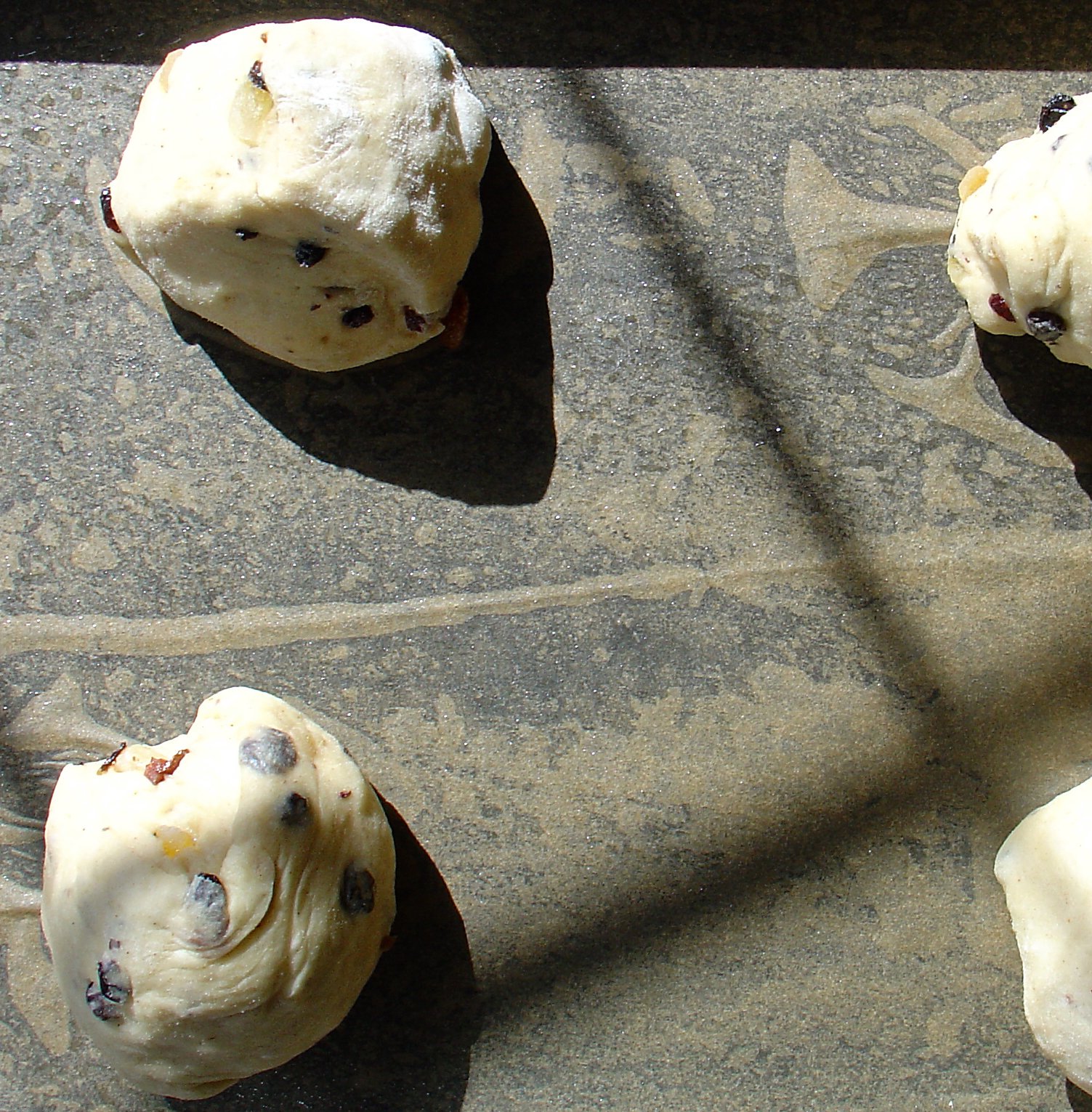 When the dough is made, remove the dough from the bowl and place it on a lightly floured surface.  Knock it back gently, then divide into 12 pieces.  Cup each piece between your hands and shape into a ball.  Place these balls on the prepared greased baking sheets, and cover with oiled clear film, and leave for 30 – 45 minutes or until it has doubled in size.

Make the pastry crosses either cheating by using some frozen shortcrust pastry cut into strips or making your own pastry.  In a bowl, rub together the plain flour and butter until the mixture resembles breadcrumbs.  Bind together with a little bit of water to make a soft pastry which can be piped.  Spoon the pastry into a piping bag fitted with a plain nozzle and pipe a cross onto each bun.

If you want to be more "ye olde breadmaker" about it, you could cut into the buns rather than put on the pastry crosses.  You do this by cutting into each pastry ball through the surface by not all the way down.

Bake the hot cross buns for 15 – 18 minutes, or until golden brown.

While the hot cross buns are in the oven, heat the milk and sugar together in a small pan to make the glaze.  Stir thoroughly until the sugar has dissolved.  Brush the glaze over the top of the baked hot cross buns, turn them onto a wire rack to cool, then serve immediately or leave to cool, reheating them when you want to eat them. 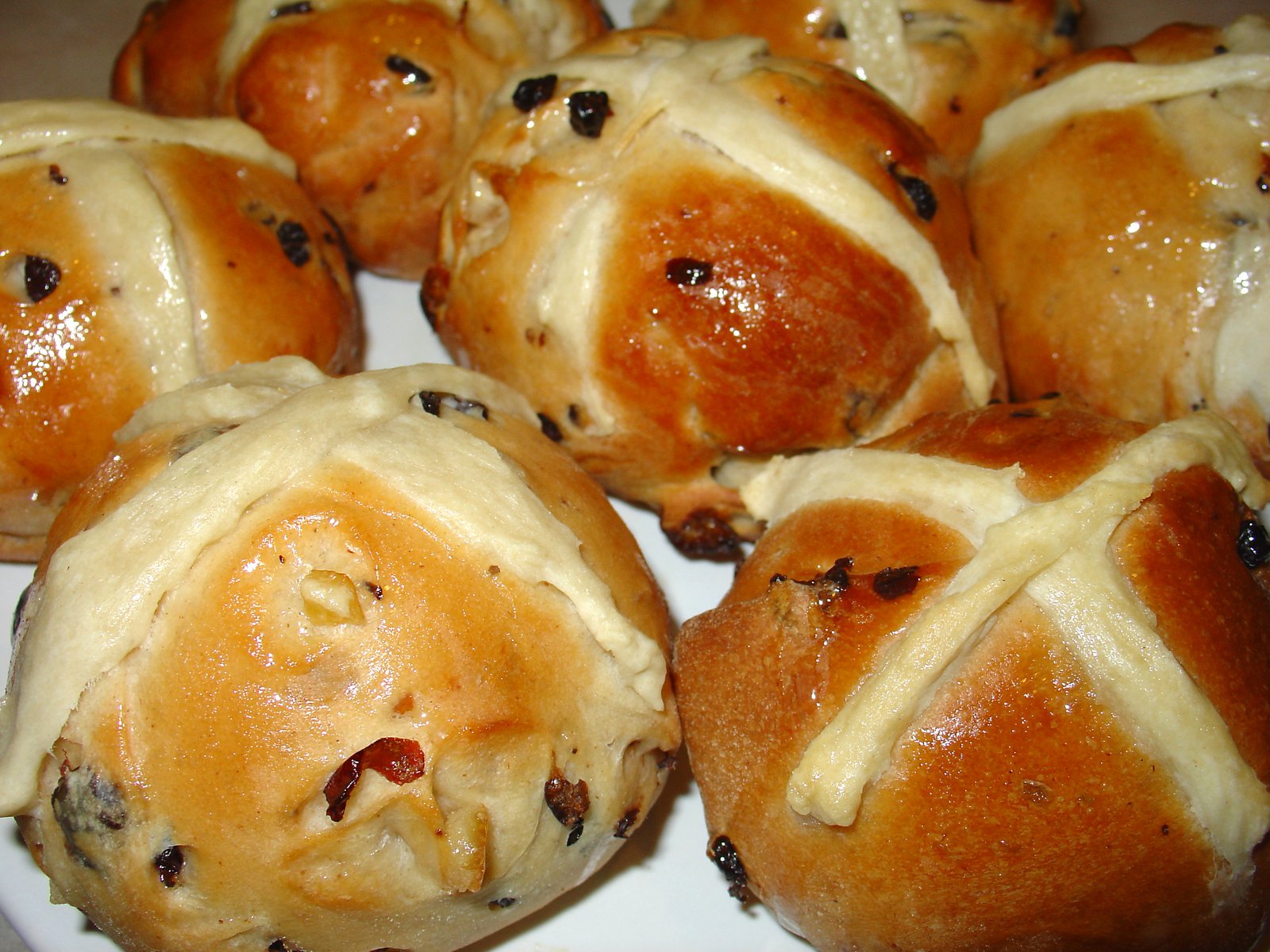 This recipe and some of the spiel was based on a recipe from a great book on baking bread, called "Bread" by Christine Ingram and Jennie Shapter.