I bought some delicious venison steaks and diced venison the other day from Hornby Castle in North Yorkshire.  Since then, we have been experimenting with a couple of different casseroles, and have come up with two different ones - a traditional richly marinaded and cooked venison and a lighter and meatier venison stew in ale.

Roger and Julia Clutterbuck farm at Hornby Castle, which is one of those quintessentially English old country houses.  Hornby Castle dates back to the fourteenth century and has been rebuilt several times of the centuries including a major overhaul in the 1760s by John Carr.  The mediaeval St. Quintins Tower was knocked down in 1927 and the John Carr East Range was demolished in the 1930s.  The Clutterbucks bought the estate in the 1930s from the estate of the Duke of Leeds as that old English family slowly dissipated.

Hornby Castle is an 850 acre estate, comprising about 350 acres arable and the remainder grass.  On some of the grass, Roger introduced red deer and bison during 2004-5; these are processed as cuts of meat or into sausages, burgers and casseroles.  The venison is butchered by Yorkshire Game and Masham Sausages make their venison sausages, while Langthornes processes the bison and makes the burgers.  Julia is in charge of developing recipes and marketing the meat, which is a real hidden gem that more people simply just need to know about.

Truly enterprising executive chefs really should get this on to their radar screens, but while I suspect they will continue to miss out.  Anyone who can get to Hornby Castle should contact Julia Clutterbuck (01748 811 579 or email julia@parklandrange.co.uk) and get some of their bison and venison.  It is best to ring beforehand as there is no shop and it is a case of when it's there, it's there, so you cannot be guaranteed that what you are after is actually in their freezer.

I bought some venison recently to fry up as simple steaks and also some diced venison for a casserole.  The Haunch Steaks come vacuum packed in pairs; I purchased two packs to feed the four hungry Steenberg mouths at £5.32 and £4.94 at £21.46 per kilo.

I lightly seasoned the Haunch Steaks with salt and pepper, then fried them in sunflower oil for about 2 minutes on each side.  I put the cooked steaks in a warm oven, then fried off the juices in a couple of tablespoons of rosé wine thickened with a knob of unsalted butter.  This light rosé jus was drizzled over the venison steaks and served with new potatoes and steamed broccoli and fine beans. 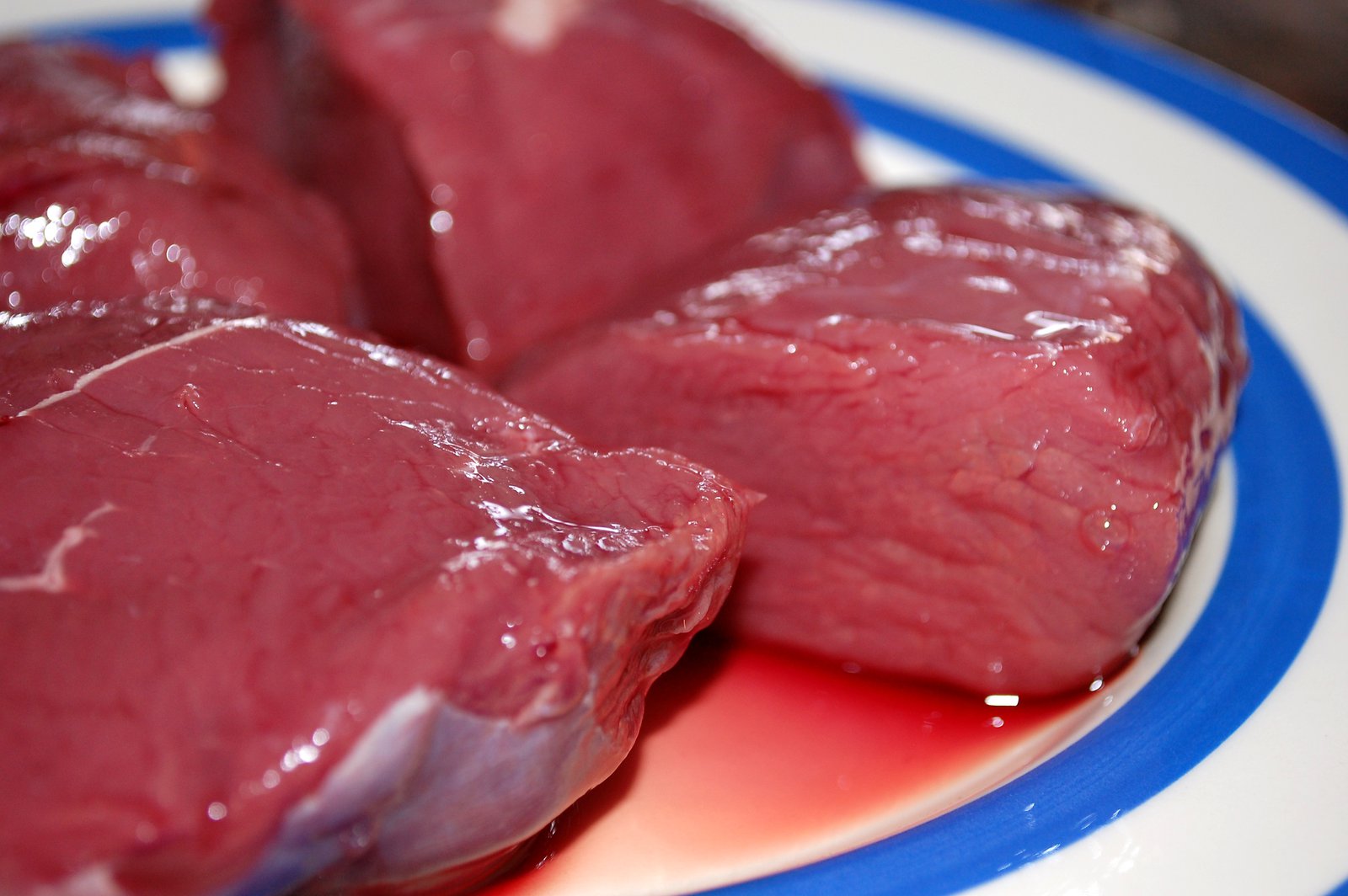 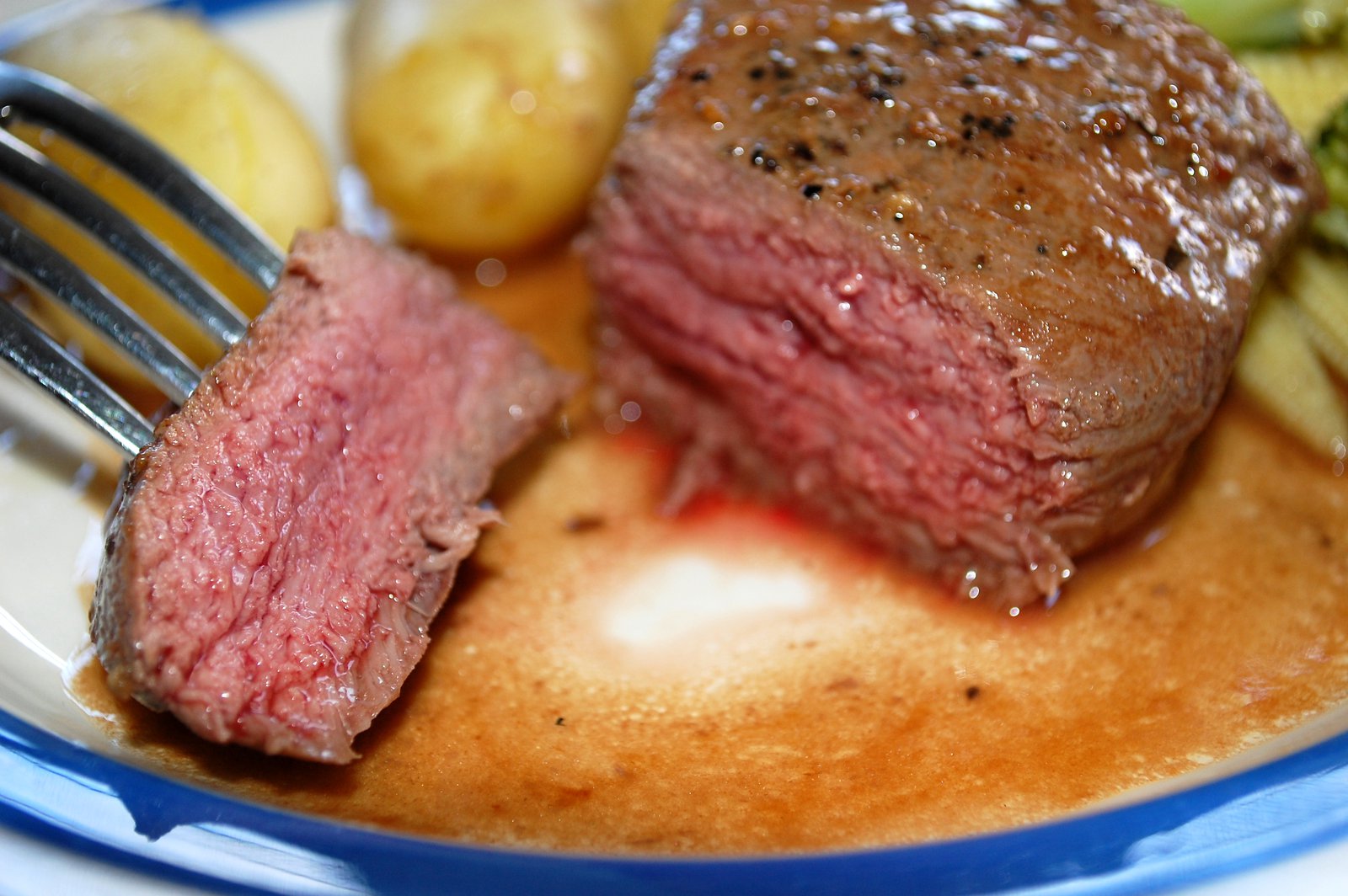 Hornby Castle venison has a deliciously meaty flavour and a really succulent texture that has a good lean bite, without becoming to chewy.  Because the red deer is butchered at 18 to 24 months old, there is none of that overly strong gaminess and excess richness that often comes with venison and that can make it almost overpowering.  Jay loved it so much he has already asked me to make it again - we will see, but a meal the kids want more of is always a blessing.

This weekend, I made a Classic Venison Casserole.  This is quite a time consuming process involving overnight marinading of the venison in a lot of red wine (I used Hermitage 1995 - Cuvee Marquise de la Tourette which was a treat), followed by slowly cooking the venison in your oven for 3 hours.  The result is worth the effort - a classically, rich venison taste in a deep, dark and rich red wine sauce with meat that is so soft and delicate.  We ate it with a celeriac- potato mash and purple sprouting broccoli, which allows you to mop the delicious red wine sauce up in the mash, which gives you a lovely comforting feeling.

I have to admit, however, that the need to marinade the venison means it might put you off wanting to make this recipe regularly, while I find the concept of throwing away most of the marinade ingredients horribly wasteful, so I have also created a quicker and thrifty way to cook the venison.  But unlike what Hugh Fearnley-Whittingstall says, the venison does not come out dry and pickled from the long marinade, or it did not for us; perhaps, this says more about the venison and wine that he used when he has tried marinading venison overnight.  I will explain my simpler venison casserole in my next blog post.

Cut the venison into 3cm (1 inch) cubes and place these into a dish.  Pour over the red wine, then add the rest of the ingredients for the marinade as you prepare them.  Give it all a good stir, cover, then leave overnight in the fridge or a cool place. 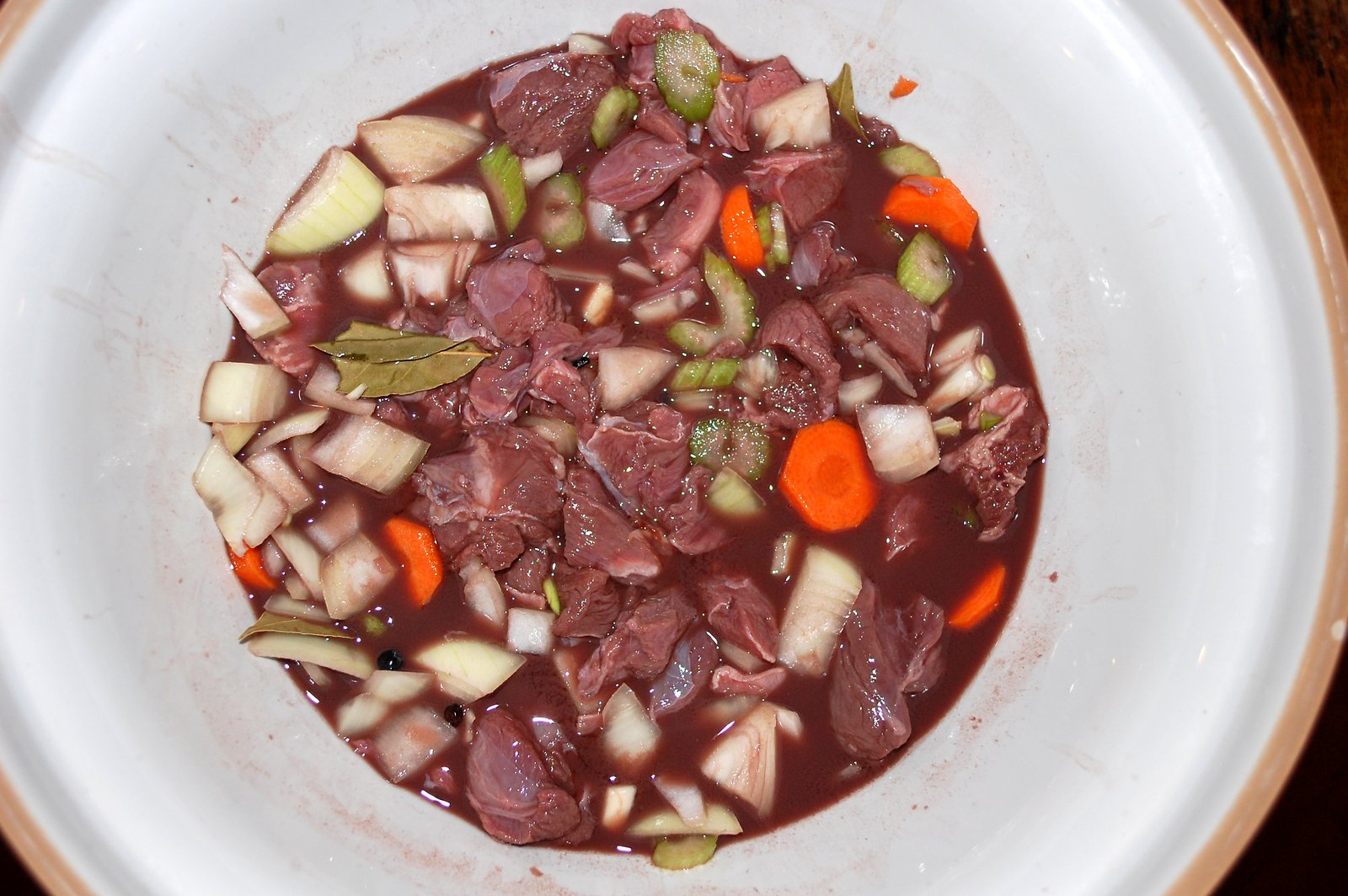 The next day, heat the oven to 170C/ 340F.   Next lift out the cubes of venison and pat them dry with kitchen paper. Strain the marinade and keep flavoured liquid to the side for later.

Heat the oil in a heavy saucepan and brown the venison, a few at a time.  Put these into a casserole dish.  When you have finished browing the venison, pour half the marinade into the pan and scrape the pan to get all the fried pieces up and add this all to the casserole dish. 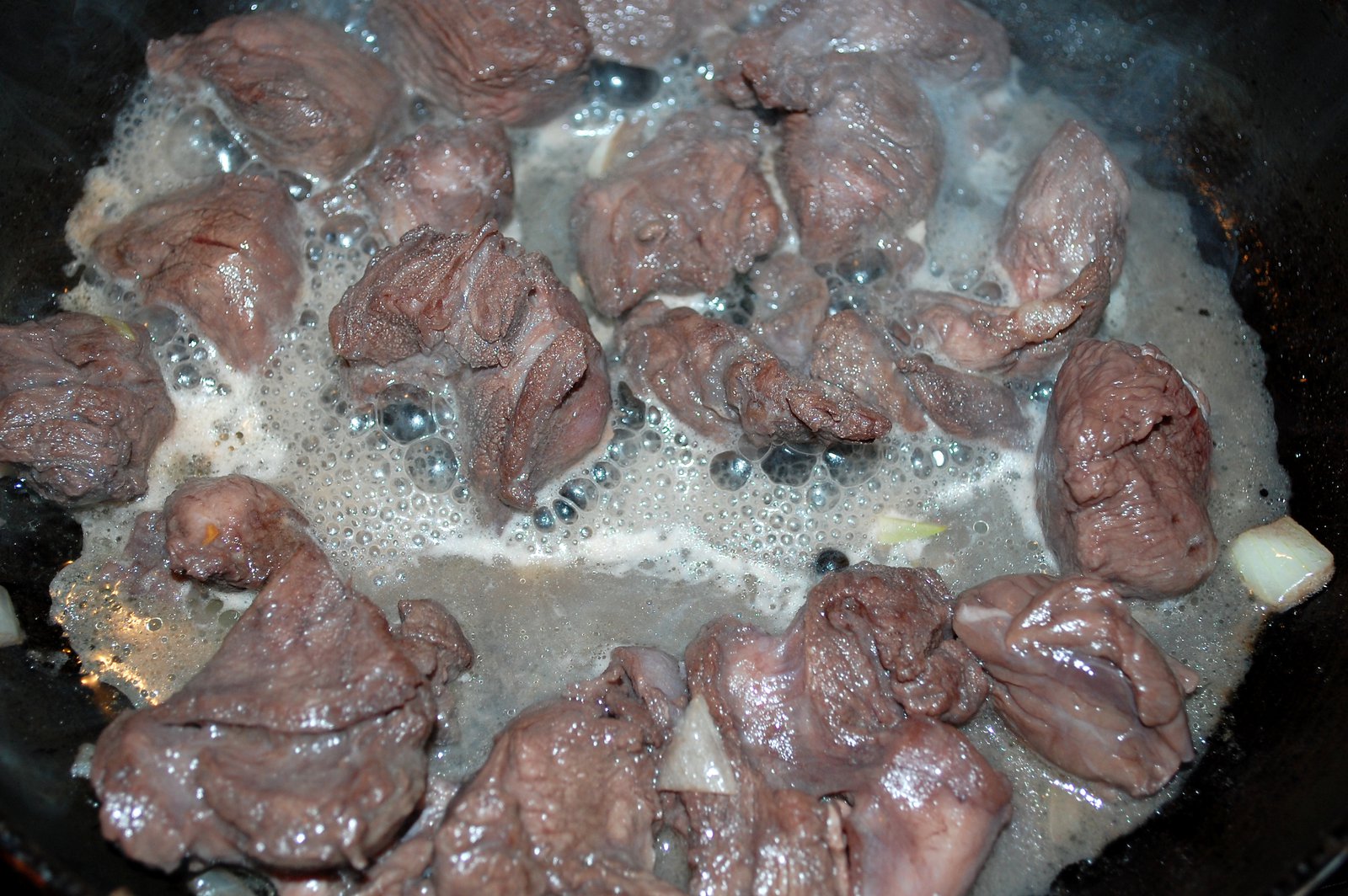 In a seperate pan, melt the butter and fry the onions and garlic until translucent and place into the casserole, then cook the mushrooms for two minutes before placing these into the casserole. Stir in the flour and cook for 30 seconds, slowly adding the marinade stirring to prevent any lumps forming.

Remove from the heat, then add the rest of the marinade and the stock and heat until boiling.  Add boiling stock to the casserole, then put in the redcurrant jelly and season with salt and black pepper.

Cover the casserole and cook for two hours, checking it does not dry out and in the last half an hour taste and adjust the seasoning, if needed. 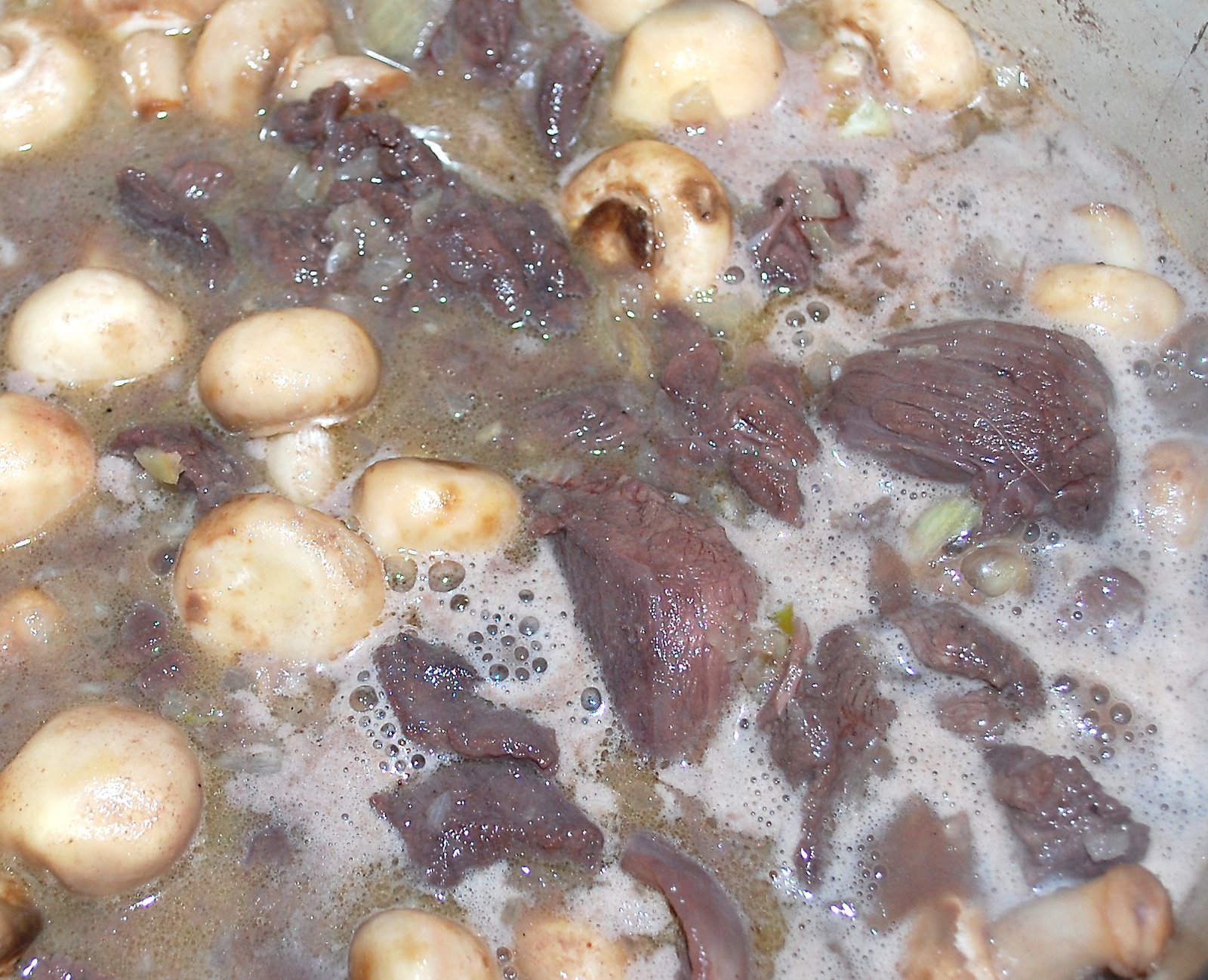 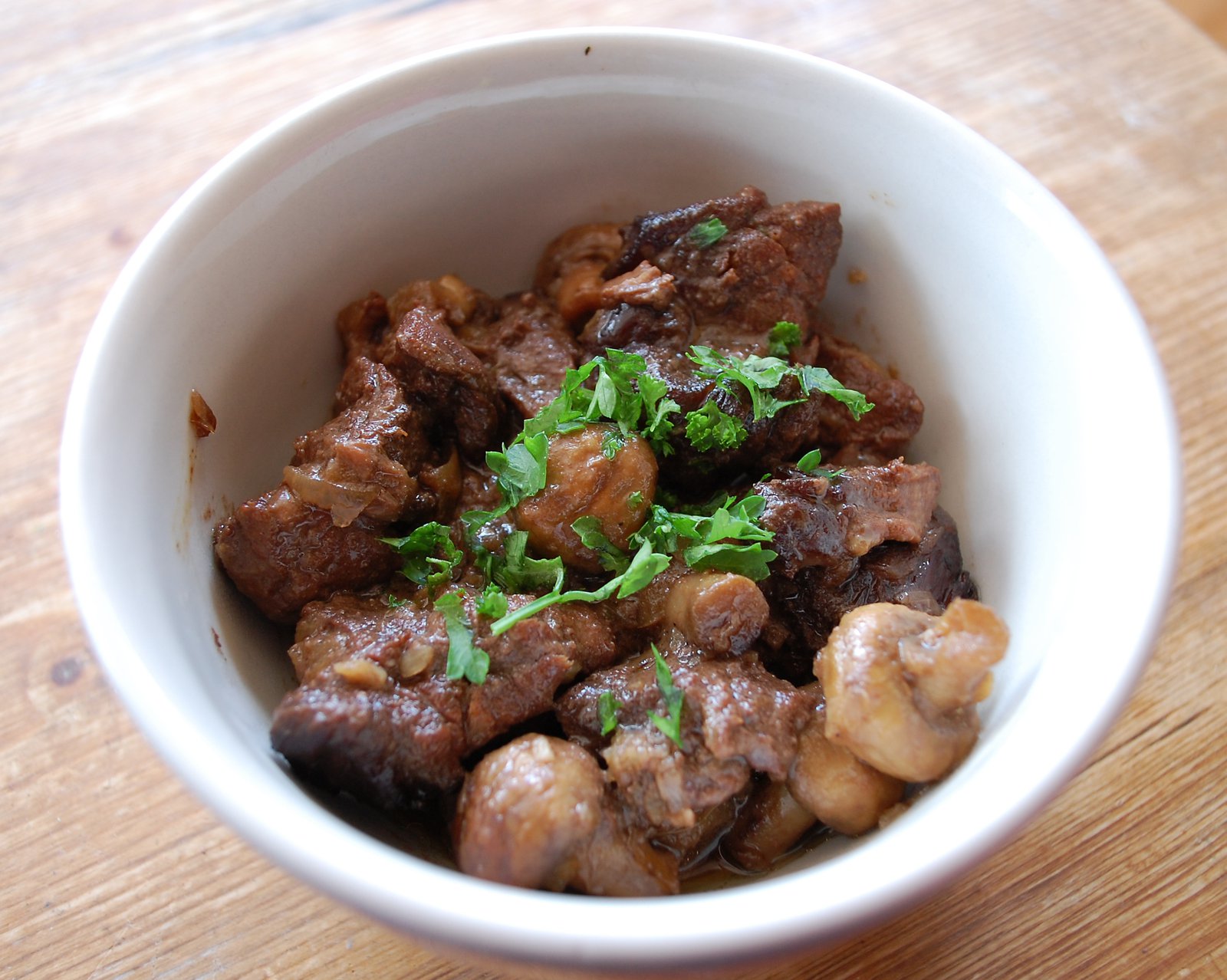