For someone with little spirituality, I spent much of last Sunday at religious events.  Both of them were for Ripon Cathedral Choir School, which is celebrating 50 years since its foundation by Ripon Cathedral.  Proof that little old Ripon can be a great, visionary place. 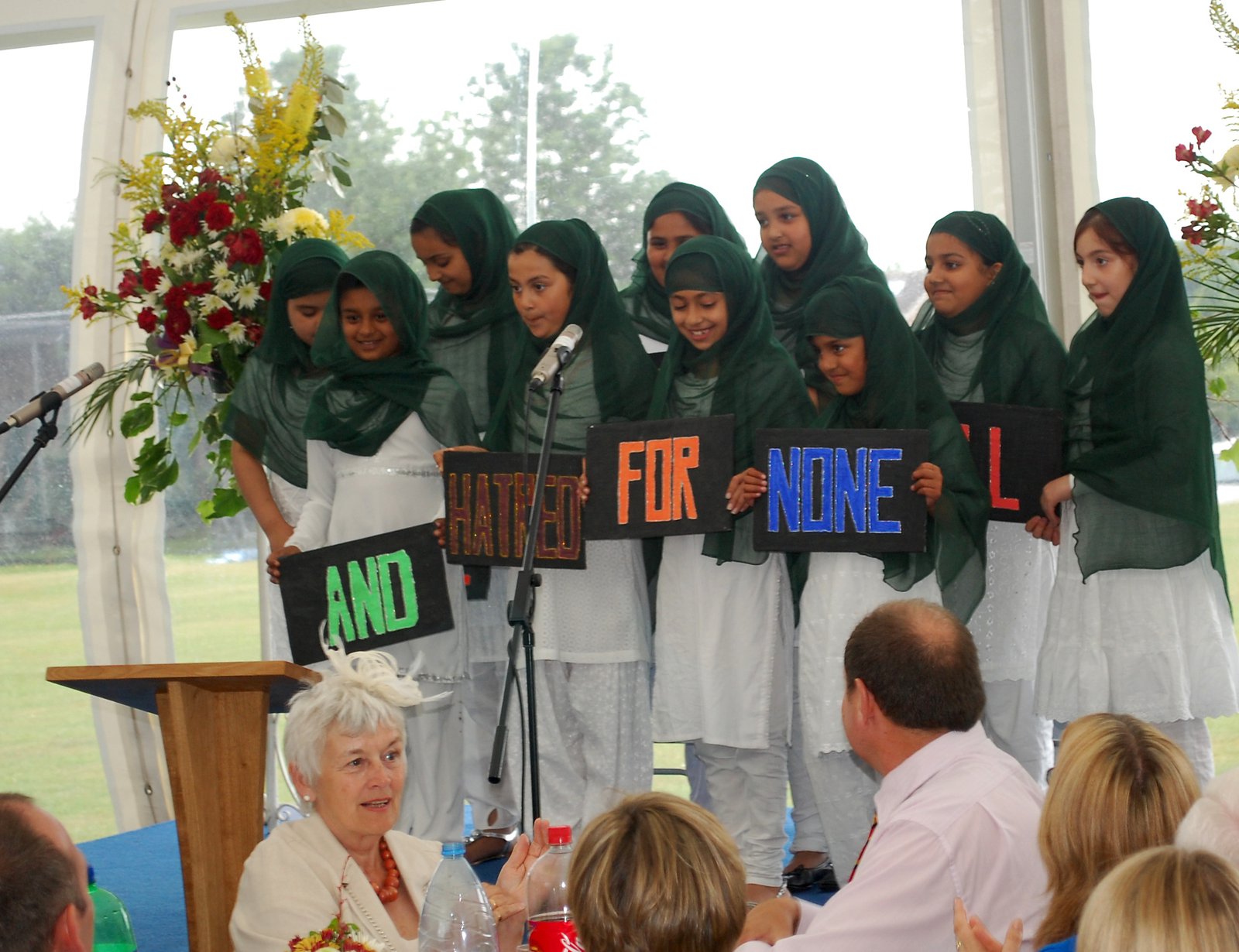 The first was a really special event called "Building Bridges", which was a curry lunch together with members of the Ahmadiyya Muslim Community of Bradford (note i).  I have to admit to not having a clue what this was going to be like, so was gobsmacked to find a packed marquee, including local Mayors from Bradford, Ripon and Pateley Bridge as well as at least 50 from the Ahmadiyya Muslim Community and over 100 from Ripon Cathedral Choir School, including the Dean and the Canon in Residence at Ripon Cathedral and lots of children.

Links to the Ahmadiyya Muslim Community in Bradford were forged by the former headmistress, Tish Burton, and are a great and growing part of the School's ethos.  I am not here to preach or even explain - you can find all this out at www.alislam.org and www.mta.tv - rather I simply want to say that peace, understanding and integration can best be solved through meeting together over good hospitality and talking together in the right mental space.  As a result, I talked about football and cricket, while have blagged some of the delicious recipes (which I will hopefully be emailed), and we have agreed that the Steenberg family and at least one other family will visit their mosque in Bradford during the summer holidays. 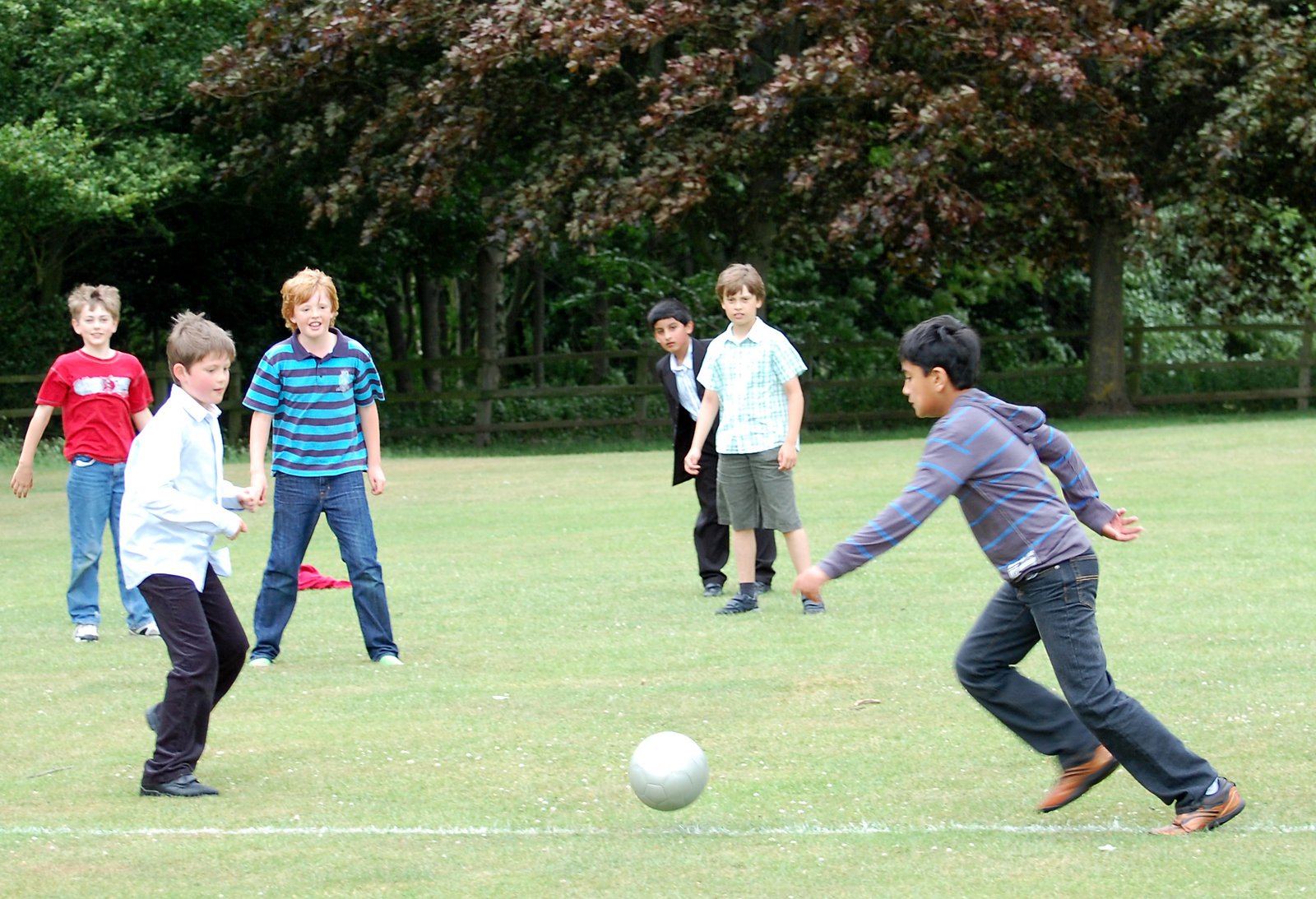 My enduring image of the lunch is actually not the food, although it was delicious, nor the speeches by Dr Iqbal and the Dean of Ripon Cathedral, which were both poignant, but of the children playing outside the marquee - the boys in a fully integrated football game and the girls all on the zip wire; my son says they were really good forwards as well as decent goalkeepers.  No racial barriers even considered.  If our children can have open eyes and have no prejudice then the world will be a better place.  It brings to mind possibly one of my top ten songs - Youssou N'Dour's song with Neneh Cherry called "7 Seconds" (note ii) and the lines:

"And when a child is born into this world

It has no concept

Of the tone the skin it's living in

It's not a second

Which says to me that no child is born with prejudice and that it takes time for that to be instilled into them.  But that loop can be broken, and will be, if parents and adults prevent it from creeping into their psyche.  Events like Building Bridges, the World Cup (and football generally) and music showcase how all people are one and the same.

The second event was Choral Evensong in Ripon Cathedral sung by the joint boys' and girls' choirs of Ripon Cathedral Choir School.  This was Ripon Cathedral Choir School at its musical excellence, with a full church and the beautiful sounds of a sung evensong, with the senior brass group playing Telemann's "La Réjouissance" as the Choir and Clergy processed, finishing with the eerily spiritual Dismissal echoing out of the South Transept.  I found the complex musicality of the Anthem that combined words from Ecclesiasticus 1 with Psalm 119 to music by Philip Moore truly magnificent and baroque.

I was also intrigued by the Old Testament Reading as read by the current Headmaster, Christopher McDade, poignant as it captured my thoughts from within the Northern Thornborough Henge the other day:

"Some of them have left behind a name, so that others declare their praise.  But of others there is no memory: they have perished as though they never existed; they have become as though they had never been born, they and their children after them.  But these also were godly men, whose righteous deeds have not been forgotten; their wealth will remain with their descendants, and their inheritance with their children's children...Their offspring will continue forever, and their glory will never be blotted out.  Their bodies are buried in peace, but their name lives on generation after generation.  The assembly declares their wisdom, and the congregation declares their praise." Ecclesiaticus 44

(i) Ahmadiyya Muslims are a minority and integrative strand of Islam that believe in peace.  They suffer persecution within Islam itself due to their peaceful and integrative outlook as well as their belief that their own founder, Mirza Ghulam Ahmad, was a prophet since the rest of Islam believes that Muhammad was the last prophet.  In May 2010, about 100 of their believers were killed in two mosques Lahore by the Taliban.

(ii) As an aside, I remember watching this video almost daily on MTV when staying in Dublin, while working on the flotation of the Irish Permanent Building Society.  My love of this song and all Youssou N'Dour's works has grown every day since then and I never tire of N'Dour's style.