Pepper is the king of spices – it has had far reaching effects on trade, voyages of discovery, cultures and cuisines over the centuries.  To me, it embodies the wonder of spices – a distinctive, full-bodied flavour with an almost incredible influence on history.

Coming originally from the Wayanad plateau of Kerala in Southern India, pepper was probably the earliest spice known to man.  It swiftly became an item of luxury and a store of enormous value that was often used in payment of taxes or as currency.

Pepper was the Roman spice of choice (they preferred long pepper rather than the black pepper we tend to use) and was even used in ransom demands for the City of Rome.During the Middle Ages, pepper was the most important commodity traded between India and Europe.  Venice was founded off the pepper trade, dominating the overland spice routes to the Orient.

However, from about 1470 onwards, the Turks began to stop the overland trade routes east of the Mediterranean.  So Portuguese, Italian and Spanish explorers sailed west or south to reach the Orient.  As by-products, America was discovered, as was allspice (Jamaican pepper) and chilli pepper.

In Britain, peppercorns rents (literally rent payable in pepper) were introduced, becoming a real burden to many people.

When the wrecked Royal Navy ship, the Mary Rose, was raised from the sea bed in the early 1980s, nearly every sailor who went down with her in 1545 was found to have a little bag of peppercorns in his possession.  In 1973, Prince Charles visited Launceston to receive his feudal dues as Duke of Cornwall.  This included a pound of pepper as rent for the land on which Launceston Town and Guild Hall sits, and forms part of the tribute arising out of the grant of the town’s freedom by Richard, Earl of Cornwall, during the reign of King Henry III of England (1216 - 1272).When I worked as an accountant, I did some work for The York Waterworks and their head office was in an old building called Lendal Tower in York.  The annual rental for Lendal Tower is 1 peppercorn payable to the City of York; this 500-year lease was taken out in 1677, so still has many years to run.

On behalf of Portugal, Vasco da Gama won the race to find the sea route to India and the Spice islands via the Cape of Good Hope.  As a result, the Portuguese dominated the spice trade until the 18th century when Britain and the Netherlands took over, and then shared the trade in pepper and other spices, especially nutmeg and mace.

Pepper remains big business.  485,000 acres are given over to pepper growing, producing 325,000 tonnes of pepper every year.  The global export market is worth US$345 million every year.

What exactly is pepper?

Pepper is the dried berry of the pepper vine, Piper nigrum.  There are other peppers such as long pepper, cubeb pepper and pink pepper, but these come from different plants. 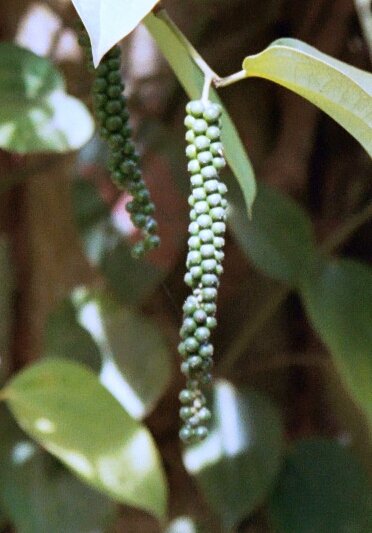 The pepper vine is a perennial climbing plant with smooth, woody stems and leathery leaves.  It grows a little bit like ivy (without being parasitic) up a host tree or pole.  The berries grow in long catkin-like clusters of bright green berries, ripening to yellow-orange and followed by bright red berries or fruits.  There are over 100 different varieties of pepper vine – Steenbergs organic pepper mainly comes from Krimunda, Panniyoor and Tellicherry Special Bold vines.

Pepper grows only in rich soil in a moist tropical climate with a pH of 4.5 to 6.0 ideal.  Propagation is normally by cuttings, although our organic pepper vines grow from wild-sown seeds.The vines do not produce a worthwhile crop until their 7th year, but they continue to bear a good crop for at least 15 years.  Each spike produces 30 -70 pepper berries; one vine produces around 3kg of fresh berries every year, yielding around 1kg of black pepper.  Every pepper spike is hand-picked by skilled pickers using tripod-like ladders.

What are the different types of pepper?

Green pepper is the youngest pepper berry.  Whole berries are picked by hand during September/October in India (2 - 3 months before picking berries for black pepper).  These immature berries are soaked in brine to preserve their green colour then air-dried.  They are hot and fiery, retaining many of the characteristics of fresh unripe berries picked straight from the vine; green pepper is the Beaujolais Nouveau of the spice industry – bright, simple and lacking some depth.

For black pepper, the berries are picked whilst still green but almost ripe during December through to February in India; the farmers are looking to pick when 1 or 2 berries in the pepper spikes are turning from green to orange.  After harvesting, the immature green berries are stripped from the stems mechanically and then lightly fermented by drying in the sun, spread out on large concrete yards.  During drying which takes about 7 days, the berry shrivels, taking on the classic wrinkled look and turns a black or dark brown colour; it takes 1 – 2 days to turn from green to brown and the remainder to dry out. 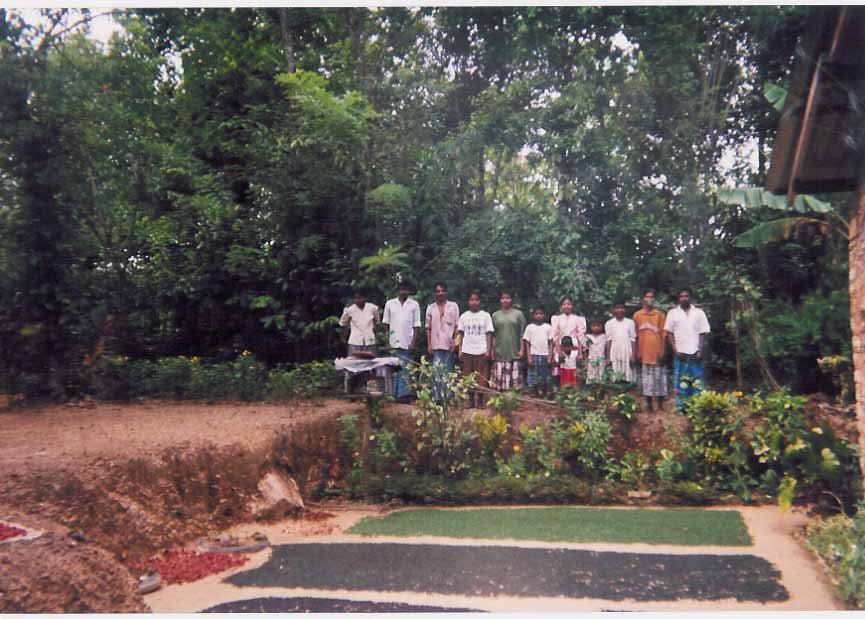 White peppercorns are allowed to ripen more fully on the vine, being picked around March in Southern India when the spikes are fully ripened and a colourful orange-red.  After drying, the outer shell is removed in a constantly flowing stream of cool water until the black outer shell loosens (this process is called “retting”), yielding a clean, white corn through rubbing or trampling the dampened peppercorns.  White pepper has a more intense heat than black pepper with a deeper richer flavour.

Red peppercorns are fully mature pepper berries and are rare, as you need to keep the berries on the vine longer and they reduce the yield from pepper vine in the following year.  They are picked in April/May.  The flavour is quite fruity and less intensely peppery than green, black or white pepper; I actually don’t really like the flavour as it seems too sweet and fruity for me, but that is probably just a case of being used to black peppercorns and being conditioned to expect a particular aroma and flavour.

Is organic really any different?

When quality brings no extra money and margins are preciously thin, pepper growers cannot take any chances – the longer the berries stay on the vine, the greater the risk that they will be eaten by birds or the crop will be lost in a storm.  So pepper berries are treated to grow faster, yield more and are picked as early as possible – just like intensively farmed tomatoes.

We sell a relatively large quantity (by volume) of our pepper into the food manufacturing industry and I have never once in the last 4 years (we started in 2003 and only really began selling bulk in 2004) been queried about the organoleptic qualities of the pepper (i.e. aroma, flavour, colour) by a single buyer.  Quality to the food industry means price and low microbial levels on the peppercorns rather than aroma or flavour, i.e. quality actually equates to money and risk aversion and not flavour.

However, at Steenbergs, we do care about the type and flavour of Steenbergs organic pepper, so we carefully select and grade the pepper that we purchase.MG1 is already a step up from other peppers, with peppercorns that are larger and more consistent in flavour that you will typically find in supermarkets.  The Tellicherry grades are even better than the small ones for the same reason that vine-ripened tomatoes, fresh from the garden in August taste better than shelf-ripened tomatoes from the supermarket in January.

Going back to the tomato analogy, a tomato vine produces something that looks like a tomato fairly quickly, but it is only in the final weeks of ripening that the true deep-red tomato colour and its rich, sweet flavour fully develops.  Peppercorns are the same – immature fast-growing pepper is still nice, but it is the slower-growing specialist varieties of pepper that have then been given that extra ripening time on the vine that makes the trip from India to Britain really worthwhile.

We think that the best black pepper comes from Kerala in Southern India, where the best Tellicherry grades are grown.  Indian pepper has a fruity aroma and a clean bite.

Indonesian lampong pepper (from Southern Sumatra) is highly favoured in America where they like its higher level of piperine and lower level of essential oil – I think this harks back to the history of the spice trade where American pepper originally came from Sumatra and was imported into Salem, Massachusetts.  Lampong pepper is more pungent than aromatic, with smaller berries that are grey-black in colour.

Sarawak pepper from Malaysia has a milder aroma than Indonesian berries, but is hot and biting.  Brazilian pepper has a low piperine content and is rather bland.  Vietnamese pepper is light in colour, mild and uninteresting in flavour – but it is very cheap!

Like all agricultural crops, pepper vines are susceptible to pest and diseases, ranging from the destructive fungal disease – quick wilt disease – through to nematode infestations that attack the root systems or pollu beetle attack, to name just a few.  Chemical treatments for these include Bordeaux mixture, carbofuran and methyl bromide.

Post-harvest treatment is, also, common to provide broad spectrum control of disease and insects and target possible fungal growth and aflatoxins.  Treatment is typically fumigation and ethylene oxide prior to shipment and then heat treatment on arrival.  Irradiation (if ever) is rarely used from British spices.

The use of synthetic fertilisers is common, especially among the intensive, high-yield pepper growers in Brazil, Indonesia and Vietnam.

I have calculated that 17% of the farmgate cost of farming normal pepper relates to chemical inputs – this excludes any post-harvest treatments.