Stir It Up - Recipe For Christmas cake

It’s time for the Christmas countdown and preparations have now begun in earnest – it’s getting darker and the kids are now on half term.

We’ve had Diwali and Halloween parties are nearly over – our kids have had Fright Night parties on 23rd and 24th October.  Soon it will be Mischief Night, Trick or Treating and Guy Fawkes Night (or to be more politically correct Bonfire Night).  You may note that my timing seems off, but in Yorkshire, Mischief Night is on 4th November (ie the night before Guy Fawkes Night) rather than on 30th October, the night before Halloween which Canada, Ireland, Scotland and the United States celebrate.

So it’s time to stir it up and get making your Christmas tree (apologies to Bob Marley, although I did make this to his greatest hits album).  As a spice merchant and a complete enthusiast for exotic raw ingredients, the British Christmas is just the best.

It’s redolent with the smells of a history trail of the exotic and the rare: cinnamon from Ceylon to conjur up the Queen of Sheba, nutmeg, cloves and mace that reminisce of the spice islands, preserved ginger from Canton, dark muscovado sugar that oozes blackly from the Caribbean.  Then there are the dried fruits and nuts that remind us that getting fruits in the dark, winter months was impossible so dried apricots, glace cherries and candied peel, together with almonds were the height of luxury and sophistication even if now they are hidden on the wholefoods aisle in the supermarket.

I love the thick, rich mass of fruits and nuts that are barely held together by the thick gluey flour, sugar and eggs that we flavour with a good whisky.  I like whisky rather than brandy or rum, as it seems more authentic.  I use a single malt from Bruichladdich on Islay with its peaty nose and no artificial caramel colours, so it’s a lighter, less golden colour than the classic blended whiskies.  Note that I don't use an organic whisky as the only one I have come acrosstastes like kerosene, even if it holds a Royal Warrant from the Prince of Wales;  it was so bad that I chucked away three-quarters of the bottle. 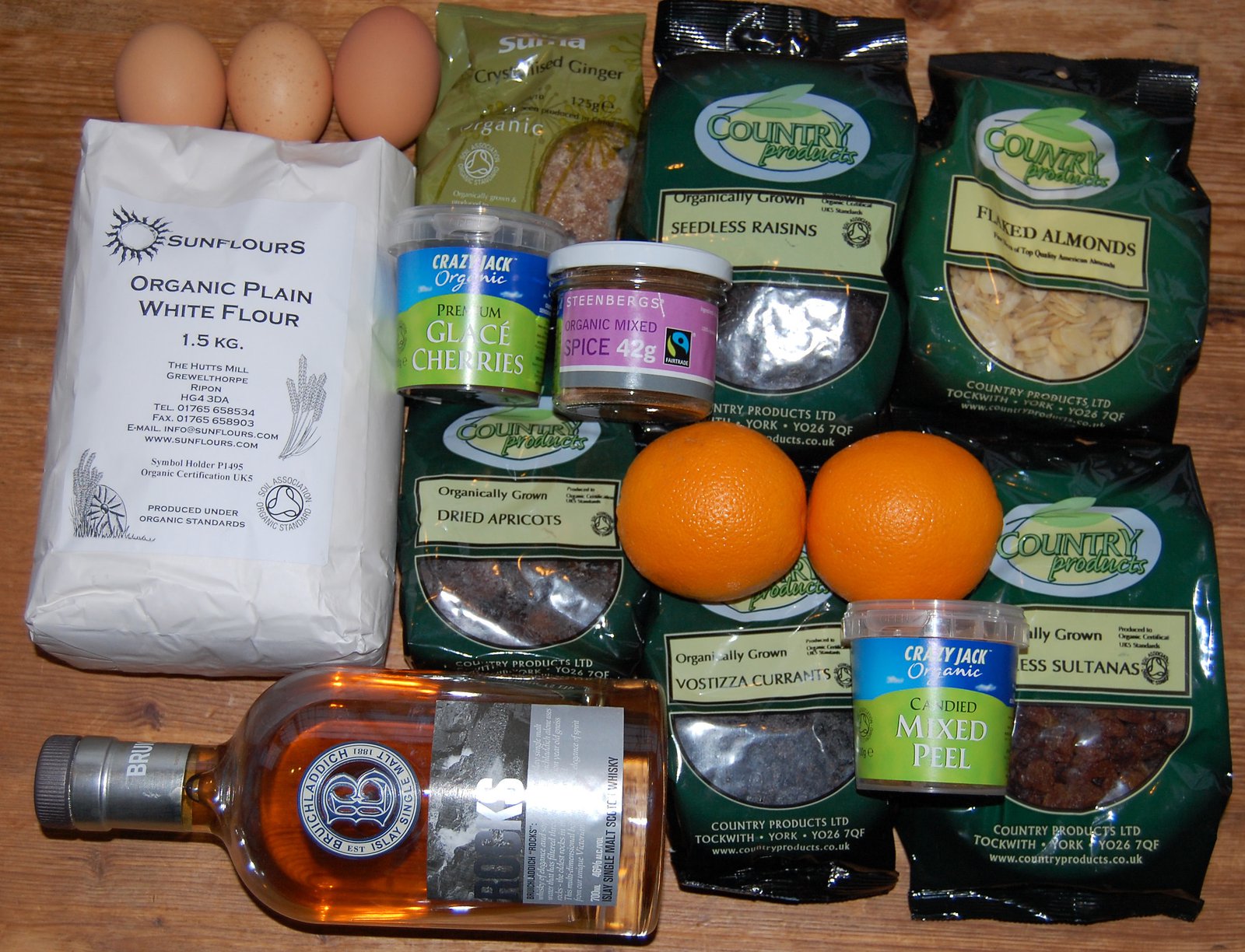 1.  Butter a 25cm cake tin and line with greaseproof paper.

2.  Beat together the butter and sugar until the mixture is very well mixed and fluffy. 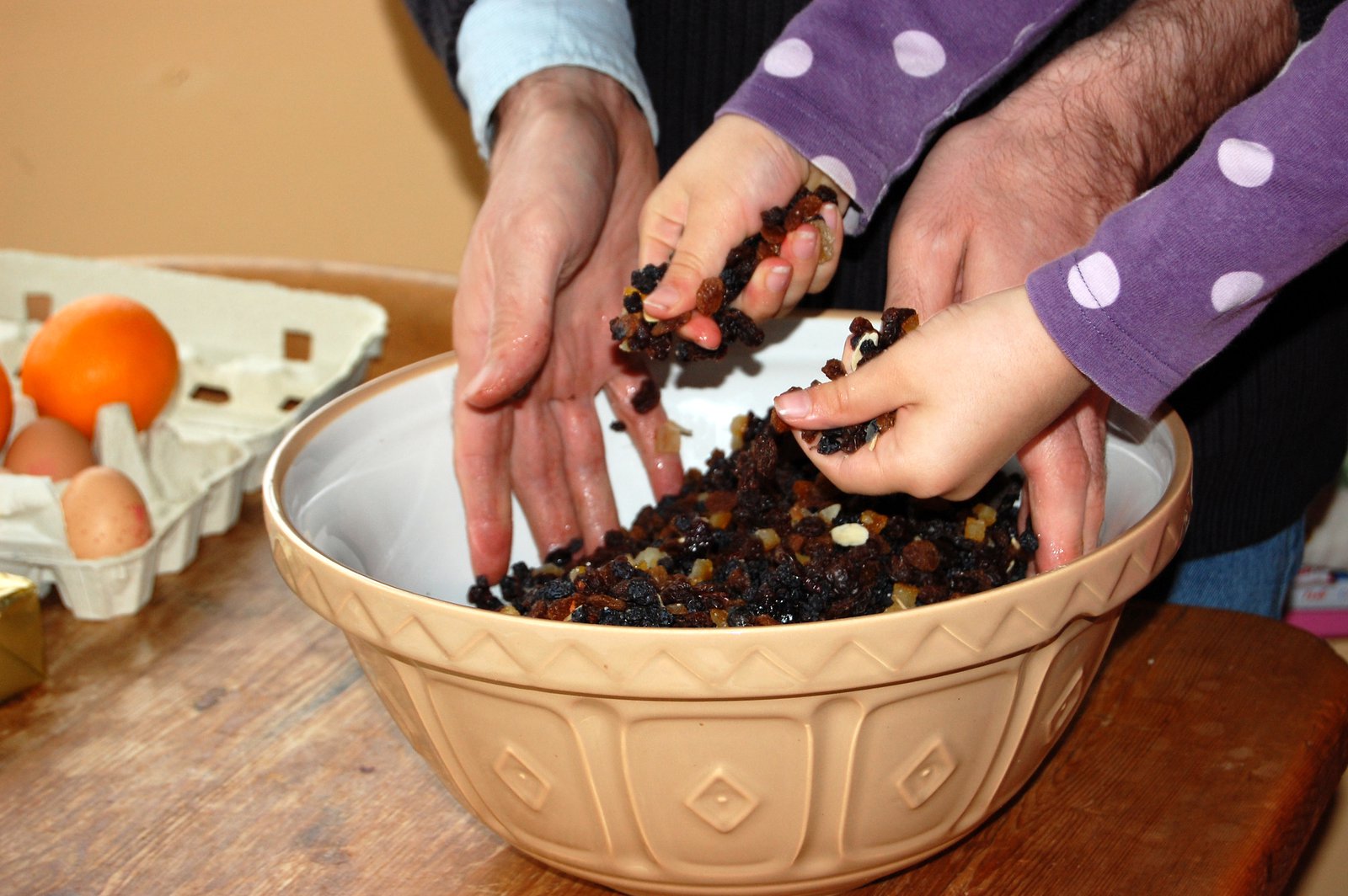 3.  In a large bowl, mix together all the organic dried fruits and toasted flaked almonds. Sieve in about half of the organic flour and organic spices and mix well, using your hands.  My daughter enjoyed helping here, getting her hands nice and sticky.

4.  Beat the eggs into the butter and Fairtrade sugar mixture, alternating with the remaining flour and spices. Beat in the orange and lemon rinds.

5.  Mix in the flour-coated fruits and organic nuts, mixing really well, and lastly mix in the alcohol. 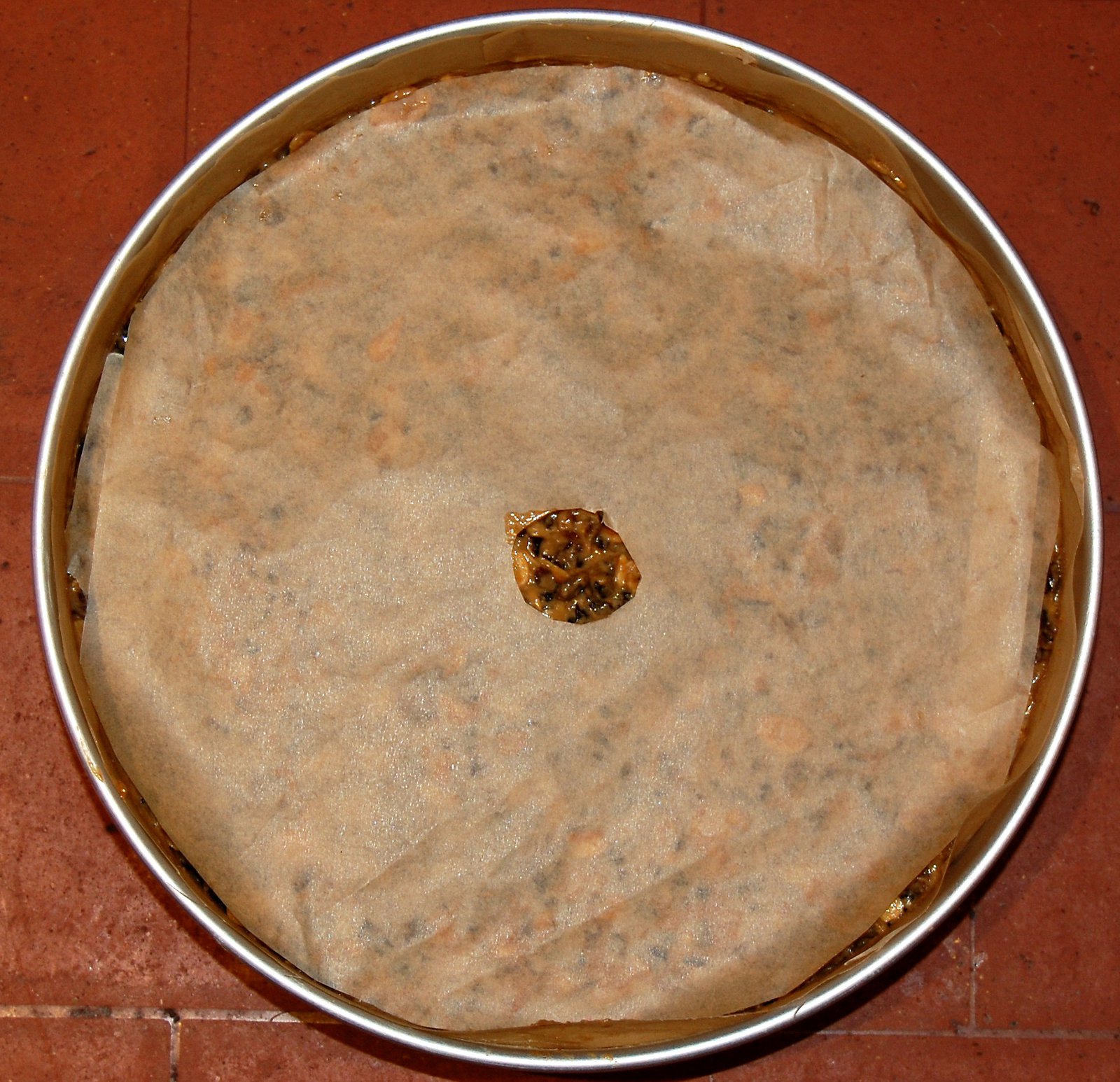 6.  Pour into the cake tin, smoothing it even and then hollow out the middle with the back of a wooden spoon.   Cover the cake in a circle of greaseproof paper with a small circle cut out of the centre about 5cm in diameter - this protects the cake during the long baking time as I have found many of the recipes result in a burnt, dry cake, including the iconic recipe from Delia Smith (perhaps modern ovens are much hotter or drier than older models).   My mum even wraps the outside of cake tin in a double layer of baking parchment further to protect the cake from burning - I don't think that this is necessary unless you are cooking for longer than 4 hours. 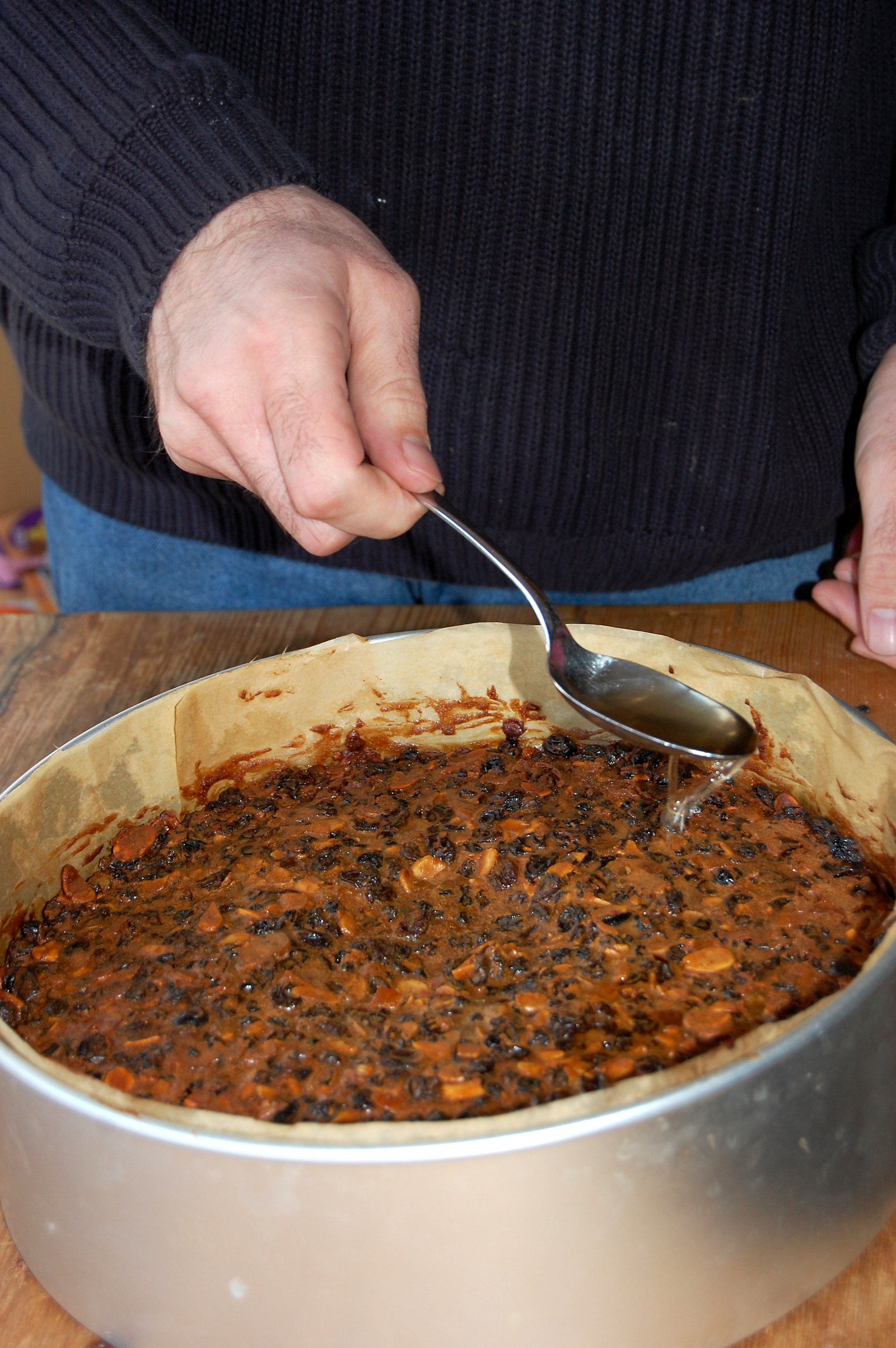 8.  Take out the cake and cool in its tin. When cold, skewer into the cake in as many places as you want, then pour some whisky or brandy over the cake; leave for a few minutes, then tip out of tin, wrap tightly and store until you're ready to add it a bit more alcohol.

9.  At the start of December, you should unwrap the cake and pour a little bit more whisky or brandy over the cake and then seal it back up again.

10.  Wrap tightly and store until you're ready to marzipan and ice the cake.